I am pleased to announce a new contributor to this blog, Steve Reed, who had recently launched the Quatermass Pit website and also has a blog about the subject. I, of course, wish his first post could have been about a more cheerful subject, but it is with deep regret that we must announce the passing away of one of Hammer's most talented actresses, Hazel Court.

Sad news reached us today, that Horror Queen Hazel Court, died on the 15th April 2008. Hazel who was 82, had been suffering from a yet undisclosed long term illness. Hazel was born in Birmingham in the UK on the 10th of February 1926. She entered Gainsborough Studios during WWII, & stayed there for several years, during which she became known as one of ‘The Gainsborough Girls’. Her first starring role being in the 1944 film Champagne Charlie in which she had a very small role, the role would lead to bigger parts for Court. After the War she married her first husband Dermot Walsh in 1949, to whom she would remain married to until their divorce in 1963. 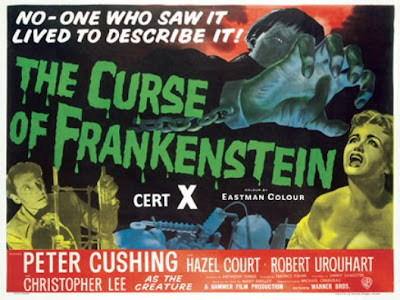 Above: The UK poster for The Curse of Frankenstein, Hazel’s first Horror role.

During the early 1950s Hazel would appear in an assortment of movies for various film companies including The Rank Organisation. Amongst those films were The Ghost Ship (1952) & Devil Girl From Mars (1954), but her major starring role came when Hammer Films, who then specialised in low budget thrillers & science fiction adaptations from radio & TV gave Hazel the role of Elizabeth in The Curse of Frankenstein in 1957, in which she teamed up with the then to become Horror film legends – Peter Cushing & Christopher Lee. The film went on to worldwide success, breaking box office records around the world, Hazel would soon find herself with offers for all manner of film & TV work. 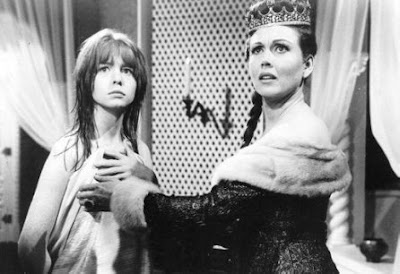 Above: Hazel Court & Jane Asher in Roger Corman’s The Masque of Red Death


Her next work for Hammer was the 1959 film The Man Who Could Cheat Death, in which she would again work with Christopher Lee & electrifying German actor Anton Diffring. In 1962 she would start work on what would be 3 very different films for director American director Roger Corman, the first being Premature Burial in which she co-starred with actor Ray Milland. Her next Corman film was The Raven with Boris Karloff, but undoubtedly her best film of that era was the superb Corman made The Masque of Red Death in 1964 with Vincent Price. Hazel re-married in 1964 to actor/director Don Taylor with whom she had 1 child. Hazel continued to work in film & television in the USA up until 1981. Hazel then settled for a life of painting, for which she had a real passion. She would also be a regular at some of the organised Horror conventions, including Hammer. Her autobiography Hazel Court – Horror Queen, An Autobiography was published by Tomahawk Press in 2007.