This article was first previously published on my now defunct Hammer Glamour website. For this blog post I have only made slight modifications. At the time it was the only overview online about her musical career but since it got posted Karl Sherlock's Numa Records - The Formative Years has added a great section on Caroline Munro with info and record scans that far FAR surpasses mine though I was able to also help him out with the scans and tracks for Caroline's Convention Demo Tape. Definitely do check them out for a more complete overview of this part of Caroline's career. In actual fact just by reviewing their pages for today's updates was I even made aware of Munro's husband/wife collaborations with Judd Hamilton in the 1970s!


At the time of writing the first version of this article YouTube wasn't even around. Nowadays, however, exploring her musical career has never been easier and I dropped most of the scans I had posted (and long lost again in Cyberspace) for YouTube clips.


This article is probably a bit past its sell-by date but blogging about Caroline Munro's music videos made me recall it and bring it out of the cupboard.


Throughout her career, Caroline Munro repeatedly tried to break into the music business. In actual fact, prior to ever getting into modelling or acting and while still at school at the age of 16, she recorded a cover version of Tar and Cement together with Eric Clapton, Ginger Baker and Jack Bruce of Cream and Steve Howes of Yes as backing musicians. For a good while that single has been something of a Holy Grail for Munro Collectors as it was quite difficult to trace and also proved expensive enough due to her now famous fellow musicians involved in it at the start of their own careers but nothing stays obscure for too long these days and it has since found its way to YouTube and elsewhere. It’s a cheerful ditty tune that will keep you humming throughout the day and quite possibly the best song she has ever recorded.

In the subsequent years she became quite successful as a model and poster girl for Lamb’s Navy Rum and also started a promising acting career. She also appeared as the cover girl on some albums. In 1972 e.g. she appeared as an archer in Robin Hood gear on the front and back cover of Hot Hits 11. She also appeared on the cover of a Top of the Pops sleeve. Some more cover appearances have since been posted on Karl Sherlock's tribute (even though I don't think the Europa Hitparade is Munro). 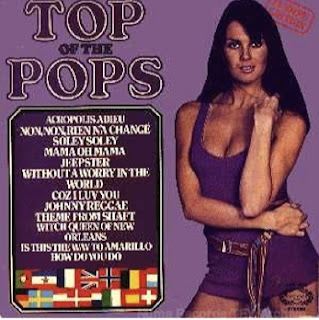 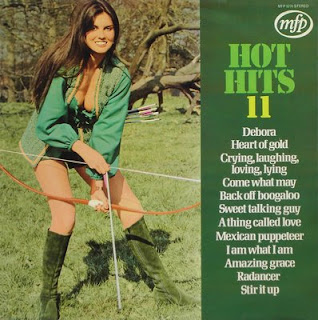 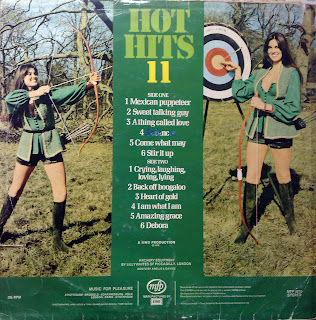 In 1971 Caroline Munro did not just appear as a cover girl but in actual fact was also the subject of a song herself! For his first solo album "One Year" Colin Blunstone, lead singer of The Zombies, wrote a song called Caroline Goodbye about the breakup of their relationship.

Caroline’s most famous recording was Gary Numan’s production Pump Me Up. The single was released in 1984 and also featured Numan on keyboards and backing vocals. It’s recorded in typical Numan style, i.e. her voice is completely drowned in some monotonous synthesiser sounds and it's hard to understand what she's singing.

The B-Side, The Picture, is actually much better. In that song she sounds very much Blondie’ish.

Caroline was so serious about trying to get a break as a pop star that she even accepted a singing cameo in Don’t Open ‘Til Christmas in 1984 and co-wrote the song Warrior of Love. Little did she know that her one-day shot was turned into a "starring" role for her on the film’s posters thanks to the producers’ savvy marketing tactics.

Over the next couple of years, Caroline made only a handful of films and concentrated more on her family and raising her young kids. In the second half of the 1990s she rekindled her career by starting to run her own fan club. Again very keen on making it as a singer, she produced a private tape with excerpts of Warrior of Love, the very Country & Westernish Everything I Need and Numan’s Pump Me Up. On that tape she also spoke and introduced the songs and excerpts. The tape was distributed around "The Monster Model Fest ‘96" in Framingham, Massachusetts. 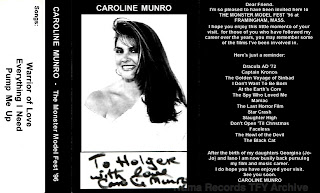 Shortly later she teamed up with fellow musician Gary Wilson and – under the name of Wilson Munro – recorded a CD with cover versions of Let It Be Me, Everlasting Love and Cruisin’, a tune written by Wilson's cousin Clive Wilson and Brian Hodgson, two long standing session musicians. Clive played the guitars on that CD as well and was also involved in Christopher Lee's recordings of It's Now Or Never and Wanderin' Star. The tunes on the Wilson Munro CD are easy enough to listen to, but unfortunately Wilson’s voice is stronger than Caroline’s and she often comes across as little more than a prominent backing musician. The CD was sold via her Official Fan Club. 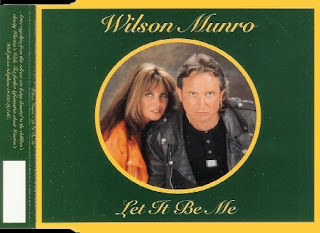 Her most successful recording was actually not a musical tune, but rather an audio CD for Big Finish’s Dr Who Adventure Omega, released in 2003! Though at times hard to follow for someone not too familiar with the good Doctor, this CD is nonetheless a Must for Caroline Munro Fans as this is by far the best acting she ever did. It’s hard to believe that this is the lady who was dubbed in most of her important roles. Caroline really takes very well to the audio medium and I would sure love to hear more from her in that kind of production. Her voice is amazing: soothing, sexy, ironic, stern, whatever it needs to be. And to think that she was worried about the production because of her dyslexia is unbelievable. Her performance is nothing short but a revelation. The CD is still available from Amazon UK.

Posted by Holger Haase at 1:20 PM 4 comments: Links to this post

An article in the Clacton Gazette informed me that Clacton's very own country singer Gary Curtis has just recorded a new charity single, Life is for the Living, featuring Caroline Munro in its accompanying video.

Gary Curtis is also known as Gary Wilson and a while back as "Wilson Munro" the two of them together had already recorded a 3-song CD. In actual fact the photo of them at about the 01:30 mark shows a promotional picture of them in younger years from that very CD release.

Can't say that this will ever be in the Top 100 of my favourite songs ever but it's good to see Caroline again in a music video.

Of course this is not the first time that we see her in a music video. The 1982 video for Adam Ant's debut single as a solo musician, Goody Two Shoes, featured Caroline Munro as a stern and stuck up member of the press corps who literally lets her hair down for the musician.

Also look out for veteran comedian Graham Stark as the butler.

Less famous than Goody Two Shoes is Meat Loaf's If You Really Want To, probably the only one of his classic songs that didn't become hugely succesful. But what a video and what a chance for Caroline to shine for the first and only time ever as a....

Ah well, don't want to ruin the surprise for those of you who may never have watched that video before.

Though she has over the years recorded a number of songs - Mental reminder that I need to transfer my old Discography article over from my now-defunct Hammer Glamour site – Caroline has never really recorded a proper music video for any of her songs. The closest she came to it is this clip of her cameo appearance from Don't Open Till Christmas singing Warrior of Love.

Posted by Holger Haase at 7:53 PM No comments: Links to this post

Dave Worrall and Lee Pfeiffer, the authors of Cinema Sex Sirens, are the brains behind CINEMA RETRO. Dedicated to the films of the 1960s and 70s this is the only professional magazine these days I still subscribe to. And so should you if you haven't: The magazine consistently publishes very well researched, in-depth and beautifully illustrated articles often with the involvement of the men and women behind those flicks. Their look into The Men from U.N.C.L.E. movies e.g. lasted so many issues that a compilation of these articles would easily make up a proper book in its own rights.

In actual fact that publication is so good you may not just want to purchase their magazines once but even twice just so you have a spare copy to auction off once the mags are all sold out. Their Where Eagles Dare Special Edition from just about three or so years ago now easily commands prices in the $100 range.

Just goes to prove that Worrall and Pfeiffer clearly know their stuff.

So when they promise a coffee table book dedicated to the 1960s/70s sex sirens you bet that I'm all over it.

Those two decades with their more free spirited approach to sexuality and nudity rolled out new kinds of athletic female sex symbols that were all stunning, luscious and wonderfully uninhibited with not a Size 0 anywhere in sight. These beauties were often the focal point in horror, spy and (s)exploitation films (and their accompanying posters). Not a lot of modern female stars are still oozing this kind of glamorous jet setting mystique. As the promotional campaign for this book emphasised: They sure don't make'em like they used to.

The concept is very similar to Marcus Hearn's Hammer Glamour from a while back. All actresses get anything between 2-6 pages. A short biographical overview of generally one, sometimes two pages will not, ahem, reveal anything majorly new if you are already familiar with the ladies in question though serves as a good spring board to the primary raison d'etre behind the tome: the photos.

The book is richly illustrated with good quality reproductions of promotional photos and cult film posters. This being the Internet age it's hard to really describe a lot of those pics as “rare” but as usual it's nice to have them all available in one single publication.

The book is divided into three main sections dealing with Hollywood Sex Symbols from Raquel Welch to Natalie Wood (and also including Russ Meyer gals and Blaxploitation favourites), the Continentals (e.g. Ursula Andress, Senta Berger, Sylva Koscina and a number of giallo references) and Brit Glamour. The last section contains chapters on some of the more prominent Hammer Glamour ladies (such as Ingrid Pitt, Caroline Munro, Madeline Smith).

One potent reminder about the quality of the images in this publication is when I discovered to my initial dismay that one of the pages had been ripped out prior to shipment by either a Sharon Tate or Mamie Van Doren Fan working for The Book Depository. The issue was quickly resolved and I was promised a pristine new copy so my inital annoyance quickly made way to an ironic acknowledgement that even in the year 2012 these ladies still literally have pin-up appeal.

All those list-style books by their nature have omissions and for me it is unfathomable that Jacqueline Bisset doesn't even appear to warrant a single name check in one of the overview chapters. Still even with that omission this book is just as glamorous and gorgeous as the ladies it portrays though maybe not quite as in-depth and essential as the magazine it spawned from.

A Foreword is provided by Roger Moore. 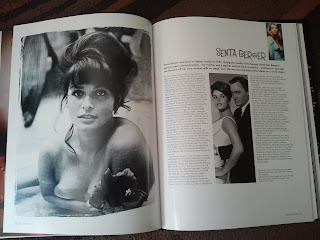 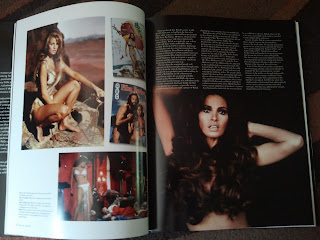 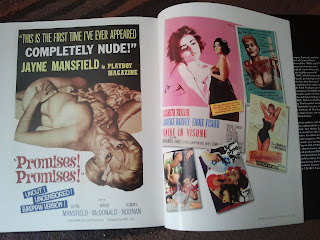 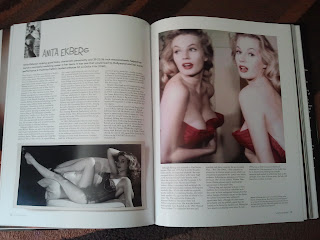 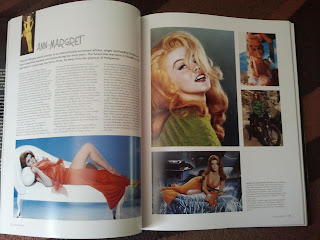 Posted by Holger Haase at 4:57 PM 3 comments: Links to this post