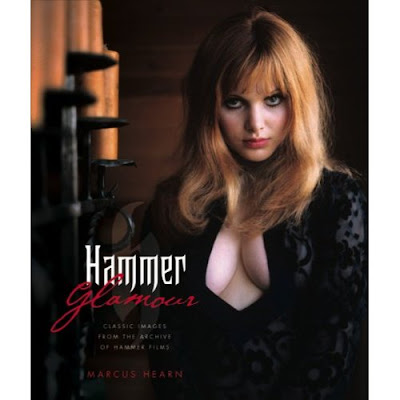 Anyone who has followed this blog for some time knows about my love for Hammer Glamour. Indeed this blog started as a companion piece to a Hammer Glamour website I had started all those years ago as I couldn't find enough info on the ladies of Hammer around. The website has now been moribund for a while and I am primarily focused on “Hammer and Beyond” as a more effective way to communicate with other Hammer Fans, but the glamour aspect of all things Hammer always remained close to my heart.

A few years ago I nearly wetted myself reading about a project Tim Greaves appeared to be involved in about this subject and got very disappointed when nothing came of it. Now Marcus Hearn, one of the most notable Hammer historians, comes on the scene with this lavishly illustrated book that appears to be fully endorsed by the new Hammer company.

Hammer Glamour is an overview over 50 actresses associated with this studio. Another 25 ladies receive a short honorary mention in an appendix.

A dream come true for this fanboy, but have all my expectations been met?

Well, to a degree.

Hammer Glamour is indeed a worthwhile purchase, full of info and photos of the lovely actresses that more often than not often quickly faded back into obscurity once they had their 15 minutes of fame through Hammer.

There are, however, a number of niggles I am having with this book.

To start with I found that a number of – in my opinion – essential Hammer Glamour representatives were notably missing from the list. True, any list selection since time began has always been up for debate, but am I the only one who thinks that the likes of Dana Gillespie, Kirsten Betts, Pippa Steele or Ralph Bates' wife Virgina Wetherell deserve a full entry (or at least a short mention in the book's end chapter)? I would think that either one of those are more bona fide representatives of Hammer Glamour than, say, the like of Stephanie Powers who did indeed get a full entry.

The 50 ladies that are fully, ahem, covered in this tome all either get two or four pages. In terms of text the difference between two or four pages doesn't actually make that much of a difference as this is primarily a book of illustrations - the cover even highlights that the book's raison d'etre are “Classic Images from the Archive of Hammer Films – and what is covered textwise is not necessarily ground breaking.

The actresses suffering the most from this lack of info are the more established ones that actually had a proper career. I'd liked to have read more about life outside of Hammer for quite a number of them. From Ursula Andress' large oeuvre only a small number of titles are even referenced. Caroline Munro's musical career is ignored and Starcrash isn't even mentioned. And it would have been nice to read a bit more about Ingrid Pitt's writing career than just a cursory mention of two of her publications.

The one actress who is hurt the most by this piecemeal approach is Barbara Shelley, “Hammer's most prolific female star”. Even her Hammer entries don't get full coverage with The Gorgon and Shadow of the Cat both only mentioned in passing within one and the same sentence.

Chances are that if you are already somewhat familiar with the careers of the actresses in question, you are not going to learn anything majorly new about them through this book.

So how do the pictures fare?

Well, I can safely say that Hammer Glamour is indeed a feast for the eyes. Even though about half of the pictures published looked at least somewhat familiar to me, I can't remember ever having seen them reproduced that splendidly. The most revealing picture (no pun intended) for me was one with Susan Denberg in leather gear on a very familiar looking motorbike. Only when I read the caption did I realise that this was a publicity photo taken for the title role of Girl on a Motorcyle, a part Denberg ultimately lost due to a drug overdose to Marianne Faithfull!

If this sounds as if I may have emphasised the negative a bit too much: Although this book is not quite the be-all and end-all that I had initially envisioned it to be (admittedly my expectations were huge), I do feel this is a tome that every Hammer and especially Hammer Glamour Fan should own. It's a quick, but magnificently illustrated read and a book that will look stunning on every coffee table.

Even though I was mildly disappointed about some of the issues that I had with this one I can now officially put my own Hammer Glamour site to rest. It will remain online, but I will no longer update anything on it and instead fully focus on this blog.

Looking into my crystal ball I also sense that, should this publication prove a success, that a further follow up to this book may be made available soon focusing on the male talent in front of the camera. And niggles or not, I'd be the first to purchase that one if it ever comes around.

Thanks for sharing. I did not know this existed. I will definately pick this one up.

No Virginia Wetherell = bummer, no doubt about it. But even so, I can't wait to get my hands on this!

I got my copy today, and I was very excited to look at it. It has so many beautiful photos, a lot I've never seen before. My two favorites: The Valerie Leon full page photo and the Jennifer Daniel full page photo.

It's a wonderful book, but I actually wish it had been twice as thick!! I just can't get enough!

I am actually long time fan of the Heresie site. Definitely well worth checking out.