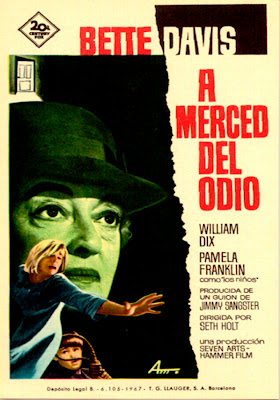 ***WARNING! Short as this piece is, it may contain some SPOILERS if you are not already familiar with the film****

Slowly, very very slowly, making my way through the mammoth Ultimate Hammer Collection set of 21 Hammer DVDs I recently caught The Nanny for the very first time and was quite pleasantly surprised.

Another aspect of the film that I was unaware off was the absence of practically any sympathetic character. Hammer had at a time played with formats that offered no obvious positive characters to identify with as a viewer (most notably in my opinion in their underappreciated Dennis Wheatley adaptation The Lost Continent (1968)), but this was still a very unusual approach for screen writer Jimmy Sangster: The husband (James Villiers) is a bully, the wife (Wendy Craig) hysterical. Even the little boy (William Dix) is a brat who regularly fakes his suicide a la the later Harold and Maude and often has the viewer feel quite sorry for Bette Davis’ character who often comes across as the only sane person of the lot. As such there is indeed a certain amount of welcome suspense left as to whether her nanny really is a deranged psycho killer or whether this is just part of the boy’s vivid imagination.

Directed by Seth Holt - who died when filming of Blood of the Mummy’s Tomb (1971) had started and who was also responsible for Hammer’s equally intriguing Taste of Fear (1961) - this is one of Hammer’s best psycho thrillers. Well acted and tightly written, this is a Must See for anyone willing to stray away from Hammer’s usual Gothic tracks.