As part of the 999 Challenge I promised I’d watch 9 movies in the cinema and blog about them this year, even if there were no connections to Hammer.

So I thought I’d go off to a good start and managed to catch two that I would both whole heartedly recommend (even though none of them are flawless). 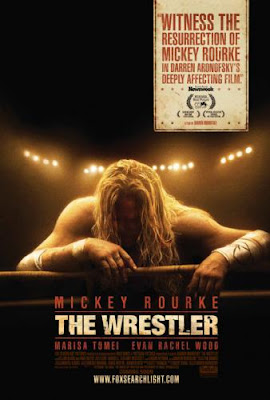 Must admit I always liked Mickey Rourke right from the start and had watched pretty much all his 80s stuff when it first came out and then, like so many others, thought he’d gone off his game when he turned to pro-boxing, however, over the last couple of years realised that rather than to be questioned about this (and some other decisions he made), he should be lauded for simply sticking to his guns and doing what he wanted to do, living his life according to his own rules. Really, how many people can seriously claim to do so?

Whereas most reviewers name Sin City as the comeback point in his career, I re-discovered him a few years earlier when to my utmost surprise I noticed that it was his character who beat Enrique Iglesias to a pulp in the video to the obnoxious Hero single. And who could forget his appearance in Robert Rodriguez’ excellent Once Upon a Time in Mexico, a film that is chockfull with eccentric characters, none more so than Mickey Rourke with his handful of small designer dogs.

Rourke, the former pretty boy, now has a physique that is as rugged as the Grand Canyon and a voice that could give Batman a run for his money and his Wrestler is a character in the tradition of the good old classic American anti-heroes, a Hemingway type of character who does what he has to do regardless of the outcome for himself. It is refreshing to see a US production that does not revel in “winning” but for a change again just focuses on “doing” and being true to yourself. Too much time over the years has been spent on feel good movies that celebrate physical victory and ignoring the fact that sometimes those deemed “losers” (oh, how I hate that word) make much more interesting characters in a story.

His portrayal as Randy “The Ram” Robinson is clearly auto-biographical and the speech he holds towards the end of the film has definitely been written with Rourke in mind and I wouldn’t be surprised if he hadn’t even had a say in it himself.

Marisa Tomei is in this one, too, and she also received an Oscar nomination as the aging stripper Rourke is involved with. Aging stripper? Hell, it wasn’t all that long ago that she was the Next Big Thing to watch out for. Damn, I am feeling old. This is also a career high for Tomei who has never before shown herself so revealing, both physically (niiiiiiiicccceeee) and emotionally. The original My Bloody Valentine had eluded me up until the end of last year when I finally saw it. It soon became one of my favourite slasher movies of all times (OK, admittedly not a genre I am all too fond of to start with) with its unusual settings and memorable characters, original murder pieces starting with the fetishistic scene of the first killing and it had me hooked right until the final credits with this really amazing quasi-folk song about the killings.

As for 3-D movies I always wanted to immerse myself more in them, but the only one I ever caught in a theatre was Comin’ at Ya! and five minutes in the entire audience demanded their money back as the effects weren’t working properly.

So given my low regards for remakes in general and the less than stellar history I had with cinematic 3-D effects I wasn’t too sure what to expect and kept my expectations low, but – Boy! – did I enjoy this one!!!

I can’t recall the last time I had such unadulterated fun with my clothes on. This was definitely one of the most entertaining nights in a cinema in ages. If you have even the slightest inkling of seeing this, make sure you do so before it leaves the theatres as this is something that must be seen on a big screen and unless you have one hell of a home cinema you are not going to enjoy this properly. The 3-D effects are fantastic, not just when they haul things at you (there is one particular, ahem, jaw dropping scene), but more so even when confronted with the claustrophobic environment of the mines. In the middle part it drags a small little bit, but overall it is a rollercoaster ride of a movie and even includes an over the top nude scene, the type that hasn’t been done in a mainstream movie since the 80s.

Without revealing too much it needs to be said, however, that there is one particular plot development that redefines “audience cheat” and is the one sore point in an otherwise fab production. This is especially annoying as it would have taken very little to correct this. No idea, what made them drop the ball when they were previously doing such a great job.

Interestingly enough this is one film where the trailer does NOT give away the best moments or effects.

I really liked The Wrestler also. You are correct though, Mickey Rourke's performance basically was the movie. But still its a memorable performance. He is supposed to be in Iron Man 2 next year. It should prove interesting to see how he handles it.