Save the Bray studios!!!!

I haven't been writing much for this blog lately as I was busy in real life with my German lessons – and yes, I also teach online (just saying.... just in case LOL) -, with my Massage Therapist course, with other articles for other publications that haven't yet been published and with my favourite activity, traveling. I have just come back from visiting family and friends in Germany and will hop off to San Francisco in a few days. Once back from the States I plan on going back to a more regular publishing schedule. What should help is that I now have a copy of the new ICONS OF SUSPENSE in my hands together with ICONS OF HAMMER HORROR and ADVENTURE sets that I hadn't purchased before. The last two are now available for just about $10 each from DeepDiscount.

Together with the final Hammer Noirs that I still need to review that should give me enough to write about for a while.

In the meantime there's been a number of Hammer related news items that I have failed to report on so far so let's start with the most important and groundbreaking news item in ages: 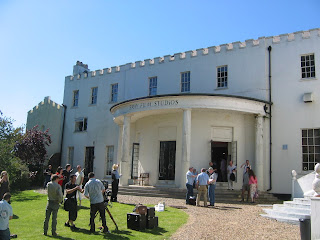 Matthew's review of The Stranger Came to Bray with its emphasis on the Bray locations was timely as the first bit of news is gigantic for anyone even remotely interested in Hammer movies: After nearly 60 years in existence the studios now face demolition to make way for apartments and flat complexes. If this were to happen this would be yet another terrible desctruction of an important piece of British cinema history.

I was honoured to have the chance to visit Bray twice over the last couple of years. And you can read more about this here and here. Those meetings count as some of the most memorable of my time in film fandom, having the chance to meet not only the film makers and fellow fans but also to stand on the very hallow'd grounds that countless classics were filmed in.

Apparently leaving the studios as they are is no longer financially viable and it is hard to see what if anything can be done to stop this from happening. Personally I'd rather see these studios to be converted into, say, a Hammer or general film history museum rather than being converted into such a commercial and totally unrelated project.

Robert Simpson has started a Save Bray Studios Facebook Group to prevent this from happening. Now I am generally very cynical about any of those “Join this group to stop world hunger and child abuse” campaigns but this could just be one campaign worth following as Robert is not only the owner of the Unofficial Hammer Films Site, but has also been involved with Hammer in a lot of different facilities over the years and is currently writing his PhD about “a historical study of the original Exclusive Films, sister company and distribution arm of Hammer Films”.

As such he's been in contact with a number of Hammer and other celebs and his plans seem to include approaching some of those to see if some of the better-known personalities can be convinced to become a prominent figure head for a Save Bray Campaign. He has also just started a new Save Bray Studios Blog and is also available on Twitter.

His campaign is also correctly going to focus on the fact that not only Hammer films were produced in Bray but also a range of other films such as The Rocky Horror Picture Show and episodes of Doctor Who.

So what can you do?

Email ThisBlogThis!Share to TwitterShare to FacebookShare to Pinterest
Labels: Hammer at Bray, News