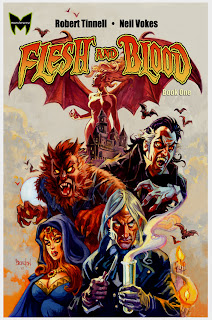 I used to love comic books with a vengeance. And why wouldn't I? They got stories, dialogue, visual effects and cinematic angles just like a movie. In actual fact without real budgetary restraints they could cheaply tell stories that would break many a Hollywood studio's financial back. Given all the technological advances over the last one or two decades there should be a glut of fascinating material out there right now.

Yet for the most part I have given up reading current series.

I was raised with both the US superhero series as well as with a number of European (mainly Franco-Belgian) comic artists. Now that I am living in Ireland I have unfortunately lost track of recent developments “on the Continent” and with regards to the US stuff I have over the years unsubscribed from all of my favourites. Even friendly neighborhood Spiderman doesn't get a look in anymore after “One More Day” too many leaving me with fond memories of Bronze Age comic books that often were far more adult and ground breaking in their approach to story telling than many of the allegedly mature material out there now. 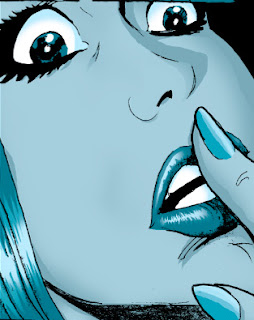 Even more importantly, they did tell stories properly! Little annoys me more in modern comic books than seeing superheroes fight it out over umpteen issues without any proper development. There was a time when it took me a good half an hour to read the 20+ pagers. Now I am glad if I manage five minutes of unimpressive reading time with them.

So have I completely given up on current comics?

Nope, there are some small pockets of resistance around fighting valiantly against the blandness that permeates the industry at large. Chief among them are artist Neil Vokes and writer Robert Tinnell. Then there is also Monsterverse, a new publisher who has recently impressed with his series of Bela Lugosi inspired Tales From the Grave. 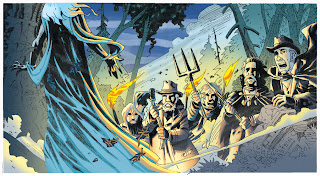 With Flesh and Blood the three have now joined forces for what promises to be a very enjoyable Gothic Glamour ride. The first part of the saga is scheduled to be out in the next couple of days. Interviews with the two creators can be read here and here.

When I first heard about Flesh and Blood the idea was presented as a Hammer movie inspired comic book adventure from fans for fans leaving me with an equal amount of anticipation and reluctance. Anticipation because I love all things Hammer. (What a surprise!) Reluctance because Hammer for me is clearly rooted in the past and I don't particular relish the idea of simple rehashes. This is the year 2011. So please give me something that has a similar feel to the classics but with a modern take to it.

I shouldn't have worried.

Flesh and Blood is all that I hoped for and more. 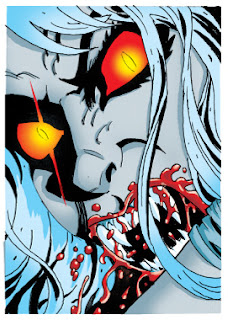 Following the killing of Carmilla Karnstein, a motely crue of heroes and anti-heroes join forces in an epic power struggle against Evil lead by the one and only Prince of Darkness, Dracula.

The comic has all the characters one would expect from a Hammer (or indeed even a Universal) Monster Mash: Carmilla, Dracula, Frankenstein and a Werewolf. Even lesser known characters like General Spielsdorf from The Vampire Lovers are referenced. And, yes, we even get Van Helsing though in a nice twist not in any form you would have come across before.

Yet though aspects of it will feel familiar to Hammer Fans this is a totally independent story that may borrow from the Hammer mythology and imagery but then develops into something completely unique. The closest point of reference would probably be Kill Bill, a movie that was clearly influenced by a number of Tarantino's favourite genres (Martial Arts movies, Spaghetti Western etc) but then created an artistically unique vision of that world. And though it is fun for the hardcore fan to identify all those points of reference, the movie can be enjoyed without having ever seen a single one of those productions.

Same in Flesh and Blood. 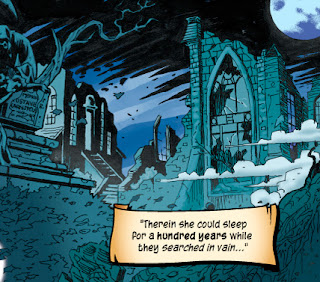 As a Hammerhead I rejoice in identifying panels that were inspired by Frankenstein and the Monster From Hell, character names drawn from the Hammer talent pool (Mr Ward-Baker) or lines of dialogue lifted from Hammer movie titles (“Frankenstein Must Be Destroyed”), yet none of that is essential to the enjoyment. The comic lives and breathes on its own. If you like classic horror stories with a modern twist, then this is for you.

The art work is simply stunning. The only other current artist who draws female characters as sensually as Vokes is Bruce Timm. And ironically both are huge Hammer Fans and have contributed to Little Shoppe of Horrors. Just goes to prove what a positive influence these flicks have on an artist's development.

I have rarely ever seen a comic where every single panel is a little masterpiece that I wouldn't mind have hanging on my walls. The imagery is glamorous, voluptious, moody, atmospheric, haunting and drenched in Bava-esque colours. Truly magnificent. 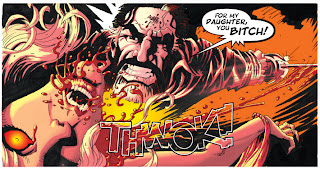 I am reluctant to reveal too much about the story and the teaser panels really speak for themselves. Suffice it to say I am definitely along for the ride. Books like these finally bring that good old comic loving feeling back to me and have me curled up and fully immersed!

It's the first installment in what promises to be an epic adventure with three more volumes following until the conclusion is reached after a total of 320 pages. No doubt Messieurs Vokes and Tinnell have a lot more surprises and gorgeous imagery left in store for us. This is the kind of material that New Hammer should be making if they were really serious about carrying on their tradition.

In the meantime, however, we have Flesh and Blood.

MONSTERVERSE BLACK FRIDAY SALE! Friday through Monday. Everything in the MV Store is marked down! With up to 40% off retail price. FLESH AND BLOOD marked $9.99! LUGOSI COMICS at $2.99 and POSTERS at $5.99. You even get DRAWING MONSTERS AND HEROES for $8.99! Lugosi is laughing manically behind the counter! He is waving his clawed fingers at us, exerting his dark will. We must buy FLESH AND BLOOD. Yes, Master!