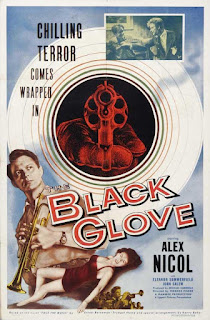 A jetlagged and overworked Jazz musician discovers a fascinating singer. They go to the best spaghetti house in town: her place! There they exchange cheesy quotes from songs about girls who lie and men who cheat. When he leaves the place, he forgets his trumpet and ends up being one of the main suspects when she is discovered killed. He turns amateur sleuth in order to find the real killer.

This very noirish thriller is one of Hammer’s best quota pictures from the early 1950s before they turned into a horror power house. Alex Nichol from South Pacific was Hammer’s American star du jour and was also used as the lead in Hammer’s next movie, The House Across the Lake. Terence Fisher directs and Michael Carreras manages to instill his love for jazz into the production. He can even briefly be glimpsed as one of the Band members in Kenny Baker’s Dozen.

Jazz permeates the entire movie and is the narrative thread that ties it all together: It introduces the main characters who are also repeatedly seen playing it. Jazz records are leads and red herrings in this mystery and Jazz instruments are even seen as potential murder instruments.

The screenplay was adapted from his own novel by Ernest Borneman, a fascinating character, jazz critic and musician, crime fiction writer, dedicated socialist and – most (in)famous of all – well known sexologist. Jimmy Sangster at that stage had not been elevated to writer status yet and acted as Assistant Director. Watch out for Geoffrey Keen who would later appear in many a Bond movie as Sir Frederick Gray.

There is one annoying plot hole when we discover that only two copies of an important demo record were ever pressed yet we can clearly see three copies making the round. Nevertheless the film overall is quite enjoyable especially given the novel jazz twist.

Oh yeah, in the US the film is also known under title The Black Glove, although it completely beats me as to why.