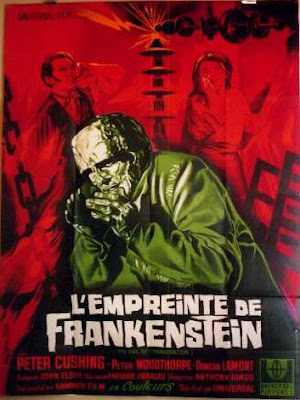 Unlike the two earlier Hammer Frankenstein movies (The Curse of Frankenstein, Revenge of Frankenstein), Hammer now got permission from Universal to use a variation of Karloff's classic Monster make up. Given the fact that for their first two Frankenstein entries, not having the monster make up ended up a blessing as the company was properly able to concentrate on the character of the scientist, rather than the monster, this was a bit of a mixed blessing.

Now they had some monster recognition factor, but not a Karloff (or even Christopher Lee) in it, but a wrestler from New Zealand called Kiwi (sic!) Kingston.

The result is a bit of a mixed affair: There are some ingenious moments in it: It is not Frankenstein but a hypnotist who manages to eventually revive the creature and then uses him to seek revenge on people who done him wrong (traces of Caligari here). The production is well photographed: Little wonder as the director is Oscar award winning cinematographer Freddie Francis.

But for every great element, we have at least an equal amount of duds: Frankenstein is seen acting incredibly foolish insisting he can't afford to be recognised by his peers, then throwing a fit in public that nearly gets him arrested. One moment the castle is unapproachable for him, the next he walks in and out seemingly unobserved.

So it's definitely not one of Hammer's finest, but it is a pleasure to watch and Cushing's acting is absolutely superb.
Posted by Holger Haase at 1:12 PM