This post is written as part of the Hammer/Amicus Blogathon being hosted by Barry_Cinematic and realweegiemidge on Twitter. 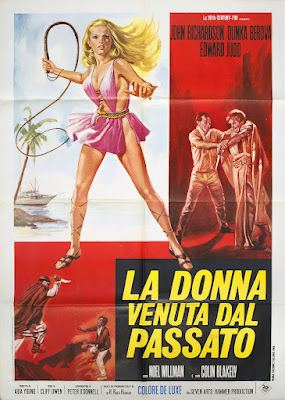 Filmed on location in Israel, She (1965) was Hammer’s most expensive and ambitious project.

A follow-up was inevitable but whereas She was by and large a faithful adaptation of H. Rider Haggard’s original novel, for its sequel The Vengeance of She (1968) Hammer strayed away from the original tales and instead created a new plot courtesy of screen writer Peter O’Donnell.

Haggard’s own literary sequel Ayesha, the Return of She was serialised by “Windsor Magazine” from December 1904 - October 1905 and then published in book form in 1905, 18 years after the original She.

Ayesha takes place two decades after the events of the first book and reunites Horace Holly and Leo “Kallikrates” Vincey from the previous novel hosting a search for Ayesha through Tibet and Asia and eventually back to Africa after they receive indications that She hadn’t died after all all those years ago.

Haggard followed up this novel with two more in that series: She and Allan (1921) - bringing together his two most popular fictional characters, Ayesha and Allan Quatermain - and Wisdom's Daughter (1923), a prequel narrated from Ayesha’s perspective describing her (or should I write: She’s) past life in Ancient Egypt.

Rather than make this yet another period piece and set The Vengeance of She back at the beginning of the 20th Century, screen writer Peter O’Donnell (very likely for budget purposes) created a contemporary follow-up story.

O’Donnell is mainly known as the writer of the Modesty Blaise series of comic strips and novels. He was involved in the writing of Joseph Losey’s 1966 movie with Monica Vitti but was so disappointed with the way the production was developing that prior to the movie’s release he adapted his screenplay into a novel that was to become the first in the series of thirteen Modesty Blaise books.

From 1971 on he also wrote a number of unrelated novels under the pseudonym Madeleine Brent (same initials as Modesty Blaise).

The Vengeance of She was his second and final venture into movie screenwriting though in 1966 he had also written a six part BBC series Take a Pair of Private Eyes about a husband and wife detective team featuring Derek Fowlds and Jeanne Roland.

O’Donnell and Michael Carreras had in the past been discussing a possible screenplay for Modesty Blaise so both were familiar with each other which explains why Carreras opted for him as a screen writer in this production. 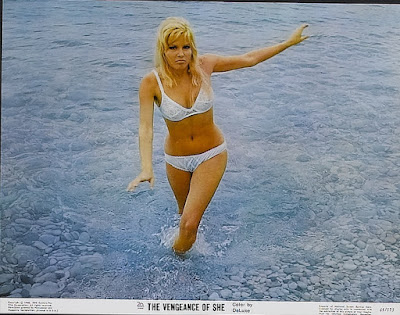 This was director Cliff Owen’s sole Hammer production. In actual fact this was also one of only a very small number of feature films he directed in general. Mainly known (if known at all) as a TV director (most regularly for “ITV Television Playhouse” and “ITV Play of the Week”), he sure was an odd choice to helm this movie.

Towards the end of the shoot producer Aida Young even took over directorial duties when Owen suffered from a slipped disc. The Vengeance of She would be Young’s first full producer credit for Hammer, making her one of the very few female producers at the time.

The main reason for having such a number of Hammer atypical talent involved lies in the fact that The Vengeance of She was - next to The Devil Rides Out, The Lost Continent and The Anniversary - one of four productions that were shot at about the same time so most of their regular house names were therefore otherwise employed.

Filmed between June 26 - September 16, 1967 on location in Monte Carlo and Almeria as well as in Elstree Studios, The Vengeance of She is arguably one of Hammer’s least loved productions. It has been called “a remarkably dull load of hokum” and “a cheap and gaudy piece of mumbo-jumbo”.

I had previously only watched this film once before a long, long time ago and remember enjoying it quite a bit regardless. When I picked this as my choice for the Hammer/Amicus Blogathon a part of me was wanting to give this a re-appraisal after years of bad press. Another part of me, however, was also anxious as to whether or not my opinion may not have radically changed over the decades and maybe, just maybe I may have actually developed a sense of refined taste and class that may have been sorely lacking in my younger years.

I still seem to be the same unsophisticated ingénue I was way back when as I still enjoyed this considerably more than the rest of Hammer (or even: general) fandom appears to do.

I do, however, feel I have also discovered the reason why I dig this more than others.

The Vengeance of She is unlike most other Hammer films regardless of genre. If you were to try and summarise its plot, you would undoubtedly run into major issues as it is hand on heart quite a confusing mess in that regard. 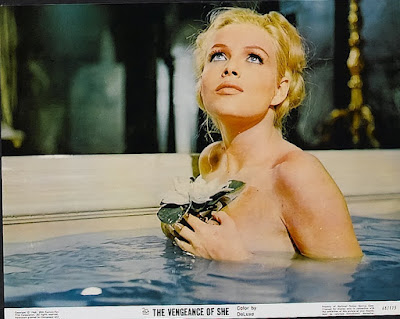 Especially in its first half, the film comes across more like a hallucinatory kind of dream following a mesmerising dream logic when we see Carol, Olinka Berova’s character, mutely stumble across the Southern French landscape, being picked up by a lecherous truck driver who attempts to rape her just to himself be crushed to death by his own vehicle while we hear snazzy variations of the film’s lounge lizardy title tune.

Haunted by visions of a golden statue she finds refuge on a beach in Monaco, then strips to her undies, leaving all the clothes behind (fur coat and all) and swims to a nearby yacht where married playboy George (Colin Blakely) together with his wife (Jill Melford) and friend Philip (Edward Judd) first parties hard, then dramatically sets sail in an attempt to escape from the creditors he owes money to. It is only on open sea that he discovers amnesiac Carol who can’t remember much about her life and what it is that drives her ever further on haunted by her mysterious visions.

Now admittedly that is faint praise given that someone like Franco is a very acquired taste and most film viewers rather stay clear of his style of idiosyncratic film making. I do, however, belong to the minority of fans who actually digs this kind of feverish improvisational style so if you can stomach film making in that vein, then you may also be able to get a kick out of The Vengeance of She.

And if you can’t - and admittedly most won’t be able to do so - well, then you may still consider this a stinker. 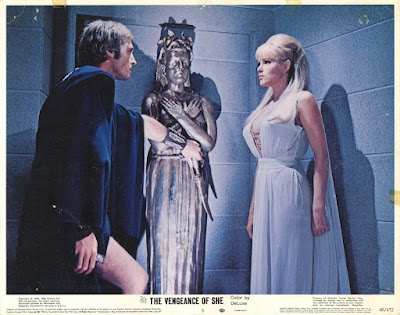 Cause it just continues in similar fashion when we follow the perils of Carol aka the possible re-incarnation of Ayesha being driven ever closer back to Kuma where John Richardson’s Kallikrates under the guidance of Men-Hari (Derek Godfrey) hopes to guide her back through the flames again and resurrect his former lover back to eternal life at his side.

Between Vengeance and the original She there is practically no sense of continuity with regards to the character of Kallikrates. There is no single mention of him ever having been Leo and he appears to have been around for centuries if not millennia as opposed to the few decades between those two Hammer productions.

En route to Kuma Carol stumbles through Northern Africa, finds refuge with a local mystic (André Morell), is in the centre of some cool looking rituals (bearing more than just a little resemblance to Hammer’s Satanic rites in their Dennis Wheatley adaptations), is captured and fetishistically tied up and bound by a white slave trader while being followed by her personal white knight Philip and and and…..

It is only when she and Philip reach Kuma that the feverish surreality of her chase scenes makes way for a more conventional plot of court intrigues that see Kallikrates being manipulated by various fractions around him. For me this is then also when the film does start running out of steam a bit even though we at least get a flash back to the times when Ayesha ruled her kingdom with a merciless hand and enjoyed watching some poor souls being sadistically put to death in front of her eyes.

What we do not see is Ayesha with a whip at hand, an image that featured prominently on the posters and promotional material used to advertise the release of this production. 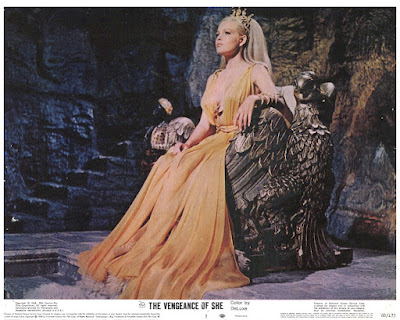 A Deus Ex Machina in the shape of a slave revolt and a poorer rehash of She’s original flame transformation effects rounds up this uneven follow up to Hammer’s biggest adventure films.

Somehow I cannot see this film ever being given a proper critical re-appraisal. Everything about it is second rate. It features none of Hammer’s biggest stars and Olinka Berova, beautiful as she is, cannot hold a candle to Ursula Andress. This is a seriously flawed production no doubt but if you are able to appreciate seeing Hammer emulate contemporary Continental Eurotrash and forsake conventional plot in favour of improvisational and hallucinatory set pieces under the ever memorable tunes of composer Mario Nascimbene, then this just may be for you after all.

A very informative review! 👍
I've never heard of this film or the books, but I'm a fan of the underdog. So now I'm very curious.

Really enjoyed your enthusiastic take on this movie, it does sound like one to watch and it's a shame it did badly back themn. Thanks for bringing this film to the blogathon, and I'm sure it will have more fans after reading this review.

Haven't seen it in a while, but I did watch it a few times back in the day. It has its moments, in fact I seem to remember liking it more the 2nd time, but it can't stand up to the original. Personally, I think setting it in the (then) present day was a mistake - it emphasised that it wasn't a big budget production: some scenes don't look any more bigger scale or cinematic than a 60s TV series. And the ending is a bit predictable.

But it is definitely worth a look.

A fascinating review of an overlooked Hammer film. Based on your descriptions, I would probably have to be in the right mood to watch it, but I'm intrigued nevertheless. Thank you for your contribution to the blogathon!

The Vengeance of She is nowhere near as bad as some critics claim. It ultimately lacks originality, but one can say that about most sequels. It's certainly watchable, though the poster promises a lot more. It features Ms. Berova in a short, skimpy tunic wielding a whip with the tag line: "Kneel before She. The ultimate female who used her beauty to bring kingdoms to their downfall...and men to their knees."

Well, at least Hammer regular Andre Morrell was available for Vengeance! Although I'm not a Hammer completist (at least not yet), I've seen an awful lot of their films from this period, and it seems as if I should have seen this at least once. And yet, the synopsis doesn't ring any bells. Some of the publicity stills make it look intriguing, and I see that it was paired with The Viking Queen on a Hammer Collection Double Feature DVD. It's good that Vengeance didn't disappoint after all these years. I revisit films all the time after long intervals, and mostly I'm not disappointed. But then, I find things to like in stuff that many people regard as irredeemable trash. :)

I haven't seen She or Vengeance of She yet but that is something I hope to correct in the near future. I enjoyed reading your defense of Vengeance because it is an honest appraisal while still acknowledging the film's less than stellar reputation. Nicely done!