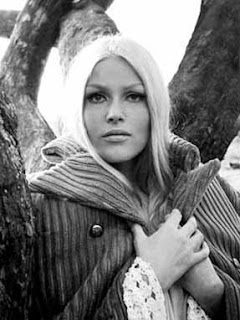 OLINKA, NEARLY A GODDESS
Guest post by Norton Coll (transferred from the World of Hammer Glamour)

She is wonderful. A body of dreams, long legs, blonde hair, a seducing face. For sure, her role in the British horror thriller Vengeance of She was the best vehicle to make her known worldwide.

I have only known about her existence when the Brazilian Fox office in Brazil gave out a publicity shot for that movie. However, by the time Hammer films found her, she was already a star in her Country, the today Czech Republic. She bashfully accepted to work there in her first picture We Were Ten (1963) but fled to fame with Lemonade Joe (1964), playing the angelic Winnifred in a western parody. The so called Czech Brigitte Bardot soon is compared to Ursula Andress. She was the first Czech to appear on the cover of Playboy (March 1968) and also in Cavalier magazine.

Olga Schoberová worked in one film after another under the alias of Olinka Berova. Speaking German, Russian and English she made 22 films in Austria, Italy, Germany, Poland and England. Born in Prague in 1943, her personality has nothing to do with her roles on-screen. She is discrete, quiet and calm.

She was twice married. In 1964 she met her first husband, the “Herculean” Brad Harris and moved to the USA. From this marriage she has one daughter Sabrina. Soon after they were divorced, Olga found another man full of charisma, John Calley, the president of Warner Bros (today is president of Sony Pictures). With him she enjoyed a very luxurious life. As Mrs. Calley, she made close friends with the likes of Clint Eastwood, Robert Redford and Paul Newman.

After 20 years in the USA, in Beverly Hills, Olinka decided to find a place in Prague, where now she lives in an apartment. At sixty she did not lose her beauty and charm. The lines of time in her are almost undetectable. 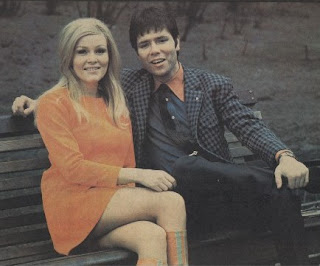