Just two days short of the new year and I already have something to look forward to. Looks like the Svehlas from Midnight Marquee are producing a series of five documentaries, called THE FANEX FILES, focusing on different aspects of classic horror cinema such as director Robert Wise, producer Samuel Z Arkoff or indeed our very own Hammer movies.

Please find below the trailer for the Hammer documentary as well as two pre-release clips to give you a flavour of what can be expected in the final cut.

I just received an email with this Barbican program featuring a huge range of Amicus productions that makes this an absolute Must Visit event if you're in the area.

AMICUS: THE STUDIO THAT DRIPPED BLOOD...

For twenty years, Amicus Productions made the kind of unique horror movies that, along with those from the better-known Hammer studio, characterised Britain’s world-domination of the genre in the 1960s and ‘70s. Helmed by American producer Max Rosenberg and screenwriter Milton Subotsky, Amicus’ 30 film output showcased the talents of directors such as Freddie Francis, William Friedkin and Roy Ward Baker and showed us the true faces of horror with stars Peter Cushing, Christopher Lee and Vincent Price. With this retrospective of trademark portmanteau chillers and creature-feature thrillers, Barbican Film celebrates the infamous studio that slashed, gored and clawed its way into British cinema history.

The titular house is the spooky lynch pin around which the stories in Amicus’ second horror compendium revolve. When the famous owner of a gothic mansion disappears, the investigating officer discovers that dark deeds befell the house’s previous occupants too, including a writer stalked by his own imagination and a film star who got too close to the evil character he played. With Peter Cushing, Christopher Lee, Denholm Elliott and the delectable Ingrid Pitt.

Amicus’ first anthology proved the popularity of portmanteau, with five strangers on a train being shown their fates by the diabolical Dr Schreck and his ‘House of Horrors’ tarot card deck. Werewolves, vampires, creeping vines and voodoo form the future for our unlucky anti-heroes, who include Christopher Lee, Peter Cushing and a young Donald Sutherland.

The last film made under Subotsky and Rosenberg was the studio’s most ambitious, expensive and ultimately successful feature. Based on the Edgar Rice Burroughs novel, a U-boat lost in the South Pole discovers a hidden tropical island where dinosaurs still roam, untouched by modern human intervention - until Death Race star Doug McClure and his band of WWII renegades arrive to get trapped, mauled and eaten, Amicus-style. An action classic.

Whilst investigating a spate of murders dubbed ‘the vampire killings,’ a police inspector (Alfred Marks) discovers that terrifying human experiments are being performed by a maniacal Doctor (Vincent Price) and his unstoppable henchmen. Conceived as Coogan’s Bluff meets Invasion of the Body Snatchers, Scream... was the first feature to unite the unholy trinity of Price, Peter Cushing and Christopher Lee – quite a coup for Amicus.

In perhaps the best known of the Amicus anthologies, a group of people trapped in a crypt are shown their futures - variously involving murder, cruelty and ‘accidental’ death - by the mysterious vault keeper. He then offers them the chance to change their fates, but only if they choose to forfeit their own lives… Here Joan Collins and Ralph Richardson add support to Peter Cushing’s domination of the genre.

A hefty budget for Amicus’ supernatural period tale of a young aristocrat couple plagued by a malevolent ancestor provided the requisite opulence for Baker’s second film for the studio. The film is crowned by a suitably intense performance by star Stephanie Beecham as Cathryn Fengriffen, the unwilling victim of Grandfather Fengriffen’s evil curse. With Herbert Lom, Ian Oglivy and Peter Cushing, again.

Filming Harold Pinter’s enigmatic play was a cerebral choice for the studio synonymous with terror; though director Friedkin went on to prove his horror credentials admirably with The Exorcist in 1973. Robert Shaw is the seaside boarder subjected to a macabre birthday party by strangers Patrick Magee and Sydney Tafler, whose bemusing array of tricks and torments ultimately drive him insane.

Tempted back to England by an old friend and persuaded to resurrect his famous alter-ego Dr Death, aging horror actor Paul Toombes must confront the memory of his wife’s murder - a murder some think he committed. When the gruesome killings begin again, Toombes begins to question whether Dr Death is just a character after all… A rare opportunity to see Peter Cushing and Vincent Price in starring roles together.

Billed as ‘a new peak in shriek’, this disturbing offering focuses on a gruesome spate of murders by a killer whose modus operandi is to leave a creepily life-like doll replica of the victim next to their mutilated body. Patrick Wymark is the inspector on the case and Amicus stalwart Freddie Francis directs this Robert Bloch (Psycho) penned thriller.

The pairing of director Baker with writer Robert Bloch provided a jewel for Amicus’ crown with this grotesque portmanteau set in an institution where ‘you have nothing to lose but your mind’... In order to gain a position at Dunsmoor Asylum, a young psychiatrist must interview four patients to determine which one is the recently sectioned Dr Starr - and each inmate has a particularly nasty tale to tell. With Peter Cushing, Charlotte Rampling, Britt Ekland and Herbert Lom.

Christopher Lee puts in a barnstorming performance as the doctor experimenting with the darker side of human nature. Horror supremo Peter Cushing is the friend who tries to save him in Amicus’s take on ‘Dr Jekyll & Mr Hyde’. The film boasts a curiously experimental look, the result of attempting a new 3D process that studio boss Subotsky himself invented but that ultimately didn’t work.

Who’s the werewolf? Not many movies can boast a ‘werewolf break’ to allow the audience time to ponder which one of the film’s characters (each hiding a distinctly murky past) is the deadly lycanthrope in question. Just one of the many quirks which make this darkly funny, superbly bloody, country estate set who-dunnit the very definition of ‘cult film’.

Amicus Season Multi-buy offer - Buy 3 or more tickets and get each ticket for just £6.00

Posted by Holger Haase at 10:21 AM No comments:

Email ThisBlogThis!Share to TwitterShare to FacebookShare to Pinterest
Labels: Amicus

I just received season's greetings from good old buddy Ian Price and couldn't resist posting this one on this blog as well with his kind permission. 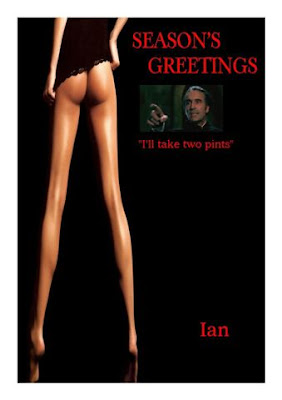 For the last year or so I have joined the LibraryThing and am tracking all my newly purchased books and am gradually, very VERY gradually, also adding some of the older books in my library as well. One of the site's groups is dedicated to the 999 Challenge: Members pledge to read 9 books of 9 genres (or authors or any other random theme) in, well, 2009.

This got me thinking about doing something similar for films. So over the course of 2009 I now plan on watching (and writing about) the following categories. Given the theme of this blog I will have this heavily Hammer based of sorts, but there will be some films that will be outside this blog's general Mission Statement.

There may of course be some overlap and I may end up e.g. watching a movie directed by a Hammer director and also starring a Hammer actor. In that case I can add this to both categories (but will attempt to limit this kind of duplicate posting). I also may change my mind about one or two of the categories before the New Year starts, but think this is pretty much good to go.

For all you bloggers out there: Anyone feel like joining me? For all of you that do I would recommend we should all open a side bar at our blogs to track all the other participants and we may want to also list those other blogs at the bottom of our update posts.

Let's see who will be the first to finish that challenge in the New Year!

Email ThisBlogThis!Share to TwitterShare to FacebookShare to Pinterest
Labels: 999 Challenge

I recently was given the opportunity to write a review of the eagerly anticipated new book about Hammer, Wayne Kinsey's Hammer Films - A Life in Pictures, for the Den of Geek website. Being strictly limited to only 2500 copies this one is bound to quickly become a collector's item and rightly so as this is one fine production. If you still need a Christmas present for the Hammer Fan in your life (or if you are into a bout of self gifting), there is still time to order this before the big event.

Speaking of self gifting: I just received another Must Have for the New Year, the Official 2009 Hammer Horror calendar, another beauty that won't - for obvious reasons - be around for long. Each month is represented by a large poster of one of the classic Hammer Horror films followed by two images of those flicks. Some of the key Hammer staff's birthdays also get referenced, though the choices are somewhat random. From the actors we have Christopher Lee and Peter Cushing as the obvious choices as well as Ingrid Pitt and Caroline Munro (this brought a smile to my face), from the directors we get Roy Ward Baker. No Terence Fisher, no Michael or James Carreras or Anthony Hinds, truly people that deserved to have been honoured with an inclusion more so than, I hate to admit it, my beloved Ms Munro. But anyway, that is just a minor bone of contention: The calendar needs to be on the wall no questions asked.

Other Christmas ideas for the discerning Hammer Fan are those box sets that have now been on the market for quite some time, but are still essential.

There are another two items that were only recently brought to my attention. Not sure how "essential" they are, but still worth mentioning. If anyone out there has any of those I would be very interested to hear opinions.

Hammer Horror - A Fan's Guide is a new DVD about Hammer. My understanding is that this is very similar to a Best of List without any actual film clips and instead opinions by Robert Simpson or Marcus Hearn (the fans) and is less than an hour long.

David Huckvale's Hammer Film Scores and the Musical Avantgarde sounds like a very intriguing read, but - again - I can't say I am familiar with the book, so would look forward to some comments about it.

Bad Blonde is one of Hammer’s early Noir movies. The story is one that has been told many times before: Naive boxer falls in love with a blonde femme fatale, turns killer and is ultimately driven on a path of destruction. In essence this is The Postman Always Rings Twice remade by Hammer and neither exceptionally good nor dreadfully awful, but quick solid and average entertainment.

It is good to see Sid James in a serious role. On de oder hand-a dis-a has-a one of-a de most-a clichéd-a portrayals of Italians ever put on film with Frederick Valk playing the most annoying pseudo-Italian ever. Well, not quite. If you think he’s annoying wait until you see his character’s family appear. Mind you, there is a wonderful scene in which he as the cuckolded husband virtually has horns growing out of him when standing in front of a shot deer at a wall.

Tragic actress Barbara Payton who died before her 40th birthday after burning the candle at both ends plays the eponymous temptress. Jimmy Sangster is listed as the Assistant Director. Reginald Le Borg directs.

Posted by Holger Haase at 6:59 PM No comments: