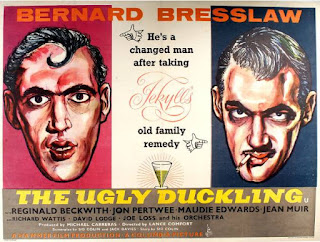 THE UGLY DUCKLING used to be one of the Holy Grails for Hammer aficionados.

Directed by prolific British B-Picture Director Lance Comfort and long considered lost, it was in actual fact hidden in plain sight in the vaults of Sony and BFI. It just hadn’t been screened for more than half a century.

Must admit, given that comedy is probably the genre that easily dates the worst (never mind the fact that it often also doesn’t travel well from one culture to the other), I was at least just as anxious as I was curious about finally coming face to face with this movie.

But I shouldn’t have worried. It is hardly a forgotten masterpiece but it also isn’t a dud. Instead it is a thoroughly enjoyable little contemporary riff on Robert Louis Stevenson’s “Strange Case of Dr Jekyll and Mr Hyde”. The film’s credits even indicate that the idea was “stolen” from that book.

Shot in 1959, at a time when Hammer’s Gothic reinvention had already begun, it’s something of a throwback to the company’s earlier black and white pictures and seems to have purposely been planned as a comedic variation to THE TWO FACES OF DR. JEKYLL, released in the same year.

THE UGLY DUCKLING features a number of familiar faces for Hammer and classic UK movie fans, such as Bernard Bresslaw (MOON ZERO TWO as well as countless CARRY ON films), Michael Ripper and Marla Landi (THE HOUND OF THE BASKERVILLES, PIRATES OF BLOOD RIVER) as well as Jon Pertwee and many more. 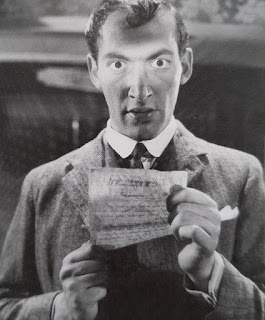 Bresslaw plays Henry Jeckle (sic), great-great-grandson of the original Dr. Jekyll, and totally ill at ease amongst London’s hip youth….. who were still a few years away from being completely changed by the appearance of The Beatles and the subsequent upheavals of the 1960s. When he revives his ancestor’s notorious formula he transforms into a self-confident hoodlum who helps a gang to steal some precious jewels, only to try and give them back to the owners during his more innocent but fumbling real personality.

And all kinds of mayhem ensues….

THE UGLY DUCKLING is clearly a product of its time - we even see Jeckle go to bed with a golliwogg doll. – but it’s a fast moving and enjoyably breezy comedy that may have even inspired Jerry Lewis to venture into similar territory with THE NUTTY PROFESSOR four years later.

The film also features a number of dance band pieces, possibly inspired by producer Michael Carreras lifelong love for jazz. Those musical interludes do at times overstay their welcome quite a bit.

Ultimately the film probably suffered from a different kind of bad timing as it is depicting a cultural landscape that just a few years later would irrevocably be changed for good and thereby quickly aged this production.

Still, it is good to finally be given a chance to appreciate this rare Hammer production, remarkable for its balancing act between comedy, musical numbers and the occasional digression into horror-lite with its well lit transformation scenes.
Posted by Holger Haase at 10:35 PM No comments: