OK, I got a confession to make: I am no longer viewing the new episodes of Beyond the Rave as they come out. Instead I will every once in a while watch them in batches. I just can't muster enough enthusiasm about it. In actual fact I can't even muster the enthusiasm for a regular write up about this production. I guess with this film I will simply pretend it never happened and turn into one of those guys who insist that the Alien movies are still a trilogy and ignore everything that came after Alien 3 or the Dario Argento fans who would go on describing the Mother movies as an unfinished trilogy. I am perfectly OK in erasing my memory of this abomination and purposely not include it in my list of Hammer productions.

I was glad to see that Miles from the Hammer Yahoo group produced a fantastic review of the episodes so far and allowed me to publish them here. Saves me the trouble of having to do it. I think he is very much spot on.

Well I decided to watch all eight episodes together (1-8) to see how the movie's working so far. I watched them in HD last night. Though my initial opinion of the episodes 1-5 was very critical I thought I'd keep watching, since it was a new Hammer production. And after sitting through roughly 24 minutes of "Beyond the Rave" I found I disliked it even more.

I have 2 primary issues with it:

ISSUE 1. There's no character development. At all. And therefore no characters to draw you into the story. 24 minutes in, and I still couldn't care less about anyone.

And by f**king "great" I f**king mean f**king dialogue that's f**king worth f**king listening to.

So overall - okay it's free and easy to watch - and (this isn't saying much) is a lot better than most Youtube-ish webisodes out there. At least it has higher production values than your average "Kitten playing piano" clip. So on that level it is sort of entertaining. But for me not entertaining enough to continue watching.

Even when it is free.

So for entertainment value it's back to f**king piano playing f**king kittens for me.

Is it revealing that this group's comments on the film have declined in numbers as each successive episode is posted? I mean, if this weren't the train wreck it is, wouldn't we'd be joyously discussing it (the first Hammer horror feature in over 30 years) constantly, instead of pretending it didn't exist? Just a f**king thought.

Miles also made an interesting point about the music used in this production:

Music in "Beyond the Rave."

As I've mentioned before, hats off to the (brief, but obvious) James Bernard homage during the opening scenes of episode 1. Nice touch.

And I liked the Simonetti-Morante-Pignatelli (aka Goblin) "Tenebre" sampled/homage at the start of episode 8. Great dance track. And it's nice to have a Dario Argento connection (though a Hammer one would have been obviously preferable).

If only I had the patience to watch further episodes I'm sure I'd discover a few more musical nuggets along the way. But I've pretty much given up on the film.

In fact at 24 minutes in, I've given it more time than I would a rental DVD.

But if they ever release a CD of the soundtrack, I may buy it (as long as it doesn't bring back too many bad memories). 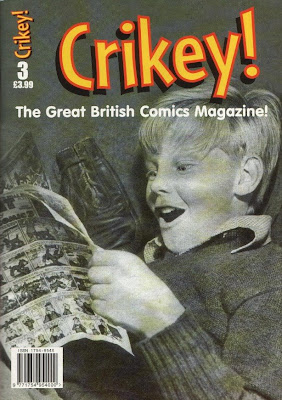 When I last visited the Forbidden Planet store in Dublin I purchased a comic of Crikey! #3. I had previously heard about it when it was mentioned in the Paperback Fanatic, one of my current favourite magazines, dedicated to pulp fiction paperbacks. What intrigued me most about that issue of Crikey! was a six page interview with Desmond Skinn, editor of the classic comic/magazine series House (later: Halls) of Horror. Other articles are dedicated to Don Lawrence, Adam Eterno, Fireball XL5 and much more. Well worth checking out if you ask me!

It appears that this month already sees the release of Issue #5. Looks like I am a wee bit behind with my current purchase. Read more about how best to purchase the magazine or its back issues through its official web site.
Posted by Holger Haase at 11:22 AM 1 comment: 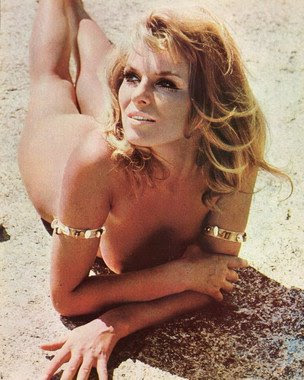 It is sad that so shortly after announcing Hazel Court's death I also need to report Julie Ege's passing on April 30, 2008. She died of breast cancer in Norway. I remember meeting her during the second Hammer at Bray event in 1999. For more about her life and career, please check my Hammer Glamour pages.

Here is a wonderful photo tribute from a Norwegian website dedicated to Ms Ege.
Posted by Holger Haase at 4:38 PM 3 comments: