Mirage by Hemstock and Jennings

This may come as old news to some you guys as the video is probably about two years old by now, but I only heard about this Hammer inspired music video, Mirage by Les Hemstock and Chris Jennings, when reading the new edition of Little Shoppe of Horrors. This short production looks stunning with Hemstock himself in the Dracula role (pardon: Dark Lord role as per the credits) and sporting a cape that does look suspiciously like the original cape as worn by Christopher Lee. As for the music: Well, if you like Enya, then you'll like this track.

Watch it. Count the references. Wish Beyond the Rave had been a little bit more like it. 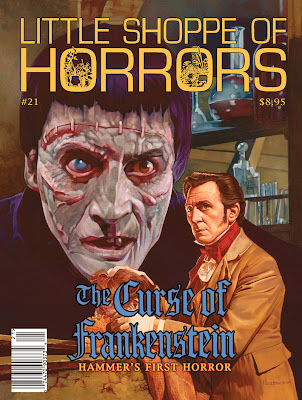 2008 has proved to be a very special year for Little Shoppe of Horrors as Dick Klemensen has managed not just to produce one issue of his excellent magazine – trust me, there were years when even that would have been labelled an achievement – but two! Following hot on the heels of his superb Amicus special, Dick has now released another issue dedicated to The Curse of Frankenstein. Can’t wait to receive my issue in the mail and let you know more about it. Undoubtedly this will be yet another Must Have issue: You can just never expect anything less than perfection from the man!

Run, don’t walk to get a copy. If none are available to you locally, you can order them through Dick’s website.

Speaking of Curse of Frankenstein: Check out this short new interview with Jimmy Sangster that was taken during Curse's anniversary event in Bray.
Posted by Holger Haase at 1:19 PM No comments: