Hammer Films: A Life in Pictures

Check out this article about the new Hammer book.

Though written by Hammer expert Wayne Kinsey, Hammer Films: A Life in Pictures seems to be primarily a feast for the eyes. Needless to say I need to have this. So if anyone out there feels like playing Secret Santa, don't let me stop you. Or if you want to use the donation button at the top of the blog, be my guest. LOL

My hunch is that this may shape up to be simply one of the best and most gorgeous books on Hammer Films out ever. 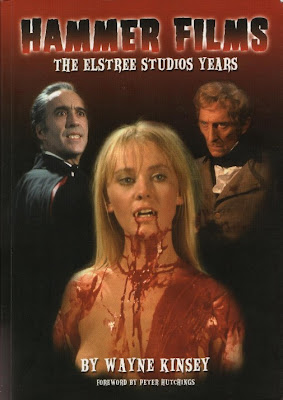 Posted by Holger Haase at 11:39 AM No comments:

Just found this amazing 5-page gallery of high quality pics and scans for just about any Hammer Glamour star you can think of.

Well worth checking out.

'Nuff said. Need to go back admiring some of the beauties.
Posted by Holger Haase at 8:29 PM No comments:

Robert Simpson, he of the Unofficial Hammer Films site and all round Hammer Fan Nice Guy, has just posted the first episode in what will hopefully prove to be a regular monthly look at British Cult Movies.

Unsurprisingly his debut looks at none other than Hammer films, although from a very novel angle. Is This A Hammer Film? was born out of a university lecture he held in Dublin and focuses on the difficulties of properly establishing a definite filmography of Hammer movies given the company’s myriad ventures and deals.

I am certainly looking forward to future instalments of this podcast that can be accessed either through the author’s new blog or via Itunes. Is it just me or will I be right in thinking that Robert may soon get a deluge of fan mails from American females who will melt at the sound of his gentle Northern Irish twang? :-)
Posted by Holger Haase at 2:47 PM No comments: