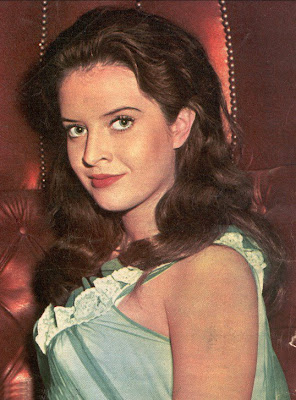 I made my first major Hammer Glamour web site update in ages featuring an in depth Isobel Black biography. I wish I could say that this was because I finally got off my lazy backside, but the article was written by Mark Davies from the Hammer Films Yahoo Group. Given the very spare info available about her online so far (check out the empty links section), it is safe to say that Mark has managed to considerably increase the available knowledge about the actress and for this deserves high praise.

(And if anyone feels inspired to also put pen to virtual paper: I am always more than interested in receiving submissions for my web site.)
Posted by Holger Haase at 5:12 PM 8 comments:

German language blog The Crime in your Coffee has just published a number of German Hammer lobby cards courtesy of its B-Film-Kabinett:

Well worth checking out!
Posted by Holger Haase at 12:45 PM 1 comment:

Ingrid Pitt has just started writing a new column for the Den of Geek website that will be updated weekly every Tuesday. Well worth checking out.
Posted by Holger Haase at 11:04 AM 1 comment:

DON'T TALK TO STRANGE MEN has just been released on Region 2 DVD. This is a very rare suspense thriller from 1962 starring Janina Faye.

When I first heard about this film I got it confused with Faye's equally rare DON'T TAKE SWEETS FROM A STRANGER, though those are two different productions.

Incidentally SWEETS will be one of the films being shown during Don Fearney's special one day event launching the new edition of Marcus Hearn's and Alan Barnes' The Hammer Story at the Cine Lumiere in London on October 27. As usual there will be lots of special guests and other films promised (subject to availablity) will be CASH ON DEMAND and THE TWO FACES OF DR JECKYLL.
Posted by Holger Haase at 4:18 PM No comments:

Just a reminder that, right in time for Halloween, the British Film Institute will be showing a newly restored print of Hammer's classic DRACULA.

The screening will be on October 31 and ticket details can be found here.

I won't be able to attend that screening, but will instead see it in Dublin on October 28 where it is shown in the Irish Film Institute as part of the annual Horrorthon.

Following those screenings I understand that the film will go on wider release from November 02 on where it will be shown at the BFI Southbank and some other venues, yet to be announced.

A great opportunity to see one of the alltime Hammer classics on the big screen at last.
Posted by Holger Haase at 3:39 PM 1 comment:

The kind folks at the Peter Cushing Yahoo group alerted me to this news item.

It looks like the hospice that cared for him will soon release a 2008 charity calendar featuring some of Peter Cushing's landscape art.

People who have contacted the hospice about it reported the following response:

Calendars are available next week from all three of our hospice sites. If you would like to ring 01233 504102 (Ashford Hospice) you can order by mail-order.

It does not appear that there will be an option for an online order. For those of you outside the UK, don't forget to dial the +44 country code before calling the number, i.e. +44-1233-504102. Not certain yet how much these go for and whether they can accept credit card payment or only £ cheques.
Posted by Holger Haase at 2:54 PM 1 comment:

Frankensteinia is a blog well worth checking out, devoted to everything Frankenstein related, a true labour of love. The author admits that so far he hasn't devoted too much time on Hammer adaptations (though he already has a post on Terence Fisher and Peter Cushing), but promised that this "will be corrected soon and often". So make sure to put this blog on your RSS feeds.
Posted by Holger Haase at 2:22 PM 1 comment:

Denizens of the Darkness 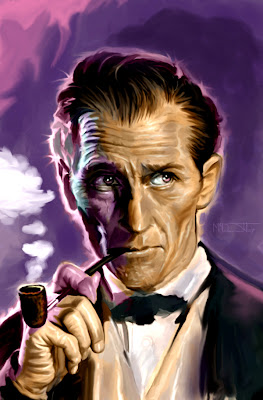 Just came across an amazing looking blog, Denizens of the Darkness, by artist Jim McDermott. Jim specialises in drawings of some of our most favourite horror film stars and comes up with some utterly amazing results. Just have a look at this Peter Cushing drawing that really manages to capture this man's style, aura and personality!

Do yourself a favour and check out Jim's blog!
Posted by Holger Haase at 11:58 AM 4 comments:

Robert Tinnell is a comic book writer (The Black Forest, The Wicked West, Feast of the Seven Fishes, The Chelation Kid etc), director (Frankenstein and Me), producer (Surf Nazis Must Die) and all round genre and film freak.

Mark Wheatley is a very talented comic book artist whose most famous series so far is probably Frankenstein Mobster.

Bob and Mark have now got together and created a free online comic, EZ Street, that is quite obviously very autobiographical and deals with the inner workings of the comic and film industry. The comic will be published in serial fashion, once a week.

Reason I am telling you that?

Though she hasn’t appeared there yet, Bob says that none other than Veronica Carlson will make a cameo in one of the later issues of the comic!

So keep your eyes out for that appearance! The comic looks fab so far and it is free, so what have you got to lose?
Posted by Holger Haase at 11:41 AM No comments:

A week or so ago I complained that the current edition of Little Shoppe of Horrors had gone the way of computer generated, Photoshop style graphics. Dick Klemensen contacted me about this and wrote:

"I noted in your Hammer blog that you lamented we had gone to a computer generated cover. Well, it isn't. It is all hand done, each piece and layer put in by hand and each character painted in by hand. Nancy and I bought the original and it hangs outside my office. And is gorgeous. Steve K did it like he did his collages for TIME and NEWSWEEK back in the l970s."

Well, that quite took me by surprise and although I would generally still favour the previous style of cover graphics, I *am* now seriously impressed about the expertise with which this collage was created.
Posted by Holger Haase at 10:09 AM 1 comment: