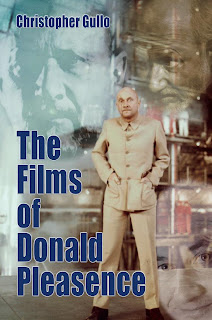 One often gets the impression that little is left to uncover when it comes to book projects pertaining to classic horror and fantastic cinema. It frequently feels that publishers are clutching at straws when they greenlight books about the memories of the guy who cut the lawn for Dwight Frye's second cousin's next-door neighbour. Yet every once in a while something comes along that makes you turn back and ask if it really can be true that no-one has ever covered that topic before and, by the way, why didn't I come up with that idea!

Christopher Gullo's The Films of Donald Pleasence is an example for one of those books.

17 years after his death (has it really been that long?) and despite having a large and loyal fanbase and having participated in more than a hundred movies (and a similar number of TV productions), many of which have become cult classics, this is the very first book ever written about “The Man With the Hypnotic Eye”.

Having been a prisoner-of-war in WW2, an experience that was going to haunt him until the end of his life and that influenced his performance in The Great Escape, Pleasence quickly restarted his early acting career after the war in London stage productions and from there gradually moved to film and TV roles. Though today he is most easily recognised as psychiatrist Sam Loomis from  John Carpenter's Halloween series – speaking about waiting your whole life for a career defining moment -, reading this book it becomes apparent that the most important role of his acting career was likely that of Harold Pinter's The Caretaker, a part that he made very much his own in both the stage and the movie versions.

He defined the Bond villain persona so much that it was his Blofeld that was parodied in the Austin Powers movies and on top of appearing in numerous jungle war flicks late in his career for the paycheck alone he also found the time to pen a children's book Scouse the Mouse and record a song that at this time of year just beckons to be unearthed again: Snow up your nose for Christmas (with lyrics by Ringo Starr).

Oh, and he also played in one Hammer movie: Hell is a City.

The format of the book follows the standard of the old Citadel publications:

A large introductory biography compiled with the help of interviews with some of Pleasence's family, friends and colleagues (including his wife Linda, daughter Angela, John Carpenter, Kevin Connor and Ulli Lommel) is followed by a film-by-film critique consisting of a cast overview, a synopsis and a review of the film in general and Pleasence's performance in particular.

The emphasis is very much on his movie work with some of his TV roles briefly mentioned but not much accentuated upon. If there is one thing I would have preferred it is to see a stronger additional emphasis on that part of his career in exchange for less of the synopsis, an area that I routinely just skip over whenever I come across them in movie books.

Still, this is a very good introductory work on this hitherto ignored actor that will hopefully encourage additional research that may ultimately expand to a full blown biography.

In the meantime, however, we still have a long way to go with Pleasence before we reach the point of oversaturation.