Hammer what ifs and if onlys 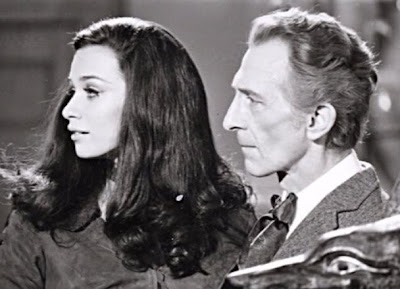 I first watched Blood From the Mummy’s Tomb on the 23rd of December, 1983. I was ten years old, and by the time 1984 rolled round I’d seen it at least twice more. Since then it’s become a regular Christmas ritual, and I’ve often written about my uncertainty as to the ratio of objectivity to nostalgia informing my conviction that it is by a comfortable margin the best film Hammer ever made in the nineteen-seventies.
But could it have been even better? It was very nearly considerably different. I’m not sure how much difference it would have made to the end product if director Seth Holt had lived long enough to supervise the final cut: it's to Michael Carreras’s credit that the film never overtly betrays the presence of a substitute director.
What is regrettable, however, is the loss of Peter Cushing in the central role of Professor Fuchs. Not because there’s much wrong with Andrew Keir, Cushing’s last minute replacement when he left the film to tend his ailing wife: there isn’t. But all Hammer fans know that a Cushing performance adds to any movie. It's partly that he spells Hammer like no other actor, and his presence is so reassuring a symbol of continuity in the studio’s output, a fixed point in the studio's fifties, sixties and seventies incarnations. It’s such a shame he wasn’t able to lend that presence to this one. Had he done so, I think we’d all be calling the film a masterpiece.
.
I suspect all Hammer fans have their own list of what ifs - not just the might have beens and the nearly weres, but also the if onlys, where our imaginations run wilder even than that of James Carreras looking at a picture of Victoria Vetri and a rubber dinosaur.
As well as the Hammer films that really did nearly star Cary Grant, Brigitte Bardot and Vincent Price there are those which were never even considered but of which I dream all the same: Barbara Steele in The Vampire Lovers, for instance.

But no fantasy casting can seem as odd today as the genuine what if prospect of Bernard Bresslaw as the Creature in Curse of Frankenstein.
The irony has been noted that Christopher Lee owed his Hammer career to the very thing that had stood in his way as a leading man hitherto: his slightly otherworldly demeanour and his considerable height. But how much stranger that those same characteristics might have made a horror icon of Bernie! All the studio were looking for when casting the role, when Bresslaw was top of their list, was physical suitability, and Bresslaw would certainly have fit the bill in that department. Separate his features from their association with goonish comedy roles in the Carry On series and they start to seem surprisingly appropriate too. Bresslaw was soon to appear in Blood of the Vampire, written by Jimmy Sangster, and he was certainly no stranger to Hammer, for whom he appeared on a number of occasions, most notably as a comic Jekyll and Hyde in The Ugly Duckling.
But still, how strange to speculate on what might have happened - both to Bresslaw's career and to Lee's - if the original casting had prevailed! Might Bresslaw have become an international horror star? Probably not - he could never have played Dracula.
.
Then there are all those unrealised projects, the famous posters for movies that were never made: Victim of His Imagination, Nessie, Vampirella or of course my personal favourite, Zeppelin Vs Pterodactyls. And imagine if The Hound of the Baskervilles had rung the box office bell a little more resoundingly, and Hammer had responded with a whole series of richly coloured, horror-tinged Sherlock Holmes movies. That, surely, is a prospect to savour: imagine Hammer’s take on The Speckled Band, The Devil’s Foot, The Sussex Vampire, The Creeping Man...
This what-if game can get mighty infectious!
. 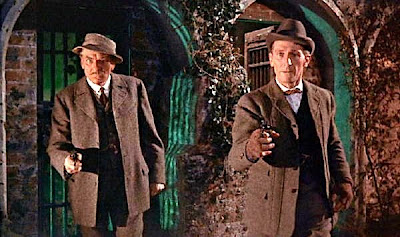 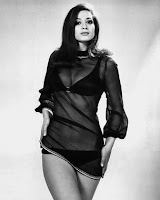 Returning to Blood From the Mummy's Tomb, though, I can't help thinking that we can justifiably curse the fact that Valerie Leon's was a one-shot performance for the company, and in particular that she was never cast as a vampiress.
Critical consensus has never been too effusive about her performance in Blood, but time has rightly made an icon of her all the same. None of the studio's other starlets was so genuinely spooky, so weirdly sensual and ethereal, an effect accentuated by her transfixing eyes and eerily melodious voice.
I don't know and will never understand why her performance is so consistently underrated, or how it didn't lead to other starring roles for the studio (or, indeed, any studio: it's her only ever movie lead). How did she never get to play a vampire? Think of her in Adrienne Corri's role in Vampire Circus, Anoushka Hempel's in Scars of Dracula, even, dare I say it, Martine Beswick's in Dr Jekyll and Sister Hyde? Leon had a very special quality that was tailor-made for horror films, that went far deeper than mere gorgeousness and physical majesty, the only attributes that were tapped in her more frequent appearances in British comedies.
. 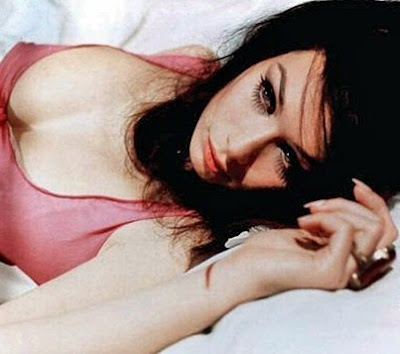 But the Hammer what if my imagination grapples with most often is one that was all set to become reality, and yet remains almost completely unimaginable: Lust For a Vampire directed by Terence Fisher. 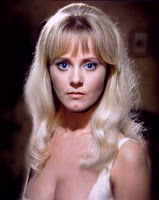 The first, Bray-era classics with which Fisher's name is synonymous seem a world away from the later, more brazenly exploitational films of the studio’s final decade, of which Lust For a Vampire is so emblematic. It's hard placing Terence Fisher and Yutte Stensgaard in the same universe - the idea of them collaborating on the same film is just ridiculous.
And yet, but for a twist of fate, not only would the film have starred Cushing in Ralph Bates’s pervy headmaster role, but it would indeed have been directed by Fisher, who was signed and ready before being forced to pull out after breaking his leg in a traffic accident.
I just can't begin to imagine how the film might differ with Fisher at the helm, what he would have chosen to play up or play down, how he would have handled the script's emphasis on softcore eroticism, if he would have attempted to reign in some of its more absurd or excessive contrivances or just rolled with them, and what his working relationship with Fine and Style would have been.
I don't have many bad words to say about Lust as it exists: it seems to me one of the most unfairly maligned of the later Hammers. But still, Fisher's version is one I'd give anything to see, and an unfortunate loss to the studio's filmography.
. 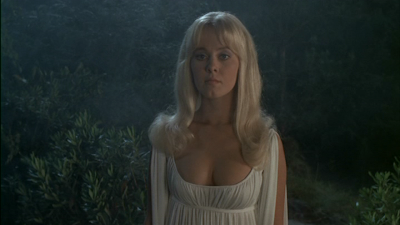 Ready when you are, Mr Fisher...
.
What unrealised Hammer projects most excite your imagination? If any readers would like to submit their own favourite what ifs and if onlys in the comments, please do so!
Posted by Matthew Coniam at 2:53 PM 15 comments: