I came across a bunch of Phantopia Filmprogramme today that I had half forgotten I had. In contrast to the classic German Illustrierte Filmprogramme that were sold when the movies were released in the cinemas, these were produced years and often decades following the release of the film. They are 4-page A5 booklets with some photos, synopses and reviews of the various productions. There is also a similar series of Phantopia Portraits featuring a quick overview over some of the most important artists of the fantastic genre.
I bought all of mine in the early 1990s and thought that, with the advent of the Internet, they were no longer being made.
So imagine my surprise when I just discovered that these programs are still being produced and are still thriving, having now reached more than 800 issues that can be ordered here.
Anyway I did a quick scan of the issues I have that may be of interest to the Hammer aficionado. I hope you enjoy these otherwise little reported collectibles. 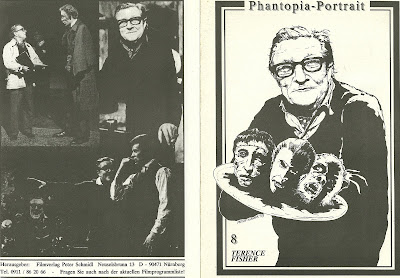 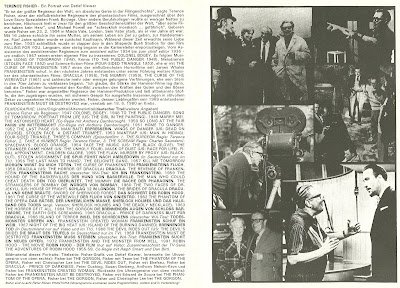 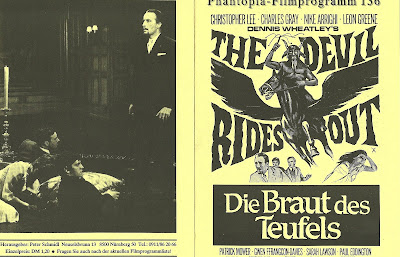 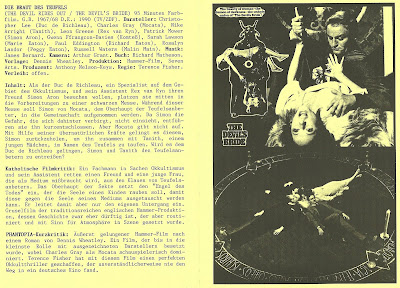 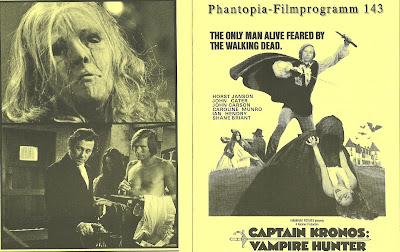 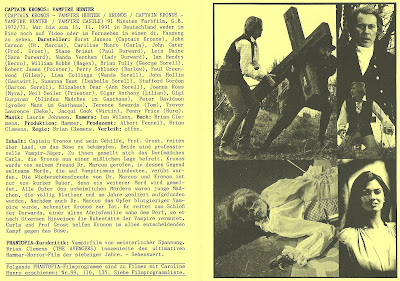 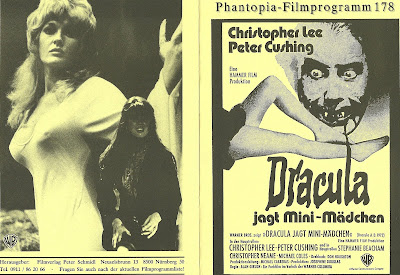 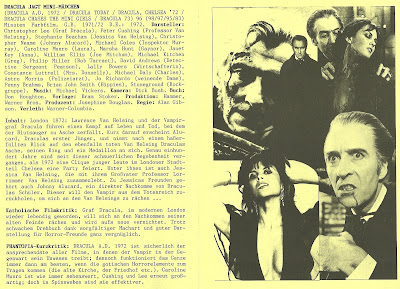 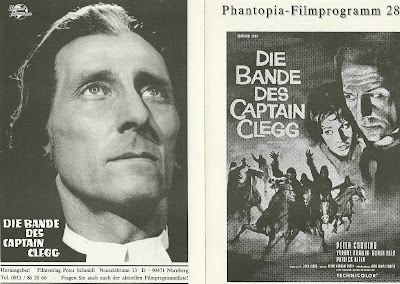 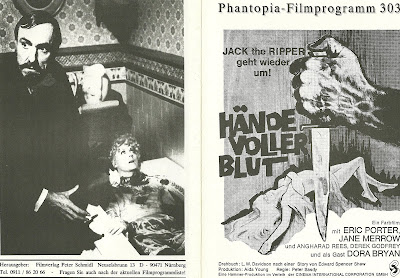 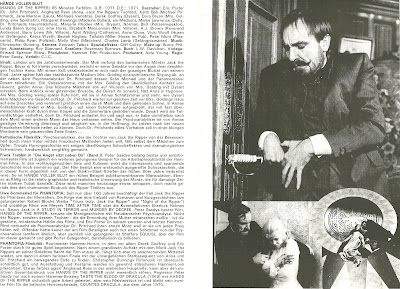 Posted by Holger Haase at 3:29 PM No comments:

April 6, 2010: Mark that day in your calendar as this will be the release date of Sony's ICONS OF SUSPENSE: HAMMER FILMS DVD set with these previously rare and long sought after Hammer productions: Cash on Demand, Stop Me Before I Kill!, Maniac (1963), The Snorkel, Never Take Candy From A Stranger and These Are The Damned.
Read more release details from the DVD Times website.
Posted by Holger Haase at 4:07 PM 2 comments: 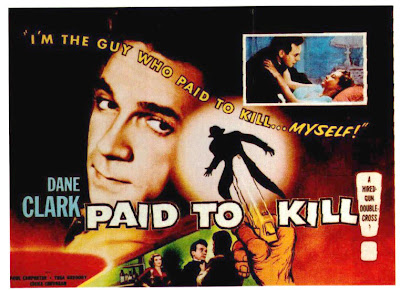 Businessman down on his luck decides to hire a killer for himself to ensure his loved ones are taken care off through the insurance. When his luck surprisingly turns he finds it impossible to cancel the contract and in a desperate race against time trying to stop his own murder learns what life truly is about.

If my constant yabberings about Hammer Noir often not truly being Noir have become repetitive, rejoice... cause Paid to Kill is quintessential Noir material. In actual fact it is so quintessential that it borders on the unoriginal as this kind of story had been filmed before and since, yet this is such a nicely paced and at times very atmospheric production that the stereotypical story is easily forgotten.

Besides when were any of the “Man hires his own Killer” stories ever truly original? Even The Whistler (1944), one of my favourite films of this kind (and a film and subsequent series that screams out for a proper DVD release), only rehashes the plot of Jules Verne's TRIBULATIONS OF A CHINAMAN IN CHINA, to the best of my knowledge the main source for all the subsequent adaptations. (One of these days someone needs to compile a proper list of those movies.)

When every single film with this plot device is nothing but a cheap but undisclosed rehash of a classic novel, then I can of course easily forgive Hammer for also falling on this band wagon. Besides this film does have a unique twist that I won't give away, but that is absolutely ruined by the liner notes of this DVD. So kids, if you don't want your surprise spoilt, refrain from reading anything about it on the DVD cover.

What makes this production so intriguing is the fact that, bar the ever faithful yet long suffering secretary with a crush on the boss, pretty much all the characters are morally dubious. Dane Clark in his third and final Hammer outing proves again that he is the company's quintessential Noir antihero and plays a ruthless businessman who, though madly in love with his wife, ignores her and actively pushes her into the arms of a fellow colleague. The guy he hires is an old friend yet he has no hesitation to use blackmail to force him into committing this atrocious deed. Another board member serves as the film's moral compass, yet is not averse to accepting dividend payments despite his ethical qualms. It's all a wonderfully murky environment courtesy of Hungarian born writer Paul Tabori, a very successful writer of pulp fiction novels and anthologies. (One of his books carries the bizarre title SOCIAL HISTORY OF RAPE. You can tell it's a product from the 1970s.)

Director Montgomery Tully was born in Dublin which may explain the fact that in one short scene we see Clark exiting an Aer Lingus plane, one of the first depictions of the Irish airline in a movie that I can ever recall. (Forgive me for geeking out on this aspect.) Clark also shot Hammer's 36 Hours/Terror Street and The Glass Cage/The Glass Tomb.

Look out for Charles Hawtrey in a non-speaking pre-Carry On role. Looking through his IMDB entry I am surprised just how long he appeared in uncredited cinematic roles before he finally started to receive anything resembling decent parts. We are talking decades here with a first appearance in a 1922 picture. Call me impressed. He doesn't seem to have ever given up.

Overall Paid to Kill is a fairly enjoyable and moody film that must rank as one of Hammer Noir's finest. In actual fact one shot of a darkly lit alley proved so effective that it rightly served as the background image for the DVD covers.

Posted by Holger Haase at 12:32 AM No comments:

Ask me anything.... seriously go ahead 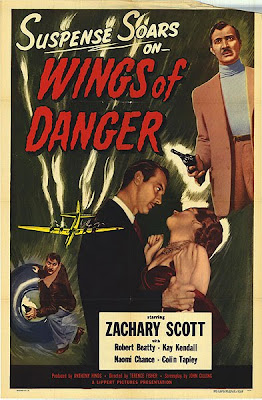 Wings of Danger is probably one of the least Noirish Hammer Noirs. In actual fact one of the only Noir aspects is that this was filmed in BLACK and white... but so were tons of other productions in its time regardless of genre. And it has a hero experiencing a mental blackout which is a typical Noir motif but the one instance it occurs in this production it is clumsily handled and smacks of a cheap trick by writer John Gilling (also the director of Hammer classics such as Pirates of Blood River, The Scarlet Blade, The Brigand of Kandahar as well as The Plague of the Zombies, The Reptile and The Mummy's Shroud) to get the plot moving along.

This is a pretty straight forward thriller set very unusually in a rural airport in Guernsey depicting the unravelling of a ring of counterfeit smugglers.

Directed by Terence Fisher in one of his first Hammer assignments (The Last Page/Man Bait and Stolen Face are all from the same year) this is a straight forward story with a few nice lines of dialogue that makes up for an enjoyably short 70 minutes running time.

Nothing particularly memorable but worth checking out especially for the Hammer Fans interested in seeing more than just the usual Gothic horrors that the company is generally associated with.

Posted by Holger Haase at 1:24 PM No comments:

Journey to the Unknown: Eve

One of my resolutions for the New Year was to watch and review all the episodes of Hammer's 1968 TV series Journey to the Unknown. Though I had copies of these shows available to me for quite some time, I never got around to watching them. So it's time to fill this hole in my Hammer filmography.

Can't tell you much about the series in general quite yet: Whatever little I may at one time have read about it, soon vanished into mental oblivion so all I really know offhand is that this is one of Hammer's rare excursions into television and and that it wasn't all too successful. 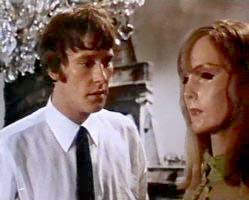 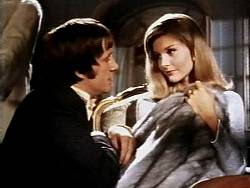 Eve premiered on September 28, 1968 and features a young Dennis Waterman as Albert Baker, a socially inept dreamer who watches romantic movies but is otherwise incapable of establishing any kind of relationship with the fairer sex. When he imagines a mannikin winking at him one evening while walking past the shop he works in, he straight away asks to be transferred to work as a window dresser to be closer to his new found love now christened “Eve”. His new boss, a cheating womaniser, is played by Michael Gough and provides the only link to the classic Gothic Hammer movies. When he orders the mannikins to be destroyed to make room for new ones, he seals his fate: Albert, afraid that Eve, too, will be burnt, tries stealing the dummy (as well as an expensive fur coat to keep her warm), but gets caught in the act by Gough, accidentally kills him and escapes from the police into the countryside. But will he find peace and happiness there? Well, don't hold your breath.

At this stage I don't have the slightest idea whether or not this episode was typical for the series overall. As a standalone, however, it is all rather pointless. For a show from the late 60s it is surprising to see Albert's love affair with the mannikin played straight and not for laughs, thereby given it a rather unsavory feeling. The trouble, however, is that the entire concept is just ridiculous beyond belief and on top of that the first 20 minutes are wasted on endless scenes of cliched soft focused, slo mo and psychedelically coloured images of Albert with Eve running through the forest or sipping champagne in luxurious surroundings. (In those scenes Eve is played by American actress Carol Lynley.)

Worse than these involuntarily funny scenes, however, is the utterly confusing characterisation of Albert. Despite the fact that we are supposed to believe that he considers the mannikin to be real we are time and again shown that he is quite aware that she is just a dummy. After all, why else would he request to be transferred to the window dressing department and why be concerned with the burning of the mannikins if he really believed her to be a hot blooded woman?

What is amazing about this episode, however, is how contemporary it was at the time. This surely must have been one of the first occasions where we see a hippie drop out get high on smoking dope on British television. And those bikers that we see towards the end could have come straight off a 1970s NEL pulp paperback.

Still, despite these touches this is a show that has outrun its ultra thin concept far before it hits the 50 minute mark and its anti climactic finale. Bit of a disappointment really. Let's hope the next episodes will improve on this lacklustre debut.
Posted by Holger Haase at 4:33 PM 14 comments: