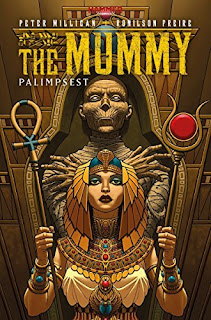 Titan had previously issued Marcus Hearn’s excellent HAMMER STORY, HAMMER GLAMOUR, THE HAMMER VAULT and THE ART OF HAMMER, so is the perfect choice for Hammer Studio related publications.

In the past you were able to enjoy Hammer related comic book stories in the pages of the legendary “The House of Hammer” magazine, predominantly adaptations of their films, at the time an ideal way to immerse yourself in their movies when easy access to them via DVD, Blu Ray or streaming was unheard of.

Titan Comics’ recent THE MUMMY – PALIMPSEST and CAPTAIN KRONOS: VAMPIRE HUNTER both go a different direction by taking the original Hammer movies and using them as a spring board to develop new stories.

Each of those two are perfectly readable and enjoyable in their own right but CAPTAIN KRONOS is the one that has the edge with regards to truly carrying the Hammer torch whereas their version of THE MUMMY really is only tangentially linked to any of the Hammer mummy flicks.

Though often flashing back to previous incarnations, most of THE MUMMY – PALIMPSEST is set in modern day London.

In the late 19th Century members of a secret society, the Sect of Anubis, discovered how to cheat death and gain eternal life via the Palimpsest ritual, which required them every 33 years to drink the blood of a female victim chosen to be the host for the ancient Egyptian Priestess Nebetah. Their current chosen one, Angel Kostenko, has been brought to London by sex traffickers but proves resilient in her fight against both her kidnappers as well as the Sect. She is somewhat aided by another group battling the Sect of Anubis, however, soon learns that those guys’ motives may also not be quite as benevolent as they seem to be.

This is a very effective mummy story but it is only borderline related to Hammer’s original MUMMY (a few brief glimpses of Kharis here or there) and despite the focus on a female mummy also has little to nothing to do with BLOOD FROM THE MUMMY’S TOMB. 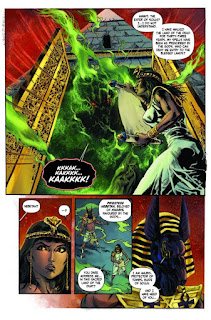 Even though the connections to Hammer are tenuous, this is a highly enjoyable read within the sub-genre of mummy literature and films with an ever so slight – cynics may say: token – feminist slant given that the current sacrifice is both a victim of sex traffickers as well as a pawn between two male-only member societies.

For Brazilian artist Ronilson Freire THE MUMMY – PALIMPSEST is arguably his biggest English language assignment yet as he is mainly known for work in his native country though has also been involved with DOCTOR WHO graphic novels and a number of other UK/US projects.

Up until I read the mini bio at the end of the comic, I was convinced that writer Peter (X-STATIX) Milligan was American as the weakest part of this graphic novel is the often ridiculously clunky, archaic and faux-English Upper Class dialogue by the members of the two Secret Societies battling each other. I was totally convinced that no one born in the UK would write lines like: “I am popping up to Scotland for a spot of shooting.”

Goes to prove how much I know….. 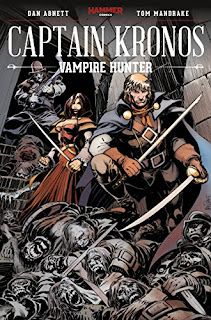 The CAPTAIN KRONOS: VAMPIRE HUNTER comic on the other hand is directly related to the characters in the movie and develops their story further.

The main hero was always one of the most original vampire hunters, a young, debonair, swashbuckling, pot smoking slayer who at one stage was even planned to be a time traveller, hence the name: Kronos.

No time travelling in this comic by writer Dan Abnett (GUARDIANS OF THE GALAXY) and artist Tom Mandrake (THE SPECTRE). Instead the plot reunites the three main characters from the movie –Kronos with his trusted sidekick, the eccentric Professor Grost, and sexy gypsy girl Carla who they encountered in the movie and who has now joined them along their way - for a new adventure following the film’s events.

Their journey brings them to a little village besieged by powerful vampires. When Kronos ventures out to investigate he doesn’t just discover that these are immune to sunlight but also unearths an even bigger mystery. 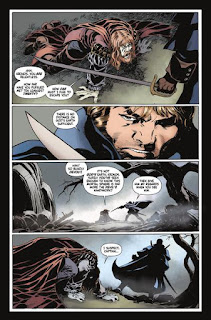 What this story does really well, apart of course from some grandiose fight scenes, is to depict the fact that in Kronos’ world there are all different types of vampires that each require a new strategy to defeat them, again setting this character apart from the more traditional vampire hunters.

Both comics also contain short articles by Marcus Hearn about the history of the original Hammer movies these new stories were inspired by. CAPTAIN KRONOS: VAMPIRE HUNTER also contains a foreword by Caroline Munro.

Overall am quite impressed with New Hammer’s comic book excursions into Old Hammer material with a modern twist and I’m hoping there’ll be more to come… but have a funny feeling this will be yet another short lived attempt to try and breathe new life into an otherwise moribund company.

Posted by Holger Haase at 3:22 PM No comments: