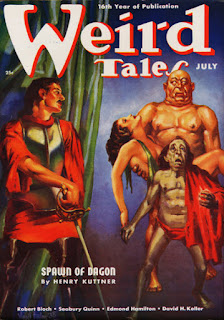 Just discovered this episode of The Alfred Hitchcock Hour from May 08, 1964 with Christopher Lee on YouTube. Not sure how long this will be on but it can also be viewed on DailyMotion.

The Sign of Satan was filmed at Universal Studios and is from the second season of the hour long program. This show was effectively a continuation of the previous half an hour long “Alfred Hitchcock Presents”.

The episode was based on Robert Bloch’s short story Return to the Sabbath, first published in “Weird Tales” (July 1938) when Bloch was just 21. Other stories published that month in the magazine contained Henry Kuttner’s Spawn of Dagon, Seabury Quinn’s Fortune’s Fools and Clark Ashton Smith’s Mother of Toads as well as a poem each by H.P. Lovecraft and Robert E. Howard.

It features Lee as Karl Jorla, an Austrian Devil Worshipper who features in a recording of a Black Mass. When that recording gets released, his acolytes suspect that he was behind this and threaten to hunt and kill him. A film studio hires him as an actor for a similar role, not knowing that what they had seen in the initial production was not a work of fiction.

During the satanic ritual Lee is heard speaking German and truth be told his German is better than the German accent he puts on when speaking English. He also appears to be wearing a head piece as well as some crazy bushy eye brows and some of the scenes evoke his Dracula, no doubt one of the reasons he was hired for the job.

All the occult references are very moody and must have appealed to Lee as an aficionado in that area. Though the premise of this episode is preposterous - no studio would have hired a No Name and put up with all those exorbitant requests and strange behaviour - the fact that this is one of those productions that show him amongst Satanists and Devil Worshippers with hints of Horror Hotel (1960) as well as future Dennis Wheatley adaptations makes this well worth checking out.

Lee mentions in his autobiography that he was anxious to leave his 12-week old daughter Christina behind which places his arrival around the February 15 mark. This was Lee’s first invite to Hollywood. Rather than being placed in a grandiose hotel as he had hoped for, he is put up in an unfinished motel, but has Marlon Brando’s dressing room.

Filming lasts two weeks and while there, he also meets one of his idols, Groucho Marx, as well as Ray Bradbury who had wanted him to play Mr. Dark in an adaptation of Something Wicked This Way Comes.

Prior to filming he was seemingly convinced he’d be directed by Alfred Hitchcock directly and only became aware that this was not the case when meeting Bob Douglas, the actual director. He only ended up briefly seeing Hitch from a distance and also lost eight of Ray Milland’s golf balls in a match against him in Bel Air.