Peter Cushing as a Mafioso 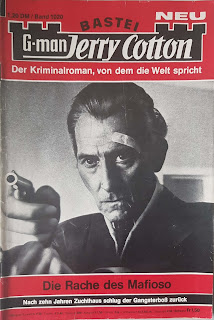 I recently published a 15.000 word eBook dedicated to the German series of Dr. Mabuse movies from the 1960s. I am planning this to be the first in a number of overviews dedicated to classic German Crime and Thriller flicks and for my next project want to approach the eight Jerry Cotton movies featuring George Nader as the eponymous FBI Agent.


Jerry Cotton is a series of German "Heftromane", short weekly 60+ page novels that are exclusively sold through news agencies and by now has run up more than 3000 issues over the decades. Especially in the earlier years they tended to show covers with stills taken from totally unrelated movies.

So imagine my surprise when I wanted to stock up on some of them for research when I came across this cover for Die Rache des Mafioso ("The Mafioso's Revenge") featuring Peter Cushing in a scene from The Satanic Rites of Dracula.

I was reminded of the time when I posted a similar cover photo from a Jerry Cotton novel featuring Veronica Carlson.

For the Cushing cover I am particularly intrigued as the original image of course also included a crucifix which had been cropped to make him more in line with the Mafia theme of this issue (that I have yet to read). 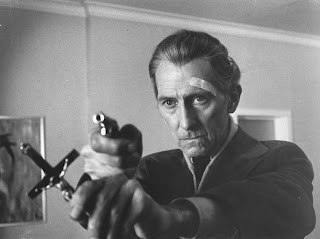 Posted by Holger Haase at 3:26 PM No comments: