Two videos filmed on the set of THE LEGEND OF THE 7 GOLDEN VAMPIRES.

The Dairy Council UK filmed an advert with behind the scenes clips of Peter Cushing and the other stars and crew members drinking some cold milk. (“Pick up a pinta… stay on top!”)

The BBC also came over and filmed a documentary FISTS OF FIRE about Shaw Brothers that incorporated clips of The Legend of the 7 Golden Vampires as well towards the end of its 30 minute running time.
Posted by Holger Haase at 7:52 PM No comments:

Wayne Kinsey: The Legend of the 7 Golden Vampires Scrapbook 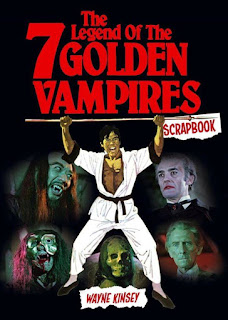 Wayne Kinsey’s Peveril Publishing House has over the last few years kept the flame alive for us Hammer Fans when it comes to sumptuously illustrated coffee table books.
Wayne had previously written a number of Hammer related books for more traditional publishers, some of which have now become collector’s items. He was also behind The House That Hammer Built, an incredibly in depth fanzine dedicated to all things Hammer and the research that went into publishing this was the basis for a lot of his subsequent oeuvres.
As successful as all his ventures were, Hammer by now is a very niche market interest so at some stage it became increasingly more difficult for regular publishers to justify those kinds of publications so Wayne together with designer Steve Kirkham set about creating their own independent imprint. The rules they use for their books can be summarised as such:
• Only the highest quality will do.
• They will have a very limited print run of usually 600-700 copies.
• They will only sell through their website so don’t bother searching for them on Amazon or elsewhere. • The books need to stay below 2kg as the postage rates would otherwise sky rocket. As a result their publications don’t come cheap but they are worth giving up on a few meals just to afford having them on your shelves. And once they’re gone you can rest assured that used copies will skyrocket in price in no time at all.
I have previously reviewed The Peter Cushing Scrapbook and their Hammer Locations.
I also own their non-Hammer related series of Fantastic Films of the Decades (three volumes so far) and their book on She. I have, however, missed out on some of their other books that have since sold out, most regrettably The Hammer Frankenstein and Hammer Dracula Scrapbooks.
So when their latest publication was announced, The Legend of the 7 Golden Vampires Scrapbook, I knew I had to get my hands on it. Though I was early enough with the ordering, my copy already is number 398 of 600 so by the time you read this, there may not be many more left.
The Legend of the 7 Golden Vampires with its melange of Hammer Horror and Shaw Bros Martial Arts was always a film I totally adored, maybe not even despite but because of its faults. (John Forbes-Robertson, looking at your and your lipstick.) It never ceases to entertain me whenever I come around to viewing it but it is admittedly at first glance an odd choice for a standalone book of its kind.
That is until you learn that Wayne is in possession of Cushing’s screenplay, arguably the only fully complete Cushing script still around and it features all his notes, drawings and costume suggestions.
Wayne also already owned Roy Ward Baker’s script with notes so those two scripts mark the centre point of this new book. Add a plethora of other photos and material covering all aspects of the production plus additional material relating to a range of unfilmed Hammer Draculas and you have yet another absolute Must Have from Peveril.

Posted by Holger Haase at 8:01 PM No comments: