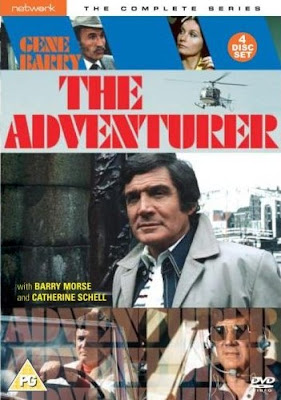 I just added a new page dedicated to ITC's The Adventurer to my Hammer Glamour site. Check back there regularly as over the next few weeks I will regularly add some more info about the episodes featuring Hammer actresses.

The series was one of ITC’s last. Catherine Schell (Moon Zero Two) appears in a supporting role in half of the episodes. In general this is a very worthwhile series for admirers of Hammer Glamour as a lot of these actresses show up quite frequently. Eight episodes were directed by none other than Val Guest.

The mix of classy European locations, suave banter and spy action was one that had previously proved popular for the company (e.g. The Persuaders), however, The Adventurer was not exactly well written and Gene Barry, rather than being an elegant international man of mystery, just came across as pompous and full of himself, quite possibly a representation of his real persona: Based on comments from fellow actors he was not a very popular person to be around with. The actor was previously known primarily for his starring role in the classic War of the Worlds (1953), but had also appeared in a variety of different TV series. Barry had also played a similar millionaire investigator in his series Burke’s Law.

Well, what can I say? I am a sucker for these kinds of shows and despite its limitations, this is an easy watch. As the episodes are only 25 minutes long they hardly overstay their welcome.

The show is available on Region 2 discs.

I would love to host a poll here for the most popular Hammer movie. Please let me know which ones I definitely need to include in it as the list needs to be somewhat limited. I would imagine 20 movies are the max that I should put on the list. And what are your thoughts: Should I allow people to vote for multiple movies or restric the voting to one movie each?
Posted by Holger Haase at 10:23 PM 2 comments: 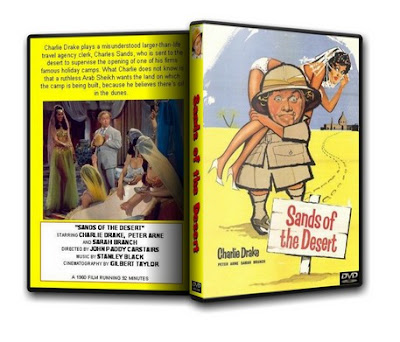 BBC news item about Beyond the Rave

Hammer Stills Exhibition at the BFI

Some news from Hammer's web site. If anyone goes, please let me know what the exhibition is like and if possible share some photos from it.

Hammer films became synnonymous with horror. Yet the company produced a wide range of films including comedies, period costume adventures, psychological thrillers and war pictures. These were frequently frowned upon by critics who viewed the company as the purveyor of inconsequential exploitation pictures-an unfair representation of a brand that was one of the biggest success stories of the British film industry. Many of our most celebrated actors and technicians worked for Hammer - Joseph Losey, Freddie Francis, Val Guest, Robert Aldrich, Terrence Fisher all directed Hammer films.

A selection of stills from the national collection are described by Wayne Kinsey and on display daily on the Mezzanine Level of the BFI 11.00am until 22.30pm daily.
Admission free.

Posted by Holger Haase at 5:01 PM No comments:

A bit old, but still worth mentioning...

Just stumpled upon some older blog entries from the near-defunct Reel Cinema Blog featuring some beautiful glamour galleries of Linda Haden and Caroline Munro. Worth checking out.
Posted by Holger Haase at 6:18 PM 1 comment:

Listmania: How many Hammer film series are there?

Well, here I was the other day, sitting on a sofa, staring into space and reminiscing about Hammer movies… as one does. About the Dracula flicks, and the Frankenstein series, the Dennis Wheatley adaptations. And all of a sudden I was wondering just how many different film series Hammer has actually been involved in. The longer I thought about it, the longer the list became until I finally picked up my trusted copy of Tom Johnson’s and Deborah DelVecchio’s HAMMER FILMS – AN EXHAUSTIVE FILMOGRAPHY and went through the list of their films one by one and started jotting down which of these belonged to a series.

This may sound obvious, but for me to constitute a Hammer series, Hammer would have needed to at least have shot two movies on that subject. The reason why I highlight this is because I excluded all one-shots the company filmed that were based on an otherwise popular subject such as e.g. the Sherlock Holmes movie The Hound of the Baskervilles or The Phantom of the Opera.

Some of the suggested inclusions for what constitutes a Hammer series are debatable. So please: Debate!

This is the series I fought over most about as to whether I should even include it as there are no common threads as such among them other than that they were all written by Jimmy Sangster, however, the Psychothrillers are often discussed as a separate chapter in Hammer’s history.

The films above are of course all the traditional Dracula movies featuring Christopher Lee. Dracula, however, also receives a mention or even appeared (though played by a different actor) in the following two movies:

And should I wish to widen the field even further into general Hammer Vampire movies I should also include:

Not too sure whether it actually makes sense to highlight the Pirate movies as a separate series as they do not have an otherwise recurring central theme or character:

The name Karnstein (or a subtle variation of it) is also mentioned in:

So, there we are. A little list of all the different series Hammer has been involved in. Have I forgotten something? What are your thoughts about it? And most of all: What to do next with it?

I am contemplating approaching those series bit by bit at some stage. In actual fact that could make a nice subject for a Blogathon with different bloggers approaching different series all at the same time. If any of you bloggers reading this is interested in taking part in such a project, then please let me know.
Posted by Holger Haase at 2:07 PM 5 comments:

Beyond the Rave trailer... update

Looks like the official Beyond the Rave website now has a link for their teaser trailer... that links to a MySpace account for the film.... that is set to private and can only be viewed by their MySpace friends.

Is it just me or is that by far the daftest way to try and promote your new venture???
Posted by Holger Haase at 3:32 PM 1 comment:

I had recently phoned in my order for the 2008 calendar by the Pilgrims Hospice in Kent featuring 12 postcard views of watercolour paintings by Peter Cushing.

When I called a very pleasant lady answered and queried where I had heard about this calendar. I mentioned the newsgroups and she said that she was only new in her job, but was already surprised how well these were selling. I advised that Cushing fans may not be legion, but sure were a dedicated bunch.

We had a pleasant chat and when she revealed that the calendars were only £3.75 (plus postage) I also advised her that they probably could have sold it for a slightly higher figure. She seemed amused to hear that and I promptly ordered two copies of what will no doubt become a bit of a collector’s item in the future.

She advised that she couldn’t off hand tell me how much postage to Ireland would be and promised to call me back with the info. I thought it would defeat the purpose to cheaply sell a charity calendar and then spend some of the proceedings in an International phone call, so – trusting that I would hardly be conned by a hospice – I told her to simply charge whatever it was going to be without the need to contact me back. And lo and behold I was only charged a fair £2.50 for p&p to Ireland, a total of £10 for those two calendars.

Below find the 12 motives depicted on the calendar.

The calendar is still on sale. You will need to order by phone by calling +44-1233-504102 and can pay by credit card. It’s a worthwhile cause and a truly original idea as those paintings have very rarely been exhibited before. 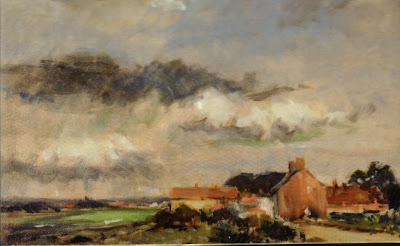 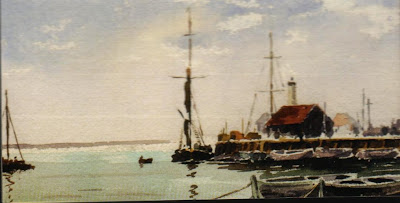 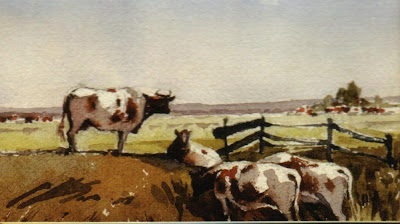 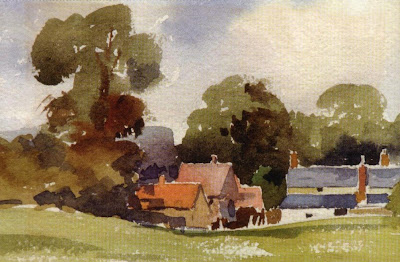 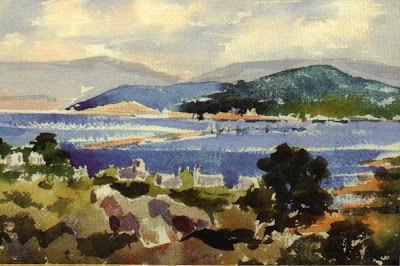 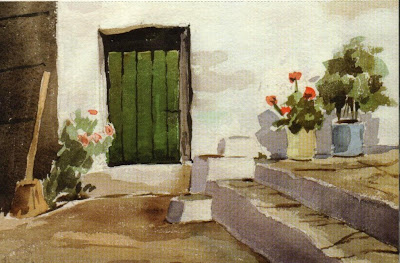 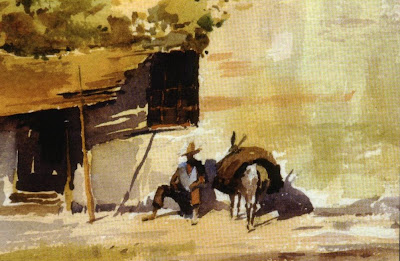 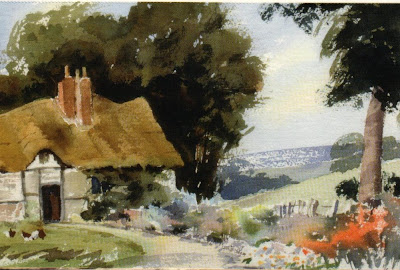 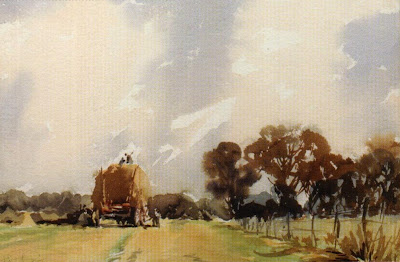 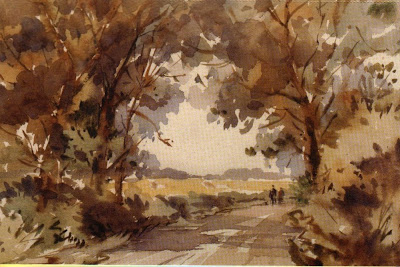 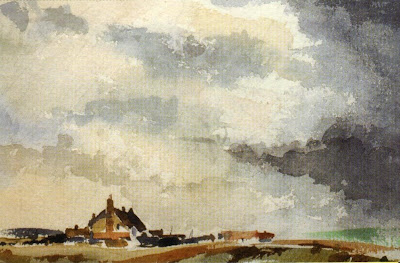 Beyond the Rave trailer... or not

I just received the following notice:

BEYOND THE RAVE!
Early in 2008 the world will watch as soldier Ed's nightmare unfolds in 20 terrifying episodes!
You can watch the teaser trailer NOW!
Hammer films presents a Pure Grass Films production 'Beyond the Rave'
Ed is flying to Iraq in the morning and he wants to have it large and boy, is he gonna get it!
After tracking his girlfriend, Jen down to a secret rave deep in the forest he realizes the terrible truth about the hard core party organizers too late..
Sex, death and bloodsucking rave tunes, 'Beyond the Rave' is a high-octane blend of kick-ass music and gruesomely enjoyable online terror.
ALL THEY WANTED WAS A NIGHT TO REMEMBER.
www.beyondtherave.net

Not too sure if I am doing something wrong, but for the life of me I can't see a trailer on the official website.

So I tried to google it and even though I still couldn't find a trailer I found this Behind the Scenes video from the guys at Movieweb.

A good while ago the BBC showed a documentary called CRUMPET about "a very British sex symbol". I was annoyed with myself that I didn't find a way to tape it the time it was on as this was a really fun little piece with some of my favourite actresses including of course lots of Hammer Glamour eye candy and also included interviews with them.

So I was pleasantly surprised to see some extracts posted on YouTube.