Paying my respects to Oliver Reed 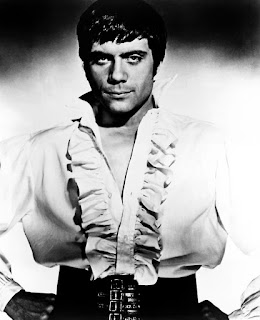 I moved to Cork (Ireland) Christmas 1995 and had previously travelled back and forth for a good few years. As such I was very well aware of the fact that Oliver Reed was living quasi in my neighborhood, in Churchtown, a little village just about 50km to the North of Cork City, just off the N20.

There he lived a fairly quiet life, made friends with the locals and all in all seemed to enjoy that no one made a major deal about the celeb living in their midst. He became a regular to O’Brien’s Bar and despite all the rabble rousing stories told about him, the only time his stay in Churchtown garnered any attention during his lifetime was in a very positive light that would endear him to the locals for years to come: When he heard about a young local girl who suffered from Tetra-amelia, a very rare syndrome that had her born without arms and legs, he arranged a fundraising campaign that would ultimately help to raise IE£ 800.000 towards her treatment.

So at the time I knew what I had wanted to do. Drive over to Churchtown and plank myself on a bar stool in O’Briens until Reed would show up. Things always came in the way but I always assumed that I’d have all the time in the world to get this arranged.

Alas, Reed surprisingly died in a bar in Malta during the filming of GLADIATOR. A good few years ago I had managed to visit the bar while visiting the island and noticed that at least at the time the owners had turned this – not necessarily tastefully – into an Oliver Reed shrine to attract the punters and in another bar by chance even met the guy in whose arms Reed had died. (More details on this encounter can be read in my article about it for THE HUNGOVER GOURMET #7)

Following his death, his corpse was laid to rest in Churchtown, proof how attached the actor had been to his last place of residence. The funeral ended up being a 10-Day-Wake with a number of celebrity mourners such as Michael Winner and Alex Higgins, leading to an influx of visitors that this village would likely never seen again.

And yet, despite living so close to Churchtown it took me until last summer to finally make it up there and in the end it took a visit by Hammer fan and historian Robert Simpson to get me off my backside and up to Reeds’s gravesite.

What struck us first was how utterly non-descript the place is: a village square, a pub or two, a church, a couple of small roads and that’s really it. 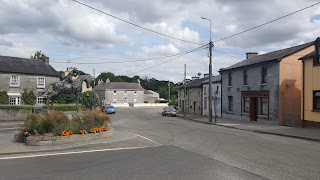 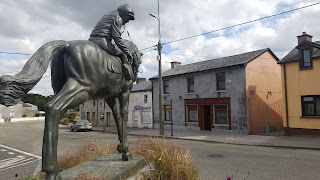 Bruhenny Graveyard, the cemetery in which Reed is buried is located just off the main square and O’Brien’s Bar and can be entered through a narrow lane that can easily be missed unless you look out for it. 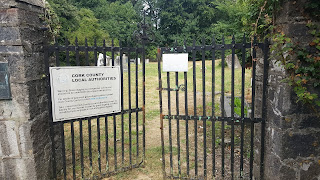 Inside one is struck by a feeling that this must be one of the most deserted cemeteries ever which makes it easy, though, to locate Reed’s grave which is just as spare as most of the other graves on the site. It has been reported that over the years visiting fans had drowned so much alcohol in his honour over the gravesite that flowers no longer grow on it which may explain why it now doesn’t stand out much anymore.

Instead a simple gravestone carrying his name (Robert Oliver Reed) and dates (1938-1999) together with the faded inscription “He made the air move” is all that now marks the final resting place for one of cinema’s most notorious rebel rousers. 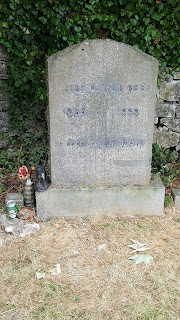 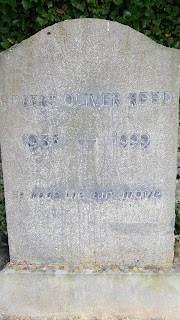 Robert and I remained a few minutes in front of the grave until heading to O’Brien’s for a refreshing drink just across the road. 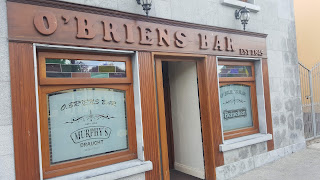 In contrast to the total overkill in Malta’s bar there is very little that serves as memory to their most famous patron. Where they respected his boundaries in real life and just treated him as one of their own, they continued doing so after his death and all that serves as a reminder now is a single photo of Reed whereas most of the other walls are dominated by horse racing images and memorabilia that reflect the importance of equestrianism for the area. 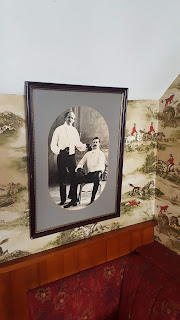 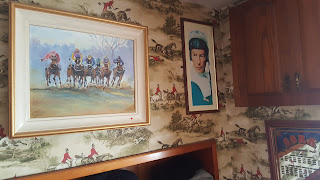 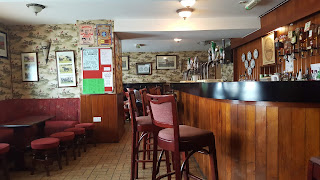 I guess we could have stayed and ask the elderly lady behind the bar or some of the few patrons that day about Reed and extract a story or two.

Truth be told it just didn’t feel right to interfere. No doubt no-one would have minded had we asked but we came to pay our respects and saw no need to further intrude.
Posted by Holger Haase at 3:04 PM No comments: