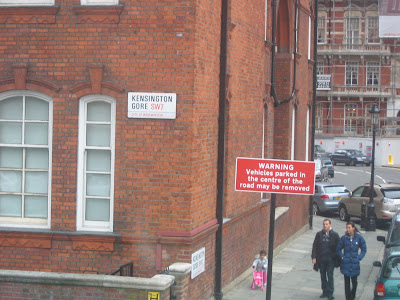 If I rewind back one year, one of my fondest memories is going to the Wayne Kinsey book launch/Don Fearney documentary at the Cine Lumiere. After the event a bunch of us walked back, immersing ourselves in what made this day special (having lunch with Caroline Munro, treating Edward De Souza for a drink or three), planning what to do next and other fanboy stuff. Someone brought up the subject of Kensington Gore and none other than Norman J Warren pointed out that this term for stage blood used in horror productions of the 1960s and 70s (i.e. most of Hammer’s output) was named after a London thoroughfare. Once I heard this, it was clear to me that this is where I wanted to go next, but unfortunately I couldn’t convince any of the others to come along, so dropped the idea.

Next time back in London for the Hammer at Bray event it was briefly discussed that we may check out the location, but nothing came of it.

When I then returned last month I had absolutely NO plans whatsoever to check it out, but guess what my eagle eyes discovered while travelling on the top of a double decker bus through London?

Yep, that street sign I’ve been dying to see for nearly a year now. I was surprised to see that this wasn’t a small hidden alley somewhere in the back of beyond, but in actual fact one of those very prominent main streets surrounding Hyde Park. So prominent in actual fact that I had been on it before without ever noticing its significance.

So should you ever visit the Big Smoke (maybe for this year’s Kronos event), you now know what to do.

Email ThisBlogThis!Share to TwitterShare to FacebookShare to Pinterest
Labels: Don Fearney, Other Stuff 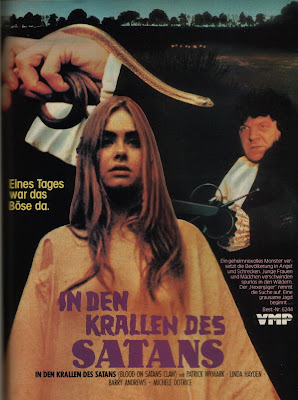 Blood on Satan’s Claw has been one of those films that continuously eluded me despite the fact that it has generated quite a lot of orgasmic comments about it over the years. It seems that this is one of those perfect cult movies, rarely seen, but highly appreciated, so I was glad to finally have the chance and watch this flick for myself when my buddies at the Bloody Hell of Brit Horror Group decided to discuss this more in depth.

When the furry remains of an unknown creature gets unearthed and people act strangely, start cutting off their arms, growing unsightly hair or killing off their neighbours, it soon becomes apparent that the devil (or at least a demonic creature called Behemoth) is meant to be resurrected and needs fresh blood to do so. The creature soon gathers a following under the leadership of Angel Blake played by Linda Hayden. Patrick Wymark as a Judge gradually learns how to best dispose of this new menace.

OK, here’s a confession: Prior to the viewing I hadn’t really known that this film plays in 17th century England. Well, call me fickle and shallow, but this is one period that at least on film I generally have very little interest in and that I generally find singularly unattractive. Those pompous wigs and forced “thee”-s and “thou”-s have over the years managed to repeatedly drive me bonkers and bore me to tears. And it would take a superior movie to make sure that I get properly immersed in this period. So the film started off at a slight disadvantage for me.

The overall mood of the movie is a mix of Witchfinder General and Wicker Man with a few smatterings of Village of the Damned. Witchfinder General as well as most of the other witchhunting productions that came in its wake were always modern movies: Their point of view was that of a modern audience, fully aware that witches didn’t really exist, that their killing and torture was a bad thing and that their prosecutors were at best misguided, at worst sadistic beasts. BOSC on the other hand starts with a non-believing Judge (Patrick Wymark) dismissing all talk of witchcraft or Satanism as superstitious hocus pocus (i.e. our modern point of view) and only gradually coming to terms with the thought that these are very real invasions that need to be battled with old methods that he had considered long overcome.

Angel Blake’s cult has less to do with our traditional concept of witchcraft or even Satanism, but instead resembles more the all singing and dancing merry pagan followers of Lord Somerisle. Of course seeing all those happy, at first glance innocent looking, campers makes the idea of them being an evil force even more chilling. The fact that most of those are described as children just adds to it. Of course, the trouble is that rather than have the followers then played by actual children, they are in fact played by young adults, trying hard to look like teenagers so that they just may get away with their description of them being “children”.

Unfortunately, there really is nothing in the sort of character development available when it comes to Angel Blake and her group. The first time we see her she is just a normal teen playing with the others, next she is the leader of her clan. No mention how this came about, why she was chosen leader, how she changed. It all happens rather quickly, just like it is hard to fathom how all the others changed so fast without anybody noticing.

Then again most of the adults in this movie are as daft as brushes. Take the mother of one of the victims as an example: While walking the woods one of the local boys approaches her and laughingly advises her that her son was killed. Distraught as she is about the murder, she seems to have completely forgotten about the encounter and doesn’t seem to figure that it may be a wise idea to have this boy captured and interviewed. Worse still, when her daughter gets killed, she ensures that one of the girls and fellow killers from the coven gets saved from the villagers and even tries to raise her as her own child! This just strains belief a little too much methinks.

Oh, and how did the villagers try killing that girl? By the tried and trusted method of throwing her into water to see if she sinks or swims. And sink she does…. yet she was never tied and bound (the crucial aspect of this test!) and they drown her at the shallow banks of a lake. How anyone can sink like a stone in these circumstances is beyond me.

Some of the scenes of possession and killing are indeed chilling, however, a lot is left half arsed and frequently laughable. The sure sign of anyone being possessed is the growth of devil’s hair on their body. Seeing people with bad hair days is quite typical for productions from the early 70s and just makes for frightening fashion faux pas, but not for very chilling horror experiences. Especially not if in the case of Angel Blake the devil’s hair is displayed as ridiculously large and bushy eyebrows that make her a) incredibly unappealing and b) distract from anything else in the scene. One can’t help but stare at this abomination while giggling insanely.

Worst of all, however, is the ending. Reckon To the Devil…. A Daughter was anti-climactic? Well, think again: After organising a massive villager’s attack on the coven, do we get to see great fighting scenes or daring attempts to rescue innocents? Hell, is the whole frigging cavalry actually needed? Errr, no: Angel Blake just turns around and pretty much voluntarily walks into the judge’s sword who then quickly kills off the Demon (Worst. Makeup. Ever.) without anything resembling a fight. Hell, he could have just thrown a stone at him from the looks of it. To make it worse, some of those later scenes are then shot in freeze frame as though anything of any importance had actually happened.

Reading over these lines it does look as though I didn’t enjoy the movie. Well, I did. It had a number of good mood setting scenes (mainly involving Angel Blake and her clan), but ultimately had just as many head scratching moments that can potentially ruin it for the viewer. It’s a movie that could have been great and has potential, but then wastes it all. Kinda like the best kid in class that everyone expects to make it big in the world, but just ends up with an average position in an average job and an average life. 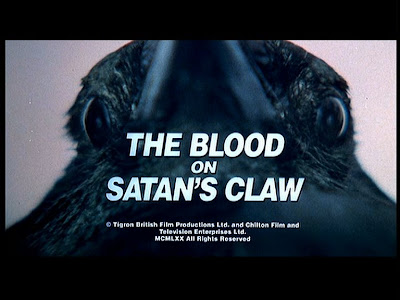 And if you are in any doubt as to how carelessly the film makers just put it all together, just read the credits at the start. Apparently it was a company called “Tigron” that produced it. If they can’t even spell the name of their own company correctly, there are little chances that they do anything else with a 100% focus on quality.

A bit old, but I only now discovered the trailer for BFI's Dracula. It really is different from the original and adds a nice, more "modern" take to it. Looking good....