It’s been a long time coming, but I finally watched the longer director's cut of the original Wicker Man.

This is one of the few films that I can recall where I did a complete turnaround. I first came across it on a very bad video copy that left me far from being impressed. I also didn't get it upon repeat viewings and nearly gave up on it until I read INSIDE THE WICKER MAN by Allan Brown.

The film then came out on DVD and based on reading the book I gave it one final chance and was blown away by it. Usually a good film does *not* require a pristine copy as the story can speak for itself, but in my case having a good looking print made a huge difference to my appreciation of the film. It is one of those productions that give you a little bit more upon each viewing, yet cannot be grasped by analysing it too much. The more you think about it, the less it’ll actually make sense. Best to appreciate it on a visceral level and enjoy it as a wonderful portrayal of two clashing cultures, moodily filmed, full of great performances and with a wonderful soundtrack.

Although I have now watched and enjoyed the production a number of times, I hadn’t seen the longer director’s cut, although I had heard a lot of positive comments about it. Now that I have finally seen it I can't, however, say that it really adds a hell of a lot that wasn't already in the theatrical release: some more singing scenes that make the film appear even more like a musical, some nudies which are always welcome but not quintessential, an earlier appearance by Lord Summerisle which kind of lessens the mystery about his character and a few more extended scenes that are neither here nor there. Most of all the much touted mainland scenes really are absolutely unnecessary: I much prefer the more subtle way of getting to know about Howie's priggish Christian life style and didn't need to have it rammed down my throat. So overall I think I can live with the knowledge that some more scenes may forever be buried in a field near the M4 (or whatever). For me the theatrical version is better and more tightly cut and the quintessential release.

At The Earth's Core featurette

Check out this contemporary featurette about At The Earth's Core. Absolutely great stuff with a lot of behind the scenes info that I had never seen before.

Posted by Holger Haase at 7:18 PM No comments:

Looks like I don't get around to much these days. Well, nothing much Hammer blog or website related, so let's post a couple of more links of interest to get the ball rolling again.

In What I Owe to Hammer Horror John Potts, Associate Professor and Head of the Department of Media, Macquarie University, Sydney, revisists his favourite childhood movies after 35 years to figure out whether they still hold up what they had promised in his memory and contrasts their imagery with teenage life in a small town in New South Wales.

Strictly ink Media have just released a set of new Hammer related Trading Cards. I don't own those yet, but from I have heard they actually are quite nice looking. It is just a pity that they advertise them with some very amateurish looking pictures on their website that from what I understand are not representative of the entire set. If anyone out there has seen the complete set, please let me know. 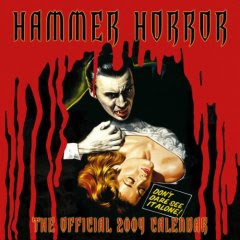 Say what you want about Beyond the Rave, but from a merchandise perspective New Hammer has made a couple of shweet decisions. Top of the list of every Hammerhead's Xmas wish list this year should be a new Hammer calendar that won't be released until the end of October, though is already available on pre-order.

OK, I admit it: I can't believe I have mentioned Christmas in July!

Posted by Holger Haase at 8:42 PM No comments: