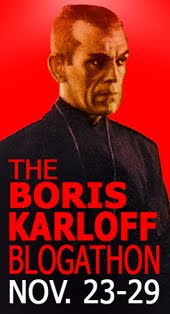 Frankensteinia, the Frankenstein Blog, has decided to roll out a Boris Karloff Blogathon in the week of November 23 - 29 in honour of Karloff's 122nd birthday on November 23. A good number of cult movie blogs have already decided to join and it sure sounds like a fun idea, so I'll contribute as well.
Not sure yet what I'll be writing about. I know I will NOT be writing about any Karloff movie that I have already seen, but may take this opportunity to film some gaps in my Karloff filmography. Alternatively I am also tempted to write something about his contributions to Old Time Radio. Karloff appeared in a vast variety of radio shows and this is an area that has never really been properly explored in articles about the man.
Let's see what I'll come up with in the next six weeks. And hopefully some more bloggers will join this celebration of the life and career of one of horror's most iconic personalities.
Posted by Holger Haase at 9:31 AM 2 comments: 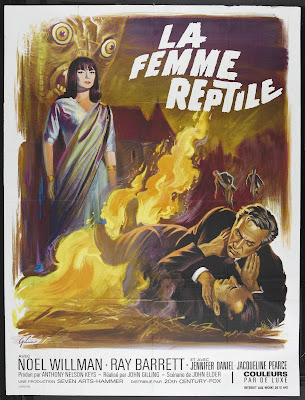 Following my announcement of Little Shoppe of Horror's upcoming 23rd issue I had a little Twitter discussion about The Reptile with my good buddy David Rattigan (webmaster of the Dictionary of Hammer Horror) which made me think of writing this little blog post.

I have recently – and quite timely from the looks of it – rewatched the second of Hammer's Cornish horrors after a previous one-off viewing way more than 20 years ago.

The first time round I remember not being too impressed with it, however, this time round I did start to appreciate the Cornish atmosphere as well as the original monster that Hammer created for this movie.

The film does, however, have a number of weird inconsistencies that IMHO stops it from being the masterpiece that a lot of Hammer fans seem to think it is and that reak of lazy storywriting. Mind you, I am generally not the type who obsessively looks for bloopers. If hard pressed ANY film will have some dodgy developments that could be questioned, but life's too short to worry about whether the third extra in the 9th row really carries the correct insignia in a WW2 movie, so when something strikes me as odd it usually means that it is big enough for me to carry an impact.

(I hate to highlight the obvious, but beware of spoilers from now on!)

And one of the biggest question marks I have with regards to The Reptile is over the fact that Harry Spalding (Ray Barrett) manages to escape relatively unharmed from a bite that kills all others in the movie within seconds. He, on the other hand, finds the time to run out of the house, through the forests, into his home and then save his skin by immunising the initial wound. How does he last that long and why hasn't the venom infiltrated his entire body at that stage? None of that is explained and given that in all other circumstances the victims don't even seem to make it past a few steps before collapsing this is an area that really expects the viewer to utterly and completely suspend all disbelief.

Other plot points that worried me:

Towards the end when Noel Willman's character decides to kill his daughter he is ready to strike her, but hears a noise from the cages and decides to first of all release the bunny rabbits. Huh? What kind of priorities does this man have?

Then he gets attacked by Marne Maitland, the cunning evil Indian mastermind behind it all, who attempts to prevent the killing. Once Maitland is disposed off Willman turns to Jennifer Daniel, the heroine, who stood uninvolved in the background and openly accuses her of interfering with the initial killing. How did he come up with that conclusion?

And to make matters worse: From then on in he stops everyone else trying to kill the reptile from doing so.

So.... first he wants to kill the daughter, then he wants to release the rabbits, then he fights off the Indian who wants to stop him from the killing, then he accuses the girl of interfering and rather than proceed with his initial plan he now turns a 180 degrees and effectively does what the Indian wanted to do in the first place.

Scratching my head, but I can't make head nor tail of this. Yes, you could argue that Willman's character turned mad, but I prefer method to my madness rather than this hodge podge change of actions.

Mind you, the film without a doubt overall is quite a worthwhile addition to the Hammer canon, but you will have to foresake a lot of logic when viewing this flick. Then again, logical plot development was never a mandatory ingredient for fan adoration. After all one of Hammer's worst plotted movies of all times, Brides of Dracula, regularly features as one of the studio's best movies of all times.

By the way, check out Wrong Side of the Art's fantastic overview of Hammer posters in case you are wondering where I borrowed the poster image from.

Looks like the new issue of "Little Shoppe of Horrors" is available anytime now and can as usual be ordered through Dick Klemensen's website. For those of you, like me, who are not based in the States it may, however, be more convenient to check out Hemlock Books. Based in the UK they have more attractive postage rates that will cut down on the overall price and the delivery time.
The new issue promises to feature an in depth overview over Hammer's Cornish Classics Plague of the Zombies and The Reptile. Just as well so that I recently re-watched the latter for the first time in probably two decades.
Posted by Holger Haase at 9:59 AM No comments:

Awful but kinda funny at the same time.