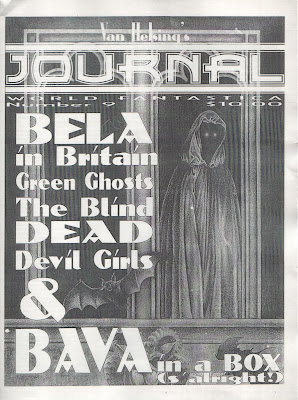 Van Helsing’s Journal # 9 is out now and carries an article by yours truly about Amando De Ossorio's Blind Dead movies as well as a number of other articles about Bela Lugosi’s British films, the Mario Bava box set, Dominatrixes from Outer Space, DVD reviews and lots more.

I had previously published some other articles and reviews in previous issues and one of these days I am confident that Harry Long, the publisher, will learn how to spell my name properly. LOL

Van Helsing’s Journal had emerged from the old Cushing Confidential Fanzine and is now dedicated to all things fantastic, with a heavy slant on often long forgotten silent movies and other productions worth of a re-evaluation.

Unfortunately, VHJ does not have a proper web presence, so check out your local cinema memorabilia stores to see if they have it stocked. Or else send an email or letter directly to the publisher for inquiries as to how to best order this publication:

A poster on my Caroline Munro discussion group revealed this week that Caroline had told him she would appear in a cameo in a new Dick Turpin film.

It's only a cameo role alongside Jeremy Bulloch and a new actor who plays Dick Turpin
(she can't remember his name), but she and Jeremy get held up by Turpin and robbed. She plays a lady. It's directed by Chris Stone and is being filmed in Staffordshire in April. Will let you know more when I get it.

Sky One tonight will show the first part of Terry Pratchett's The Colour of Magic adaptation in which Christopher Lee can be heard as the voice of Death. The concluding second part will be shown tomorrow night.

Speaking of Lee: A new poster for Cowboys for Christ, the Robin Hardy/Wicker Man reimagining of sorts, now also has Joan Collins' name firmly attached to it. The filming for Christopher Lee's part will apparently start in April.

Not a new film, but a rare Hammer: According to DVD Drive-In The Man Who Could Cheat Death with be released by Legend Films later this year. The same company will also release the Amicus productions The Skull and The Deadly Bees.
Posted by Holger Haase at 10:46 AM 2 comments:

First Beyond the Rave review

Looks like the first Beyond the Rave review is in.... and it is from none other than Hammer's own Ingrid Pitt. In an exclusive Den of Geek article she describes being invited to the premiere of the new Hammer movie/serial and her reaction to it. Us ordinary mortals will have to wait until April 16 when the first episode will air on MySpace TV.
Posted by Holger Haase at 11:33 AM 4 comments:

Email ThisBlogThis!Share to TwitterShare to FacebookShare to Pinterest
Labels: Beyond the Rave, Ingrid Pitt

I just tried to access one of my absolute favourite Hammer sites, the Hammer Books Library, dedicated to an overview over all the various Hammer Books and Magazines out there, but kept getting an error message. Does anyone know what's up with the site? I also don't seem to be able to get any Google reference about it, other than non functioning links from other sites. Please don't tell me that this site is no longer around as that would be a crying shame.
Posted by Holger Haase at 2:10 PM 1 comment: I have started watching my way through the 21 Hammer movies that make up the recently acquired Ultimate Hammer Box Set. I aim to view at least one of these films per week, but knowing my viewing habits only too well, I wouldn't be surprised if it takes me a few years to make it through this massive set.

I started off with Hammer's version of H. Rider Haggard's She. I had previously covered this production for the World of Hammer Glamour site and just re-read what I had written at the time. Must admit I was surprised how much I had managed to cover and am wondering where all my time has gone. I need to really start writing more in depth reviews again for those wonderful productions.

Speaking of Ursula Andress: Let's wish her a Happy Birthday in two days time (March 19). Conincidentally, Olinka Berova, Hammer's other She, also had her birthday this month (March 15) and, as we are on a roll, Eunice Gayson (The Revenge of Frankenstein as well as James Bond's Sylvia Trench) celebrates her birthday today on St Patrick's Day.

New Beyond the Rave trailer

A new Beyond the Rave trailer has just gone live on MySpace. You may need to register as a friend to be able to view it. Looks like the film/serial will finally be available from April onwards. The trailer's soundtrack is seriously annoying.... and at least ten years out of date. Let's hope that they may tone the music down for the film proper. Mind you, I did get serious goose bumps when I saw the blood red Hammer logo show up on the screen.
Posted by Holger Haase at 10:02 AM No comments:

Yep, it seems the fine folk at Optimum Releasing have seen fit to provide us with a Region 2 release of Yvonne's 1961 gangster pic, 'The Frightened City', at last!!

Here's a link to their website's promotion:

For those who haven't seen it, it's a tale of corruption amid a setting of smoky London nightclubs.

Star of the show is boxer Sean Connery, who's pressured into becoming an enforcer in crooked accountant Herbert Lom's new crime syndicate. Yvonne plays the love interest, and looks great doing it, as gangster's moll and nightclub singer Anya.

'The Frightened City' is a decent, if not classic, Brit gangster pic, and is well worth a watch, especially at the reduced price available on Amazon, and similar sites

Some ideas how to spend your money.....

*According to the DVD Drive-In (as well as some other sites) a Hammer Adventure set will soon be coming from Sony containing the following movies: STRANGLERS OF BOMBAY, TERROR OF THE TONGS, PIRATES OF BLOOD RIVER and DEVIL SHIP PIRATES. No release date confirmed as of yet, but these are films that have been gagging for a release for some time. Especially TERROR OF THE TONGS looked very doubtful ever to be released in these PC times we're living in. The same web site also announced that Hammer's THE NANNY will see a Region 1 Stateside release in April. That film had already been available on Region 2.

*Check out your local HMV stores for copies of the massive 21 DVD Hammer Collection. These previously sold for a recommended retail price of £149.99/€229.99. My shop in Cork (Ireland) this week sells them for €59.99 and reports from some UK branches suggest that there they are available for £35. Quite a drop from the initial price tag. Doubt that you'll ever get them much cheaper than this.

*An article in the Sunday Times highlighted the fact that Robert Sellers' highly praised and recommended book THE BATTLE FOR BOND had to be pulped after Tomahawk Press lost a case against the Fleming family. According to UK law they apparently quoted too much from court cases and broke copyright law. Some bookstores may still have the occasional copy left for sale. I e.g. managed to purchase one from my local Waterstones, but the book's online price tag is already increasing dramatically. This is bound to very quickly become a collector's item, so secure as many copies as you can find for the original price.

*Nothing Hammer or even Bond related, but a quick plug for a new Ebook published by good buddy and fellow blogger David Zuzelo. Together with Paul Cooke he recently published Tough To Kill, a guide to 1980s European Action Cinema. The book is chokefull with reviews of often rare Italo pictures, interviews and general overviews of the genre. And for just $2.50 you really can't go wrong. This is being published by Lulu, so I believe you also have the option of buying the paperback version for a few dollars more.
Posted by Holger Haase at 8:20 PM 1 comment: