Peter Hutchings: Hammer and Beyond - The British Horror Film 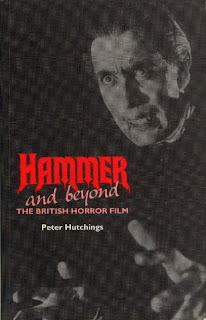 Look at the name of the publisher and you can guess what you’re in for: This is a very academic and dry book analysing the impact British sociological changes had on the development of British horror movies, in particular those made by Hammer. It’s not a terrifically good book and often suffers from overinterpretation and is littered with trendy women’s lib demagoguery: “By showing the vampire as a vampire-rapist who violates and destroys her victim, men alleviate their fears that lesbian love could create an alternate model, that two women without coercion or morbidity might prefer one another to a man.” Hardly a book that you’ll want to cover in one sitting. It now commands ludicrous second hand prices on Amazon that I won't even gratify with a link.

N.B.
I feel that I can't just transfer over this review without addressing something rather important that in nearly four years of blogging surprisingly enough never once had come up. And that is.... the name of my blog. And more importantly its connection to the book reviewed above. Why would I be paying homage to a Hammer book that I obviously didn't like?
Well, I didn't. At least not consciously.
When I set up this blog I knew that though I wanted to focus on Hammer movies I didn't want to just concentrate on Hammer alone but also wanted to be able to include info and reviews about other movies that Hammer actors and directors were associated with. I also wanted to have the liberty to talk about British and Classic Horror in general even without a direct link to Hammer if it so tickled my fancy. I was searching for a blog title that should incorporate that very clearly.
At the same time The Groovy Age of Horror went through some rebranding of its own and in order to highlight that they weren't just going to review classic horror pulp fiction anymore at least temporarily promoted themselves as Beyond the Groovy Age of Horror.
I really liked the sound of it and thought that this approach could do well for my blog, too, hence called it Hammer and Beyond.
Imagine my surprise when a few months later I spotted a link to the actual Hammer and Beyond - The British Horror Film book, a book I had read, loathed and forgotten years before starting this blog... yet also a book that is just a foot or two away from my writing place on a shelf with all the other Hammer books staring at me any time I write a review!
I had never once spared a second thought to it after I had finished reading it but of course must have subconsciously been aware of its existence when I started writing this blog. As the blog had already been established when I finally noticed the connection, I didn't bother changing the name. It still irks me a bit that I named this blog - albeit unconsciously - after a book I had disliked a lot but what the hell......
Nobody seems to have ever spotted it until now. Or people were simply to polite to mention.
Posted by Holger Haase at 5:36 PM

I remember being directed towards this rubbish when I was writing my undergraduate dissertation on British horror. The author also spends a lot of time using the theoretical model of psychoanalysis...a theory I've never had much time for. This reaches its absolute nadir in his discussion of X THE UNKNOWN where he suggests that the crack in the earth that emits the radiactive sludge is representative of the vagina!! - academic garbage.

If you never mentioned the connection to the book, H2, I'd never have known-lol- and Shaun - yes,I too hate these psycho babble essays and tomes on horror films -

I remember watching the old TOMORROW SHOW,the year that Peter Cushing was a guest (because he was appearing at the Famous Monsters Con that year-'75-so glad i went)along with Forry Ackerman and Leonard Wolf - the host got the lads talking about the symbolism in horror and Forry brought up the belief that the Empire State Building in KING KONG represented the erect penis and how it related to the impending rape (and potential bestiality) of Ann Darrow! Cushing thought it was ridiculous and basically said it was so much twaddle - then Wolf,i think,mentioned Van Helsing going about penetrating women with his "big stick" - Cushing laughed it off and said that "they were for killing the vampire,dear boy"...lol...love that guy.

Sure there are symbolic elements thru out horror's film history,but mainly they were made to scare and entertain us-period - you can find all sorts of stuff ,if that's what you're looking for-Wertham and his attack on comics in the '50s is a perfect example of someone seeing something in a media that he WANTED to see and the condeming them for what,to him,was "obvious" (Batman and Robin's homosexual relationship for example-Aunt Harriet was added to the comics-and TV show-to eliminate any doubts about their sexual deviancy-LORD what idiots!!)

What a fantastic story, Neil. I'd have loved to have been around to hear Cushing give that reply. ;-)

Hammer and Beyond (the book) gets a lot of criticism.

What people seem to be forgetting here, however, is that Hammer and Beyond was the first true academic study to consider British horror cinema in any length, and for that alone the author must be commended.

To what extent the book can be dismissed as 'academic garbage' by someone who also 'studied' British horror within the academy also seems slightly contradictory. The fact is, if one was to pursue an academic path in the early 1990s, Hutchings book was the only to consider it in relation to contemporary academic theories, and thus incorporate it fully within the parameters of academic discourse. Put simply, if Hammer and Beyond never was, it's likely that undergraduate courses teaching British horror may have never come to fruition when they did.

Hammer and Beyond, for all its faults, is not necessarily the best study on British horror, but it is an important one none the less.

The comments here, concerning symbolism in horror, proves redundant in light of the comments regarding the 'big stick'. You only have to pick up the source material for Hammer's Dracula: it simply oozes eroticism, and most certainly doesn't refute a Freudian interpretation (his theories are arguably those upon which contemporary understandings of sexuality are founded on). Neither does a sexual interpretation of X The X Unknown warrant a writing off as 'academic garbage'. Sexual symbolism permeates culture no end, to the extent it seems to me at least, silly to lazily write it off as just that, even if you disagree with the reading of it in that way.

From what I remember of reading this book, it offered imaginative analysis with reasoned caution. Though I haven’t often been drawn to heavily academic material, I found this quite fascinating.