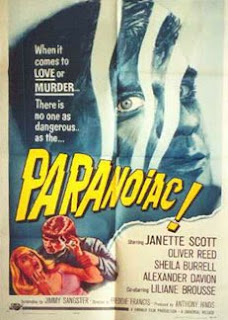 What is it with Hammer’s thriller movies? For all intends and purposes they all sound the same – a heroine driven to madness, the dead coming back alive (or do they?), twist endings, filmed in black and white etc etc – yet they all appear quite different and not at all repetitive. Maybe it is because they use a range of different actors for these thrillers whereas they always relied on a number of regular stock players for their horror output, but despite the initial similarities in Jimmy Sangster’s screenplays all of these productions are well worth a look, provide solidly good entertainment and are a great way to pass some 80+ minutes.

Thanks to the release of the cheap Hammer Horror Series box set it is now possible to re-evaluate two of these psycho style movies: Nightmare and Paranoiac.

Paranoiac is the first Hammer movie directed by award winning cinematographer Freddie Francis. He had previously added the lighthouse scenes for The Day of the Triffids starring Janette Scott and was re-united with her for this Hammer movie. She plays Eleanor Ashby, a young woman, who has already lost her parents in a plane crash and her teenage brother a few years previously had killed himself while jumping off a cliff. Her surviving brother Simon is played by Oliver Reed who is intent on driving her insane so that he can get his hands on the family fortune. His plans, however, seem to start going astray when the brother who was considered dead (Alexander Davion) apparently arrives back at their door steps.

This is an exceptionally well cast movie. On top of Janette Scott the following actors deserve a mention: Maurice Denham is the family solicitor. Sheila Burrell has some wonderfully OTT moments as Aunt Harriet: one moment she is the reserved back bone and protector of the family’s good name, the next she turns into a maniac lunatic who has quite clearly lost all her marbles. Lilianne Brousse has previously appeared in Hammer’s Maniac and again impresses as a gorgeous French girl with cute accent. It’s a pity that she subsequently didn’t do much of anything and now appears to be missing in action, a fate she shares with many other Hammer starlet.

Despite the plethora of excellent performances, this is Oliver Reed’s film! He gives a tour de force performance that is unrivalled by any of the other actors and one of his career best. In actual fact, when he plays the drunk, threatening and screaming bully one wonders how close this comes to some of Reed’s real life shenanigans. During the course of the film his character gradually turns from sardonically smiling schemer to enraged spoilt brat – no-one ever drove more vengefully over a flower bed – to certifiable lunatic when he ends up playing the organ to a skeleton. Francis also reserves one of the most imaginatively filmed moments of the movie for Reed when he shoots him from below water level with the waves distorting his facial features as a symbol for him finally crossing the line into madness completely. He sure was a handsome man at the time and wonderfully portrays the beauty of evil.

Some of the spookiest memories carried over long after the film is finished will also involve a freaky mask and a child’s creepy singing voice.

The release of "Paranoiac" as the first Hammer Blu-ray may have surprised some people , but it's a solid thriller as highlighted in your write-up, and Eureka's disc is a big step-up from previous viewings.