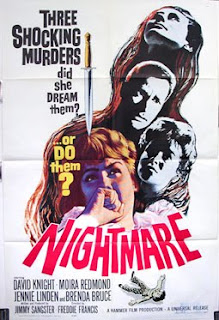 Another one of Hammer’s ventures into Psycho territory, scripted as usual (and also this time around produced) by Jimmy Sangster and directed by Freddie Francis.

Jennie Linden plays a young girl who is haunted by nightmares of her mother who was institutionalised after stabbing her husband. The opening scenes of the movie showing Linden walking through an empty asylum until she is faced with the lunatic mother are spinechilling and well executed. The subsequent scenes show a beautifully snow covered wintery Oakley Court that substitutes as a girl’s school.

As her nightmares upset the other girls she is transferred back home, where the bad dreams continue: She is faced with the constant presence of a strange woman in white who walks through her house and is later identified as the wife of her guardian (David Knight) who she then attacks in panic.

Linden is constantly carrying a little puppet, but appears far too old for that. She also kisses her guardian right smack on the lips when she meets him again hinting at a slightly unnatural, quasi-incestuous relationship.

In true Psycho style the film changes focus mid-way through its short 83 minute run: Whereas the first half concentrates on Linden’s character, the second half deals with her nurse played by Moira Redmond. What both girls have in common: They can scream. A lot. And loudly. Very loudly!

Julie Christie was initially scheduled to play Linden’s part, but then pulled out at the last minute to shoot Billy Liar.

Of course, if dissected under a microscope none of the plot would make the remotest bit of sense, but that really doesn’t matter: The film is slickly filmed and lot of fun to watch. It’s a little gem of a movie that was rarely seen until recently, but can now be easily accessed thanks to the excellent and very cheap box set of eight Hammer movies that was released a few months ago.

I love this kind of film. Not seen this though, so thanks for reviewing it! What a great poster.

Thanks for the nice review! I just watched this last night and i love freddie Francis' style: though he directed, his visual flare is imprinted upon this murderous melodrama. You're right on point, once dissected the plot dies, but it beathes with a half-life. I really enjoyed it and hope you review leads others to see this under-appreciated Hammer thriller.