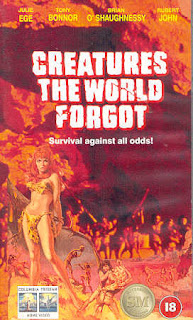 The one without the dinosaurs..... That's how the third concluding part of Hammer's prehistoric trilogy can best be summarised.

It is hard to really like any of these films. The stories are always weak, bordering on the non-existent. The purely grunting dialogues leave absolutely no room for proper characterisations, humour or any kind of subtlety. Alas, the first two movies - One Million Years B.C. (1965) and When Dinosaurs Ruled the Earth (1970) - had enough monsters and female beauty to keep at least the guys in the audience satisfied. Ray Harryhausen's and Jim Danforth's dinosaurs may have been historically inaccurate, but they were certainly wonderful examples of stop-motion animation. And Raquel Welch and Victoria Vetri sure managed to keep the boys awake during the show.

Creatures the World Forgot, unfortunately, lacks on both counts.

The "creatures" of the title are certainly not of the stop-motion kind. And Julie Ege - brunette in this film - sure is a stunner and can easily measure up to her predecessors, but it takes an agonisingly long 55 minutes until we first set eyes on her. Her character in the film is really nothing more than a supporting part and gets very little time on screen, although Ege herself was advertised as the "new star" on the bill boards and also received top billing in the cast list. 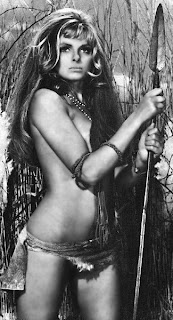 The actual story plays over 20-odd years and describes the wanderings of a prehistoric tribe. First we have this dark haired tribe that meets this blonde haired tribe. Dark haired leader and blonde girl give birth to twins, one (you guessed it!) dark, the other one blond. The blond one is the good guy: intelligent, compassionate and good looking. The dark one is sly, devious and cruel and hates the good one's guts. Traces of Cain and Abel everywhere you look. Everything comes to an end when the Good One finally has enough of his evil twin's murderous ways and is locked together with him in a fight to the death. Only one can survive. Can you guess who?

The plot of Creatures sure isn't hard to follow. Therefore, it is quite annoying to be confronted with regular flashbacks that help "explain" the more intricate parts of the story.

By the time Julie Ege enters the scene, the tribe has managed to invent the fire as well as cooking over fire, a net to help hunting animals.... and to the chagrin of the viewers: the fur bikini. Whereas most of the females of the tribes have shown precious little regard for clothing of any kind up to that time, Julie Ege keeps insisting on wearing that stylish bit of prehistoric lingerie. In actual fact: Most of her promotional photos for the film are far more revealing and promising than in the actual film.

She plays the daughter of yet another tribe's chief encountered during their journeys. The Good Blond Guy promptly chooses her as his wife, soul mate, partner.... or whatever else the prehistoric equivalent may be.

What about the acting? Well, the acting is as good and as confident as can be in a film that deals with prehistoric cavemen. No sign of Oscar performances anywhere. Just look nice and grunt must have been the main instruction by the director. At least Julie Ege did not have to struggle with her Norwegian accent for a change. 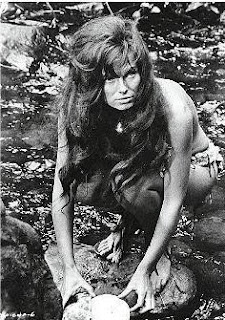 Where the film does score is in its stunning scenery. Creatures was shot in South Africa and makes the best possible use of the country's awesome countryside. Some of the scenes of the tribe's everyday life - involving hunting and preparation of food - are quite realistic in a MONDO kind of way. I for one am certainly not entirely convinced that no animal was hurt during the production of the film.

The stunts were arranged by Frank Hayden who also plays the son that kills his own father at the beginning of the film and gets the whole show started.

A blurb on the original poster art work boasted: "They don't make them like this anymore.... not in a million years". I guess that could also be said about films of this kind.