“What Horror Means To Me” by Christopher Lee 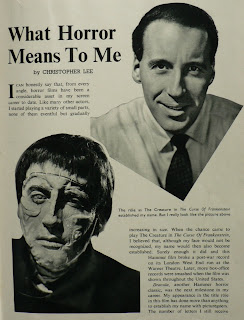 I recently came across this amusing little piece in the 1959-60 edition of the Picturegoer Film Annual.
.
Picturegoer was a British film weekly that catered predominantly to the teenaged film fan, with plenty of colour pin-ups of the latest hunks and hotties. A little surprising, therefore, to find dear Christopher in such company, alongside features on The Pin-Up Way To Stardom ("Barbara Lang believes the emphasis should be on curves"), Lana Lives Down Her Past ("In Imitation Life Miss Turner wears many gorgeous gowns") and Can Bardot Cover Up? ("her favourite garments seem to be a towel, a blanket, or the most unsettling underwear").
The most interesting part of his piece, apart from the fact that he is already, in 1959, to be found ruminating on typecasting and the potential pitfalls of a career in horror movies, and explaining why he'd "rather call them films of fantasy", is its rather charming underestimation of their cultural longevity. Though he does, surprisingly perhaps, refer to Dracula as "another Hammer Horror classic" so soon after its savaging by many British reviewers, he sweetly notes in a picture caption that:

And fifty years later, you'll still be receiving them. Probably more, in fact.
. 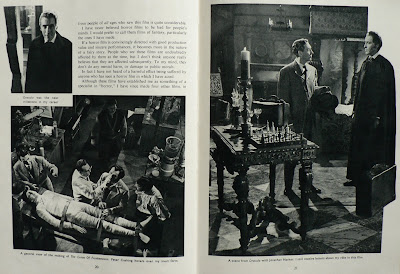 "I can honestly say that, from every angle, horror films have been a considerable asset in my screen career to date. Like may other actors, I started playing a variety of small parts, none of them eventful, but gradually increasing in size. When the chance came to play the Creature in The Curse of Frankenstein, I believed that, although my face would not be recognized, my name would then also become established. Surely enough, it did..."
. 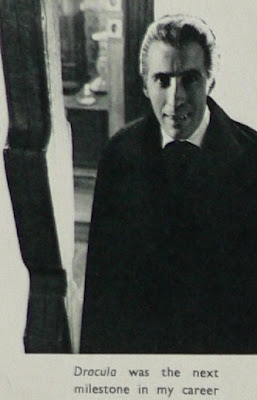 "I have never believed horror films to be bad for people's minds. I would prefer to call them films of fantasy, particularly the ones I have made. If a horror film is convincingly directed with good production values and sincere performances, it becomes more in the nature of a fairy story... I have not heard of a harmful affect being suffered by anyone who has seen a horror film in which I have acted."
. 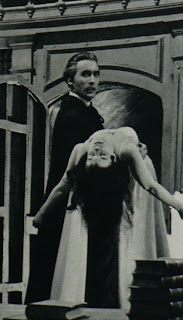 "Although these films have established me as something of a specialist in 'horror', I have since made four other films, in which I have played completely different characters, none of them remotely gruesome. I don't feel in any danger of becoming 'typed' if I continue to appear in horror parts such as in The Mummy...

"It is of the greatest importance to me nowadays that I should be known internationally. I am in the process of furthering this aim by working all over Europe. I have just made a film in Germany and hope soon to make one in Yugoslavia... With The Mummy, I seem to be following in the steps of Boris Karloff, of whom I have long been a great admirer. In fact, I recently made a film with him called The Doctor of Seven Dials. If I can have as successful career as this noted 'pioneer' into horror fantasy, I shall be well content."
. 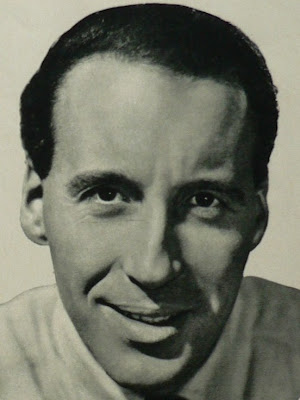 Posted by Matthew Coniam at 1:06 PM

Wow, that's an interesting find! Thanks a million for sharing this one, Matthew. The scans are excellent and I really loved reading about Lee's comments at such a relatively early stage in his horror film career.