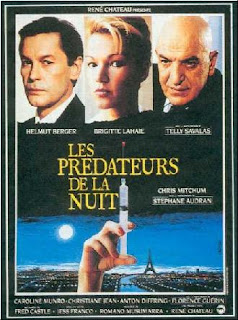 This eclectic mix of genuine film stars and film stars’ sons, genre icons and scream queens, art house muses and hard core actresses must count as the most easily recognisable cast for main stream audiences that Shlockmeister Jess Franco ever managed to compile. Following the relative success of his previous film Dark Mission (also with Lahaie and Mitchum as well as Christopher Lee), he was now given a budget that even allowed his stars to stay in 5 Star Hotels in Paris. Franco has previously been known to siphon off money for one production and secretly produce an additional picture with the same cast and on the same sets. This time, however, Rene Chateau’s – the producer’s – reign was tight enough to make sure that all the money went on this one film. And the end results prove this to be the right approach: Though the film still has more than enough of Franco’s usual sleaze and gore mix, coupled with moments of sheer lunacy, it is this time filmed in a much more convincing and stylish way and has none of the annoying examples of out of focus camera work that mars so much of the director’s other output.

Brigitte Lahaie, the producer’s girlfriend at the time, teams up alongside Helmut Berger’s plastic surgeon Dr Flamand and Anton Diffring’s Nazi Dr Moser. Together they are trying to restore Flamand’s sister’s (Christiane Jean) face that was burned by acid when confronted with an ex-patient of his who wasn’t too happy with her own operation’s result.

In order to restore the face, they kidnap a bunch of local beauties and perform a face transplant operation not unlike that in John Woo’s later picture Face Off.

Berger’s Flamand and his sister Ingrid seem to have shared a very close, if not incestuous bond. His obsession for her is genuine and all he’s interested in is to give her her face back no matter what it takes.

Diffring’s Nazi doctor also shares a very unhealthy love for his gruesome work. His steely blue eyes generally do not reveal any hints of human sympathy for his victims. He only loses his cool when his first operation goes horrifically wrong and he’s heard shouting: “Scheisse! Scheisse!” in his native German.

Together the three of these characters make up a wonderfully amoral trio. They’re not just plain stereotypically bad, but are shown as people totally void of normal compassion, living in a world that is just dominated by what is right for them. In a scene towards the end of the movie, we see them toasting each other. Flamand’s sister again looks suspiciously similar to Christiane Jean not to Florence Guerin whose face she is supposed to carry. Gleefully happy about the apparent success of their operation, Moser raises his glass overwhelmed with emotion over seeing them all happily together again and utters: “Deep inside I am a real sentimentalist!” That, more than anything else, sent shivers down my spine. Nothing like a baddy with a twisted sense of what’s right and wrong.

But don’t get me wrong: This is not really a character study first and foremost!

The Special Effects are most of the time incredibly convincing and often painfully hard to watch. We do occasionally get a slightly dodgy puppet effect that is supposed to show a decapitated corpse, but overall the gore looks more than real. The operation scenes will make you squirm and have a genuinely disturbing sadistic touch to them. The victims get operated on while being conscious and the final victim has the dubious pleasure of being shown her face *after* it has been skinned off. Stephane Audran as a very nosey patient gets another very realistic looking needle into her eye that’ll have you yell “Ouch!”

Some of the other choice trash moments on view also show Mitchum battling a gay body builder - Bet his Dad never had to do that! -; Berger visiting a loopy female patient who spontaneously bursts into some bouts of very bad German opera; a female prisoner of his unceremoniously gets her arms chopped off during an attempt to escape.

Caroline Munro’s part is effectively a supporting role, so she sure ain’t the one with the longest screen time, but – whoah – what a part it is! It is unlike anything else we have ever seen her in. When she comes on screen first, we see her as ravishing as ever in a model shot, then leaves the shot to go snort some cocaine before being kidnapped by Lahaie’s character. Held imprisoned in the hospital she is giving us some very unlady-like looks up her skirt. Her subsequent rape scene is painful to watch and a harrowing bit of acting. Munro admits in a later interview that she wanted to show the brutal misery of the act, and therefore deviated from the original script that was apparently going for a much more superficial “sexy” act. When trying to escape from her captors, she subsequently tries seducing the hospital’s Igor type character and is so overtly sexual I felt like having a cold shower.

She had previously worked with Howard Vernon in Paul Naschy’s Howl of the Devil and was soon afterwards also acting again with Florence Guerin in Luigi Cozzi’s The Black Cat.

He shares a scene in a mortuary with French actor Henri Poirier who seems to relish his part as an American bashing arrogant French cop: “We don’t like your kind of people who chew gum and only take their hands out of the pocket to work over the suspect’s face. You might think yourself a Bogey, but you don’t even have a trench coat or a hat!“ A classic!

And I better not forget to warn you that you’ll be humming looney tunes from the film’s Europop soundtrack for days to come.

Long lost in cinematic limbo just like Munro’s other late 1980s Eurotrash outing Howl of the Devil, it is a genuine surprise why this film never had a bigger impact in fan circles. It may have been too radical for the mainstream audiences it tried to reach, yet too mainstream for the loopy world true Franco aficionados seem to live in. It sure works for me, however.

Taking into account the fact that Faceless was up til now nearly impossible to get a hold off – dodgy looking 10th generation videos of the title occasionally went on sale for very good money -, *any* new release of the film would have been welcome. As such it is even more welcome to see what a wonderful piece of work Shriek Show’s recent Region 1 DVD release has been.

The film is finally available in glorious remastered colours and will quite possibly be the best version of the film you are ever likely to see.

The DVD is chock full with extras that include:

So is this a perfect DVD?

Well, it would be if it wasn’t for a little snag at the end of the movie that’ll have you hollering in rage at your TV, threatening to kick in the player if you weren’t aware of it when you started watching the film. Once aware of it, however, it just becomes a minor annoyance.

For one reason or the other Shriek Show’s version has Telly Savalas’ final sentence uttered…. in French! So instead of his proper English performance, you have a French dubbed Savalas speaking to his off scene assistant and saying:

“Jenny, book me a flight to Paris!”

Not trying to give away too much of the plot, but this seemingly innocuous sentence makes a major difference for the viewer’s perception of a film that has a great ambiguous open end. Even if Shriek Show could not obtain an English language copy of the scene – the film after all *was* filmed in English -, it will remain a mystery why they could not at least subtitle this very short passage.

Apart from this issue, however, this film is an absolute Must for Munro fans (the interview and photo gallery alone are worth the price), a Must for Franco aficionados (who will, however, probably complain how much their hero was put on leash by Rene Chateau) and at the very least a definite Maybe for anyone only remotely interested in getting acquainted with the wonderfully whacky field of European Shlock movies.

Only question that remains: When will Howl of the Devil find its way to DVD?