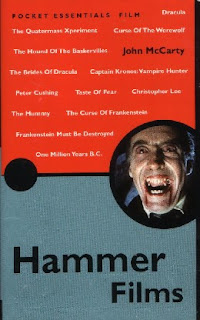 
"Pocket Essentials” is a very popular series of cheap books dedicated primarily to Film Directors and Genres, but also to history, literature or other areas of general interest. They usually are below 100 pages in length and as such never intend to be anything more than introductions into the subject matter at hand.

Still, there are differences between the various entries: Where its Hitchhiker’s Guide e.g. is only the second book ever to deal with the phenomenon of Douglas Adams’ famous Sci Fi series and offers an excellent look at all of its incorporations, Hammer Films is one amongst a multitude of books about the company and even as an introductory read has little to offer. Nearly half of its content is nothing more than a lengthy filmography with only some very rare lines of comments hidden amongst the cast and crew credits.

The remainder of the book offers a very short and selective history of the Hammer studios and 1-page reviews of their most interesting – according to the author - and famous movies. Some of the opinion is bordering on the asinine. On (Horror of) Dracula he e.g. writes: “It is Van Helsing, much like Dr Frankenstein, who is the real villain of the piece.” Huh?

The book borders on the seriously eccentric when it recommends Hammer related websites without accompanying URL!

Still, it is a cheap oeuvre and currently seems to get off-loaded by a lot of book stores for even less than its initial cheap price. So it won’t break the bank and as such probably does belong into every Hammer Library even if it’s just for completeness sake.

I've got this book and I find it very useful for browsing. I carry it, along with others in the pocket essentials series, in my man-bag.