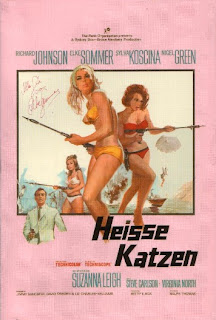 Bulldog Dummond was a hardboiled British detective character who appeared in scores of books by his creator H.C. McNeile alias “Sapper” and - following his death – Gerard Fairlie. At the height of his popularity his adventures were also frequently adapted for movies and radio.

Deadlier Than The Male is a curious adaptation in that it was made at a time when the character was hardly as popular as in his heyday and in actual fact if anything this film resembles more a James Bond adaptation rather than a proper Bulldog Drummond movie. Throughout the movie the character is never really addressed as “Bulldog” and nothing much was made of it either in the promotional material. If anything it appears as if everyone was anxious to avoid any reference to the character’s literary origins.

Hammer scribe Jimmy Sangster was asked to provide an original script based on the character and also helped out on the production side. As a result he claims that this was the only film for which he still occasionally receives royalties for his producer status. Hammer’s accountants apparently were pretty efficient in constantly proving that their films never made money.

Deadlier Than The Male is always compared with the Bond movies of the time. I did it, too, and it is quite obviously a production that swims on the popular wave of 1960s spy films. I would, however, go one step further and say that this film is even better than your average Bond movie! If Bond films concentrate first and foremost on Bond, then the baddies and last but not least on the girls, Deadlier Than The Male turns the format around and puts its emphasis first on the girls – and what kinda gals! -, then on the baddy and at last on the spy, pardon: insurance investigator. (Never thought that profession was that glamourous!) 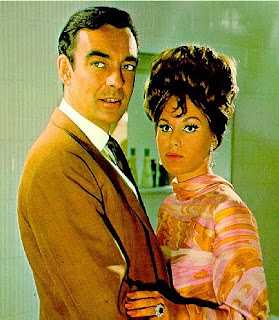 Drummond is called to investigate a mysterious series of murders that appear aimed at destabilising the oil industry. The killings are committed by Elke Sommer and Sylva Koscina who are both drop dead gorgeous and delightfully sadistic. They seem to relish in the idea of off-ing their victims in ever more ingenious ways and appear quite apt at handling exploding cigars and poison rings. The most iconic scene - a wonder Tarantino hasn’t copied it yet – involves them coming out of the sea bikini clad and shooting their next victim with a harpoon.

Sylva Koscina is a special delight: Her character likes to play with her victims beforehand and just can’t keep her paws off other people’s possessions. Little wonder that the German version of the film was called Heisse Katzen (Hot Cats).

Sommer’s best moment is when she tries to turn Drummond into a male whore by promising him freedom if only he succumbs to her charms. And he nearly appears to fall for it! Bond never was so pussy whacked.

Between Koscina and Sommer there is a very flirtatious and rivalrous relationship and they share some of the best lines of the film together. When a character falls from a balcony in a fake suicide we have them say: “I’ve had men fall for me before, but never like this!” And need I say that I thoroughly fell for their European accents?

Suzanna Leigh is one of Petersen’s girls, but changes sides the moment she meets Drummond. Leigh is forced to wear the most ridiculous looking hair cuts and wigs. Later on in the movie we actually discover a dramatical reason for those, however, one can’t help but suspect that her more brunette/mousy coloured tones in the film were forced on her as not to clash too dramatically with Elke Sommer’s blonde hair do and make sure that the limelight is not taken off Blonde #1.

At one stage Leigh is made to strip and thrown off a yacht into the sea, but don’t bother with the freeze frame like I did, lads, as she does end up wearing some flesh coloured little nothings on her way down. 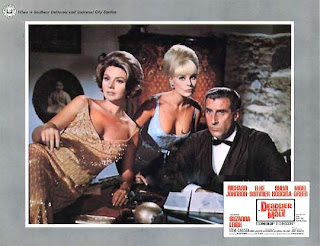 Nigel Green as Carl Petersen, the film’s megalomaniac baddy, has surrounded himself with a veritable harem of girls from every corner of the world. The only guy amongst them is Hammer stalwart and ex-wrestler Milton Reid who does his usual best as a stoic, silent and vicious henchman. The showdown between Petersen and Drummond is on the board of a gigantic chessgame, the figures of which threaten to smash the combatants. A scene that you just have to watch at least once in your life.

Drummond is played by Richard Johnson who comes across very non-chalant and debonair. It is at times hard to recognise him from his later movies such as Lucio Fulci’s Zombi 2 or Sergio Martino’s Island of the Fishmen. In the movie he lives with his nephew (Steve Carlson) who also has his uncle’s eyes for the ladies and brings home Virginia North. North has become a bit of a cult figure due to her appearance as Vulnavia in The Abominable Dr Phibes. Whereas she is more silent eye candy in that film, it is good to see her properly act and talk in Deadlier Than The Male. She admits to her preference for older men and in a hilarious scene ditches the nephew and tries to storm her way into Drummond’s bed room.

Add some gorgeous shots of the Italian coastline and a very strong title song from Walker Brothers’ Scott Walker, and Ralph Thomas has managed to create a very enjoyable piece of wild and funky – or is that groovy? – 60s pop art, an absolute Must See.

The film was a great success and a sequel – Some Girls Do (1969) – was shot three years later to much lesser acclaim. For that film Richard Johnson reprised his role as Bulldog Drummond. Virginia North was the only other person to be used in both films. In the follow up she played Robot Number Nine. Robot Number One incidentally was played by Yutte Stensgaard.

Another favorite of mine with a stunning Elke Sommer on the height of her career and unearthly beautiful in her role.