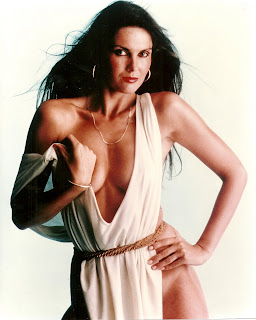 Caroline Munro is one of Hammer Glamour’s most stunning looking actresses. She probably did more to speed up some adolescent boy’s libido in the 1970s than any of the other female stars of the studio. Then again: I may be biased as Munro has always been one of my two favourite female stars of all times. (The other one being Jacqueline Bisset.) I can safely say that if it wasn’t for her, this web site may not be around, my book and DVD shelves may look different, and – God forbid - I may even have a completely different set of friends (both online and off).

But, yes, as long as I can remember I was a fan. Born in 1967 I remember watching her movies for the first time on the big screen. The very first time I saw her was either in Starcrash or At the Earth’s Core, two films that still carry a lot of nostalgic ballast for me even if everyone else these days appears to just find them fun on a “so bad it’s good level”. Yes, these days the effects are decidedly shoddy and would not fool today’s more refined teens, but at the time they actually *were* quite convincing and stirred a sense of adventure for “the boy who is half a man and the man is half a boy”. It also stirred up other things that are better left unsaid. I was enamoured hook, line and sinker and have followed her career ever since and had the privilege of meeting her for the first time during Bray II and to arrange an online interview session with her for my discussion group. In person she is one of the finest and most genuine people you are ever likely to meet and always looks as if she enjoys her time with her fans as much as they enjoy meeting her.

And she still looks absolutely vavavavvoom! 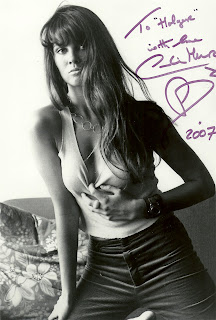 Munro started off as a model and singer. Her first single Tar and Cement featured up and coming Eric Clapton, Ginger Baker and Jack Bruce of Cream and Steve Howes of Yes as backing musicians. Munro became a very familiar face (and body) when she became the Lamb’s Navy Rum Girl and for nearly a decade was shown from posters and bill boards all across the UK. It was in actual fact one of these that drew her to the attention of Hammer Management who signed her up for a deal that included her parts in Dracula A.D. 1972 (1972) and cult favourite Captain Kronos: Vampire Hunter (1972).

Apart from those two Hammer flicks, Munro appeared in a number of high profile parts in the 70s that up to this day has her endeared to her fans: She was Sinbad’s companion Margiana in The Golden Voyage of Sinbad (1973), played naughty in the inane, but very watchable Rosemary’s Baby rip off The Devil Within Her/I Don’t Want to be Born (1975) alongside Joan Collins and Ralph Bates, went native for the Edgar Rice Burroughs’ adaptation of At the Earth’s Core (1976) with Peter Cushing and Doug McClure, became the Bond Girl with the sexiest screen wink ever in The Spy Who Loved Me (1977) and finally had her most active leading role while wearing some of her most amazingly fetishistic costumes in Italo Sci Fi Starcrash (1978).

Nearly more interesting than the projects she appeared in are the ones that she did not. For a variety of reasons – including her famous non-nudity clause - she missed out on a lot of parts that may have moved her up a few ranks on the celebrity ladder. At this stage one can only dream about how Munro would have looked in adaptations of Modesty Blaise, Vampirella or in a Starcrash sequel. Or how about her playing a were-woman in Altinai? 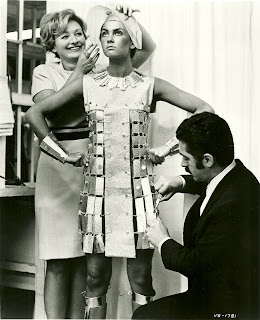 The 1980s saw her relocate more towards US and Continental European Trash Cinema. Her films became nastier and more exploitative. Her part in William Lustig’s Maniac (1980) was hastily added when she became available for the film. She subsequently played again alongside her Maniac and Starcrash partner Joe Spinell in the totally mindless idiocy that is The Last Horror Film (1981) before embarking on a journey with some of Europe’s more infamous Trash directors when she appeared in Paul Naschy’s Howl of the Devil (1987), Jess Franco’s Faceless (1988) and Luigi Cozzi’s The Black Cat (1989).

Following the Cozzi production, Munro took a long sabbatical in order to concentrate on raising her kids. During the 90s she only appeared in cameos in one or two movies, mainly as a favour for the film makers. Things started hotting up again when she set up her fan club and started touching base with her loyal fans. She also teamed up with musician Gary Wilson and – as Wilson Munro – recorded a CD with three musical duets.

Caroline Munro is currently one of the most sought after Hammer Glamour girls and is regularly jetting from one convention to the other both in the UK and the US as well as occasionally in some other countries. Her latest appearances can be checked on her official web site.

She also recently filmed two cameos again, for Flesh for the Beast (2003) and The Absence of Light (2004). Her most public appearance – and in actual fact one of her best roles ever! - was for a Doctor Who Audio CD called Omega.

A documentary dedicated to Caroline Munro - First Lady of Fantasy had also been released to great critical acclaim. 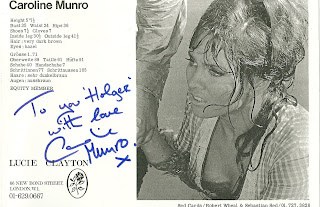