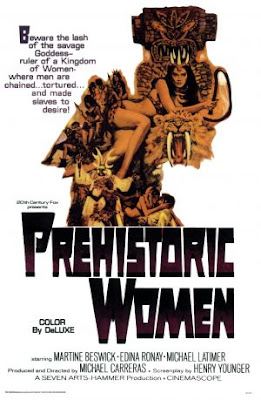 Slave Girls aka Prehistoric Women (1966) is one of the Hammer films with the absolutely worst reputation ever. Not only is it not getting a lot of love from snotty nosed regular critics, it also gets little respect from the general Fandom and during 1994’s Fanex convention was even voted the Worst Hammer movie ever.

Now I gotta admit that I often enjoy Hammer films with dodgy reputations and even go as far as saying that Lost Continent is a genuinely underrated classic that deserves a better rep. And though I wouldn’t go as far as saying that Prehistoric Women is genuinely good, I do have to admit that I found it thoroughly enjoyable on a shlocky level. There’s more than enough that this film has to offer to warrant giving this a chance.

Prehistoric Women is the longer US cut of the movie that was released in the UK under the title Slave Girls and not only recycles the fur bikinis from the previous year’s One Million Years B.C., it also recycles story lines and concepts from other productions such as Martine Beswicke’s cat fight from From Russia With Love, the idea of having the queen of a long lost tribe fall in love with a contemporary male from Hammer’s own She or the dubious imperialistic attitude towards native tribes from just about any Tarzan flick.

All of this makes for a strangely familiar, yet entertaining hodge podge of ideas. I couldn’t help but be mesmerised by the very blatant symbolism of the infamous white rhino’s horns (see Beswicke caressing it and you get it easily, see the male lead doing likewise and lift a knowing eye brow) or the obviously phallic shape of the demon’s nose (or whatever he is meant to be) regularly lurking in the jungle. Listen in amazement at hero Michael Latimer’s equal rights for men and women speech! Listen to the haunting tunes and dances of the natives (well, white ladies in fur coats) and try and get the melodies out of your head before you go bonkers! Laugh out loud at the dodgy back screen projections that make some extras behind Latimer look like 9 foot giants!

Yes, it is bad, but it is also strangely entertaining and best viewed with a six pack of your favourite brew.

Let’s not forget that one of the main reasons (nay, *the* reason) for this picture was to show scores of lovely ladies with little clothing. And if you’re only remotely interested in Hammer Glamour, this is the film for you. Martine Beswicke was born for this kind of role and displays an amazing screen presence and athleticism. One of the main (ahem) revelations for me was Edina Ronay as one of the blonde haired slave rebels and love interest for the hero. Ronay later became a popular fashion designer who is still quite popular amongst the fashionistas and even has a portrait of hers displayed in London’s National Portrait Gallery.

One of my favourite films, Prehistoric Women combines all the prerequisite elements of a "Non-Monster" Hammer classic.
I'm glad I don't attend fan conventions. To be surrounded by a thousand or more "fans", who fail to appreciate entertainment of this calibre would be unbearable.