Demons of the Mind 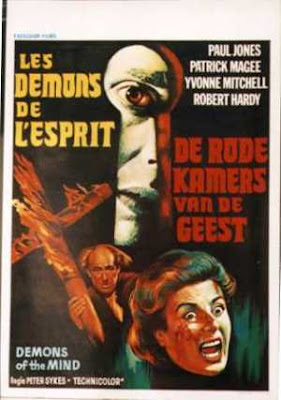 Today's the day that Shane Briant's new novel WORST NIGHTMARES is officially going to be released. I have been on a little Briant trip over the last couple of days and amongst others watched Demons of the Mind. My good buddy Ade Salmon at one stage had written a review on one of the discussion groups we frequent and kindly allowed me publish it on my Hammer Glamour pages. Here's what he had to say about this movie:

Demons of the Mind casts a heady brew of incest and murder across an evocitive gothic landscape. Two grown up children, Elizabeth (Gillian Hills) and Emil (Shane Briant), are effectively imprisoned in their mittle euro mansion by their raving father Baron Zorn - played enthusiastically (much slicing of much HAM) - by Robert Hardy. The Creeping Flesh’s escaped madman (Kenneth J Warren) plays his bald pated manservent Karl.

Demons of the Mind is a hard film to truly love - it's meandering storyline demands concentration from the viewer - though it's intention to bring something *new* to the Hammer pot was appreciated. Christopher Wicking's idea of fusing the birth of psychoanalysis within the framework of essentially a psycho costume drama produces variable results. Visually it's a feast - Emil flaunts about like Jim Morrison in acid orange shirt (and bares a vague similarity to Emil from Vampire Circus). The naturalistic forest footage transports you momentarily to the Circus of Nights ambience - but that's pretty much where the similarities end.

60's Popstar Paul Jones (Manfred Mann) makes an appearance as *the hero* - but he's bland at best, whilst Michael Hordern wanders the forest as the comedy relief manic priest. It's all decidedly odd. Patrick Magee's mesmerist psychiatrist Falkberg rounds off the cast - bringing much needed gravitas to the story - his mesmeric twirling *device* reportedly based on real apparatus.

Like any respectable 1970's offering from the house that originally dripped blood - we get some fleeting full frontal nudity from Virginia Wetherall (albeit through a mirror image) and much bloodletting - the suicide of Zorn's wife a throat gushing extreme example - that sets us up nicely for the giant burning cross staking that film culminates on! BLOOD forms the subtext of the film (original title – Blood Will Have Blood) , though its intended lychanthropic storyline got vetoed early on - for the more serious study of a cursed hereditory bloodline associated with madness rather than furry fiends. If the film falls short anywhere it's in the fact it reverts to the Hammer *default* towards the end - where regulation torch wielding villagers chase Zorn through the deep woods - whilst Hordern struggles along with the burning crucifix.

should you be claiming this one for the 999 Challenge if it isn't your review text...
Referee!
;)

Haha, good point. I said I would blog about the movies I have seen. I saw that movie (check) and blogged about it (check), even though I didn't have to write it myself.

Pheew, I hope that got me off the hook.

I have at least half a dozen films that I could slot into the 999 category that I have already seen, though not posted a single line about. Of course Neil would just claim it as part of his challenge when he just watches the movie. ;-)

Heehee-H2 knows me too well.

since i'm not finished with my book list yet on the 999,i will hafta add Shane's novel-it's on it's way now to the casa del Vokeso-

and as far as DEMONS goes,i'd have to agree with Ade for the most part-i will add that it does contain what i feel is one of the best setpieces in a Hammer-it's when Hardy and MacGee are arguing in the study and Hardy pulls a gun...well,no spoilers here,but those of you who have seen it know what i'm referring to-short but sweet...;o)