The Gambler and the Lady/Heat Wave 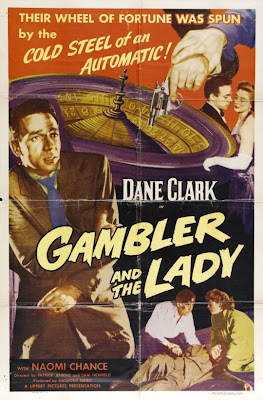 So I finally found the time to look a bit further into my collection of Hammer Noirs and recently treated myself to a little double feature.

I must admit I always find intriguing how little Noir the Hammer Noirs often are. Case in point: The Gambler and the Lady. Though with a very heavy focus on crime, this is primarily a (melo)drama about a gambler (Dane Clark) from the States who tries to establish a gambling empire in London while secretly harbouring the ambition to be accepted by the ruling classes. His often comical attempts at learning the proper manners, however, just make him a laughing stock amongst the often cash poor, but class rich nobility he is dealing with. When some rival American mobsters come and take over his gambling dens and some of his blue blooded society friends take advantage of his ambition, he soon learns that dog-eat-dog is prevalent at all levels of society just as friendship and loyalty can be earned everywhere.

This film proved to be the first of three pictures Hammer shot with American actor Dane Clark who indeed was the most convincing of all the Hammer Noir stars. The film also features supporting roles by Eric Pohlmann and George Pastell and is a generally entertaining and well made time waster, in other words pretty much on a par with the average Hammer Noir entry. 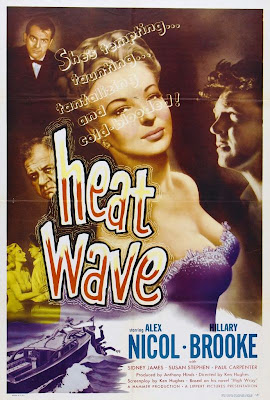 Heat Wave on the other hand is actually a proper Noir movie and one of the best of Hammer’s sub-genre. Though I generally prefer the American release titles in this case the original UK title The House Across the Lake is a much better choice as there is no sign of an Indian Summer Key Largo style anywhere in sight.

Instead we get to meet Alex Nicol (Mark Kendrick) who narrates his downfall in typical Noir style via the use of Flashbacks. Nicol is a starving writer and self confessed male slut who just can’t resist anyone in a skirt, and who one night unexpectedly gets invited to a party in the mansion across the lake from his own much humbler abode. There he befriends the millionaire owner (Sid James) and his man hungry wife (Hillary Brooke, looking a wee bit past her prime in some of the scenes). No points in guessing what devious plan the wife and her new lover will soon concoct and who will ultimately be dropped like a hot spud once the dirty deed is done.

If the story sounds familiar, then that’s because it truly is the quintessiantal Noir plot of good guy turned bad under the influence of a scheming Blonde. It also bears a remarkable resemblance to Bad Blonde/The Flanagan Boy. Let’s see: Ambitious young man makes friends with a friendly rich old man and against his better judgement starts an affair with his manipulating wife. The two decide to get rid of the husband by killing him on a boat near his mansion. Sounds pretty much carbon copy to me.

Both films also star Sid James, though in Heat Wave he has a much more impressive role as the cuckolded husband. If there’s one thing that watching Hammer Noir taught me it is to see James in a much different light. For all those only familiar with his performances from a myriad of Carry On movies only it will come as a surprise to see the full range of this actor.

Future Chitty Chitty Bang Bang director Ken Hughes adapted and directed this flick based on his own novel “High Wray”. The success of this Hammer Noir ensured that he was subsequently able to move on to bigger and better things.

From a geek perspective the most exciting aspect of this production is how well the Bray Studio buildings and the adjacent Thames River locations were utilised. It is hard to name any other Hammer production that presented the building and garden that clearly without any major refurbishments. The way Down Place looks in this film is pretty much the same way it still looks now. I was giddy with excitement when I could easily identify some of the spots I actually stood on myself when attending the Hammer at Bray functions. Incidentally Heat Wave was one of the very first - if not the first - Hammer production shot in Bray Studios and for that fact alone is clearly a Must See for anyone interested in Hammer Films.