The Institute of Séance 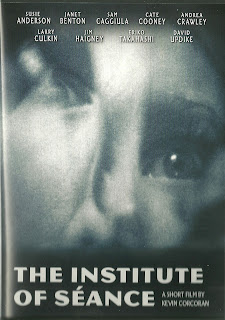 Following my Rondo post about nominated short movies, Kevin Corcoran, the director of The Institute of Séance, got in touch with me and kindly provided me with a copy of the DVD. When he heard that I was based in Ireland he also made me the guinea pig for the new PAL/Region 2 version of the production that is now available from Createspace and as far as I can see is otherwise identical to the regular NTSC/Region 1 release.

The Institute of Séance is a 10 minute (well, 9+ minutes on Pal) short shot in the style of classic silent movies.

Following the mysterious death of the director of the County Institute of Science a séance is being initiated to determine what really happened.

It would have been easy to make this a silent movie spoof, but despite the fact that the actors do use the exaggerated style of acting associated with this kind of movie, the short is a very loving and appropriate homage to a kind of film making that only a small niche of general film movie lovers now still follow regularly. The imagery is haunting and has followed me more in my mind than most imagery in much lengthier and higher budgeted films these days. In actual fact I got so excited about the concept after watching it that I finally succumbed and followed this up with a screening of the latest (and most complete version) of Metropolis that had so far eluded me. Why I don't watch more silent movies given that I generally like them a lot is beyond me.

The extras include a director's commentary, the feature trailer, storyboard comparisons, production photos and trailers for Cube Zombies and The Cracked Man (that don't exactly have me running out in excitement trying to locate copies). The title cards are available in English, German and Japanese.

I am still in two minds about the $10 charge for what is essentially a bit less than 10 minutes worth of film.

On the one hand that is quite a large per minute charge given that Hammer Horror and Adventure Icons sets are now available for pretty much the same price on DeepDiscount and each feature four classic movies and a number of special features.

On the other hand $10 in the big scheme of things isn't all that much money. If I go out for a pint or three I tend to spend way more in one night and all I get is a lousy hangover whereas here it is possible to at least support some very talented non-professional film makers.

Would I have preferred is this had simply been made available for free (or against a donation) online like a number of other non-professional film productions? Absolutely! I also think that going the fee way may have ultimately cost the film makers a lot of potential audience. Surely, after spending all the time shooting a project like this, they would want people to actually see it.

But given that the film has now been released the way it is, I would say: Go out, support your local sheriff and get a hold of this production if you're in any way interested in silent movie homages. Also go ahead and check out the official website.