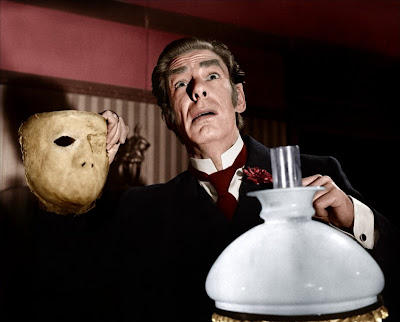 Over at Carfax Abbey last November, I combined my obituary of Ingrid Pitt with a birthday tribute to Michael Gough, who had then just turned 94.
Alas, now it is Gough's own turn for the solemn farewell.

Elsewhere I have called him one of the true unsung heroes of the British horror film, and it seems certain to me that we should think of him in relation to Lee and Cushing in the same sort of way that we think of Zucco or Atwill or Carradine in relation to Karloff and Lugosi. Like those men he was a reliable supporting presence in prestige horrors, a beautifully uninhibited star turn in the more cheap and cheerful varieties, and outside of the genre entirely, a talented and respected character actor.
His two Hammer Horror roles highlight this dichotomy, and stand as excellent tribute to his gifts.
In Dracula his resourceful Arthur Holmwood makes an excellent partner to Cushing's Van Helsing, his early mistrust of the eccentric vampirologist (as seen in the powerful scene in which, grief-stricken after Lucy's death, he tries to rudely dismiss him from the room) giving way to respect and friendship as he grasps the true nature of the danger to his friends and family, and joins Cushing in his crusade.
By contrast, as Lord Ambrose D'Arcy, the chop-licking villain of The Phantom of the Opera (above), he is a wonderfully malevolent presence: petty, vindictive, brutal, a sexual predator, and prepared to lie, cheat and destroy in pursuit of success. Gough comes at the role running, with his hair greased back and nostrils flaring, making the man - though a grotesque of near-Tod Slaughter proportions - nonetheless convincingly unpleasant with his propensity for drunken lechery, callous indifference to suffering and sudden explosions of rage. It is a measure of his excellence in the role that we feel cheated when deined the splashy death scene we have so long been anticipating for his character!

If you want to see him in charge of a whole show, look to his several collaborations with Herman Cohen, who used him rather as PRC used George Zucco. Like Zucco, Gough seems to love the opportunity to seize the main spotlight and really let rip, in an unforgettable gallery of mad scientists, psychopathic deviants and perverts.
Truly, he was one of the most important and cherishable figures in British horror.

I'll miss him; he was a great actor whom you would always look forward to seeing when you knew he was in a particular production as a supporting player.
OUT OF AFRICA
BRIDESHEAD REVISITED (1980 TV version)
HORROR HOSPITAL (Fantastically over the top)