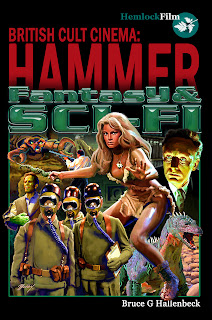 Bruce G. Hallenbeck and Hemlock Books have done it again. Following their first publication (The Hammer Vampire: Read my review, buy the book, do it now!) the two have teamed up again and this time focused on Hammer Fantasy & Sci-Fi.

And just like the previous book this one's a keeper.

For starters: This is the first full length work dedicated to the Hammer Fantasy and Sci-Fi movies. As much as I have enjoyed most of the Hammer books that have come out in the last couple of years, most have covered well trodden grounds and either focus on general Hammer history or more particularly on their Gothic heritage. It's significant that a lot of the last few books about Hammer were very much visual treats. I love a coffee table book just like the next fan but the recent glut of those is symptomatic for the fact that, well, there really is only so much that can be said about them. Very soon we are going to have a situation similar to the Universal industry where writers have to depend on dragging out Dwight Frye's next-door neighbor's second cousin's grandson to come up with anything remotely new.

With Hammer we're luckily not quite there yet and some parts of their filmography are still relative Terra Incognita... or should I say Uncharted Seas? Their Sci-Fi and Fantasy output e.g. was only ever covered in a few articles here or there and even then primarily focused on some of the films individually but was never deemed sufficiently interesting enough to warrant a proper book.

Hammer Fantasy & Sci-Fi is also a beauty to look at. Starting with one of the most stunning looking Hammer book covers I have ever seen it then follows the format of the previous work. It's richly illustrated mainly in black and white but also carries a coloured 8-page section in the middle.

So it's got a relatively unexplored subject matter. It's gorgeous to look at. But is it a good read?

And yes, this was a rhetorical question.

By now we already know that Hallenbeck is one of a handful of Hammer's most important historians. And he certainly hasn't started losing his mojo with this tome.

This is not just a film by film analysis. This is a proper history of those movies. Hallenbeck is not just contend to review the individual movies but also properly places them in a general Sci-Fi/Fantasy and Hammer movie timeline to depict what prior influences resulted in their productions and how they in turn influenced the next films down the line.

As such he bookends the Hammer chapters with a short history of Science Fantasy before and after. For the early years he even manages to draw attention to some films I had never even previously heard of (Verdens Undergang, Just Imagine). In the later chapter he highlights the similarities between James Cameron's Avatar and Hammer's Slave Girls making me for the first time wanting to see it. Avatar that is, not Slave Girls which I have already seen and enjoyed. And raises the possibility again that maybe, just maybe, New Hammer may eventually decide to tackle Quatermass one more time.

At first glance the films discussed in this book of course appear far more disjointed than, say, the Hammer vampire films reviewed in the first oeuvre. Needless to say Hammer's Science Fiction movies predated their Gothic Horrors and Hallenbeck does a great job in establishing a proper historical context for those.

He identifies the Dick Barton movies as the earliest examples of Sci Fi influence with Hammer. These were clearly part of their radio adaptations and quota quickies which led to them being involved with Robert Lippert, primarily in a series of Hammer Noirs though films such as Stolen Face also already displayed more overt Science Fiction elements. TV soon overturned radio as the prime source for entertainment, so Hammer continued the previously established trend to adapt the new medium's stories (The Quatermass Xperiment) which in turn eventually led to Hammer's more famous coloured Gothics. From then....

Ah, who am I fooling? It's all in the book and Hallenbeck narrates the history of events far better and way more in depth than I could ever do.

When it comes to reviews Hallenbeck is no undiscerning fanboy but he is able to see the beauty and fun in films that have often been unfairly relegated to the sidelines: Moon Zero Two, Slave Girls, The Lost Continent et al all get their fair due. When a turd is a turd he lets you know but in all cases he gives a very fair and always highly enjoyable evaluation of the film's merits and also includes references to Sci-Fi elements in their Journey to the Unknown, a TV show I have yet to continue covering to my shame.

Martine Beswicke provides the foreword and dispells the myth that she was one of the dancers in the Dr. No credit sequence, a myth that I was only too happy to embrace when I first came across it and probably did my fair share over the years to distribute further on. At last we can now lay this one to rest.

Denis Meikle is co-author of Chapter 3.

Hammer Fantasy & Sci-Fi is available through Amazon but I'll be damned if I give you that link as the best offers are directly from Hemlock where right now you can order this as well as The Hammer Vampire (in a new cover: Thanks for listening) for just £26.95.
Posted by Holger Haase at 8:12 PM

This increasingly appears to be a must buy book. I much prefer the new cover to THE HAMMER VAMPIRE, so I might have to take advantage of Hemlock's offer.

Yeah, the new cover is much nicer. I am glad they changed it. The old one really in no way properly represented Hammer to me and IMHO ended up doing this otherwise excellent book an injustice.