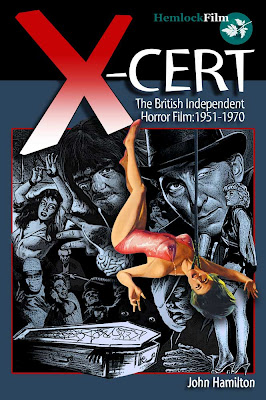 We have books on Hammer. Lots of them.

We have an excellent overview over Amicus courtesy of Little Shoppe of Horrors #20 and a controversial Dark Side publication Amicus: The Studio That Dripped Blood. The original author did an Allan Smithee and removed his name but say what you like about the contents this is still beautifully illustrated.

In recent years we also got Beasts in the Cellar: The Exploitation Film Career of Tony Tenser to focus on Tigon Productions. (I haven't read this yet but according to all the people whose opinions I value, this has my name on it.)

So what is left in terms of a more specialised approach to Classic British Horror?

Ah yes, an overview over the independent UK Horror movies of the time.

John Hamilton, author of Beasts in the Cellar, has now taken on the task of filling that gap on the book shelf.

Published by Hemlock this volume will be instantly familiar to those who have previously read Bruce Hallenbeck's recent Hammer books. It features the same size and style of artwork and is richly illustrated, mainly in black & white but also with a separate 8-page coloured spread.

Given the complexities of film financing and international co-production deals at the time Hamilton mentions in his introduction the difficulties in coming up with a definitive list of what constitutes a) a British, b) an Independent and c) a Horror film and freely admits that his list is probably subject to debate. As such I am not even going to bother arguing which films should or should not have been included and am just enjoying his chronological overview of all the films from Mother Riley Meets the Vampire to The Corpse/Crucible of Horror.

Each of his entries is rich in historical detail and intelligent critique and low on synopsis just as it should be.

As this book primarily focuses on x-certified “adults only” movies of the time we get a good overview over the changing mores, involvements with the censor and political legislation with regards to film productions during those two decades.

For one we have the usual genre stalwarts, often on a break from Hammer, such as Terence Fisher, Peter Cushing, Christopher Lee, Boris Karloff, Anton Diffring or Michael Gough.

Even more interesting, however, are those that are on either end of their career spans: a young Sidney J Furie directing Dr Blood's Coffin or helping to supervise the making of Devil Doll; a mature Joan Crawford going Berserk! for Trog.

For some like Michael Powell producing a film like Peeping Tom would put an end to an illustrious career. For others like Bryant Halliday (Devil Doll, Curse of the Voodoo, The Projected Man) these films were practically the sole reason that they still feature somewhere in the footnotes of cinematic history.

The book is full with details about short-term production companies such as Planet, Gala or Eros Film Distributors some of which were only ever set up for one film to avail of a government deal, then were disbanded or re-formed under a different name to ensure that they would again be eligible for the very same State sponsorship.

If there is one single name that comes up time and again providing something of a narrative throughout the two decades' worth of indie film history it is that of  Richard Gordon. He was single handedly responsible for the largest bulk of the movies in this book. Having established a friendship with him over the years, the author then rounds up this tome with a very personal and heartfelt remembrance of this multi-talented business- and showman who – outside of the Great Three Studios – did most to provide the British public with their share of chills and thrills.

If there is anything major that this book could be criticised for it is mainly by sins of omission. I personally would have loved to see the topic extended to the 1970s, a decade that probably proved to be the most fascinating for British Independent Horror films with the likes of Pete Walker, Norman J Warren or Mike Raven around.

A little birdy has, however, told me that a possible follow-up volume may be on the horizon at some point in the future which will no doubt make a great companion piece to this edition.

X-Cert is available both through sellers at Amazon US and UK as well as through Hemlock's own website.