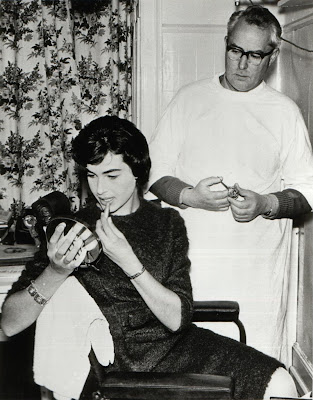 Ever since I purchased this photo a couple of years ago I've been wondering who the woman in this picture is. The guy is of course Roy Ashton, Hammer's Make Up man extraordinaire, but I have no idea what the occasion for this shoot was and who the other person is. I have since asked a handful of other Hammer fans, none of whom was able to assist, so this is now an open appeal to the world at large: Can anyone identify who the woman in this photo is and maybe even identify what film was being produced? (I am of course assuming that this is from a film shot, though even this fact is far from certain.)
Posted by Holger Haase at 12:46 PM

Did you try the experts from the UK magazine "SFX"! They have a series of articles each month called "Ask the SFXperts". I am sure that they can help you! Worth a try! Good luck!

I think that the girl is actress TRACY REED, cousin of Oliver Reed.
Perhaps she is visiting the filming of PARANOIAC.

Hi everyone, I haven't visited my own blog for a while as I was away for most of September. Thank you so much for all your responses. Great idea to check the SFX! site. And the suggestion that this may be Tracy Reed is indeed a good possibility. I'll venture further along this angle.