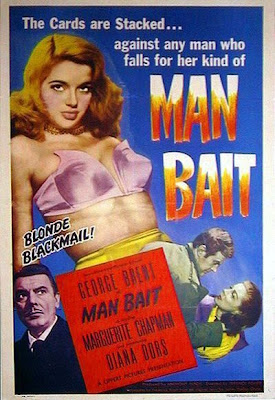 Man Bait is one of those Hammer Noirs that had much more effective and lurid titles in the States than for their British releases. In the UK it was more widely known under the more obscure title The Last Page that was in a way referring to the fact that this film had a very unusual setting placed primarily within the confines of a second hand book store.

Based on a play by thriller writer James Hadley Chase this film focuses on a blackmail attempt gone wrong, leading towards a murder chase against the innocent manager of the store.

It is a fast paced and entertaining production directed by Terence Fisher in his first assignment for Hammer so in that regards this is indeed a key film for the production company. It is also of importance as it brought Hammer’s James Carreras together with Robert Lippert, thus ensuring a lengthy relationship that helped see the release of their films in the US.

The actual plot is more than convoluted and forced (SPOILER ALERTS): We are expected to believe that shop assistant Ruby Bruce (Diana Dors) is so naïve to make a date with a guy who she catches stealing a book (Peter Reynolds). When she accidentally rips her blouse on a shelf and then very very briefly snatches a quick innocent kiss from her boss (John Harman) we are then to believe that she does not find it the slightest bit weird that her new boyfriend (who she had hardly exchanged ten words with) demands she blackmail the boss. The boss of course does not fire her or bring her to the attention of the police as he threatens. Nay, not even when his frail wife dies of shock when receiving a letter about the non-incident does he do what anyone with half a brain would do and instead fires more than the demanded sum at the Dors character. Even worse, when she accidentally gets killed herself (I told you this was getting convoluted), he doesn’t simply relate everything to the police but instead goes running for no apparent reason bringing all suspicions on himself.

At one time this film saw its release as part of a Double Feature with Bad Blonde. Strangely enough Diana Dors was presented as a new “introducing” actress, yet already had been in film for about five years with a dozen movies to her record. It was, however, this production that established her name in the US. Dors would later re-appear for Hammer in Children of the Full Moon, an episode for the TV Show Hammer House of Horror. Quite interesting to see that she was therefore associated with Hammer’s earliest productions as well as with their last ones, though never with their classic phase.

Phil Leakey provided the Make up; Jimmy Sangster is again listed as the Assistant Director.

In short: Forced plot, but fast and entertaining and at least of important historical value for Hammer.

I love thrillers set in bookstores and libraries. As a bookish sometime-librarian myself it makes everything so much more exciting (though I'm told a solicitor had his coat stolen in the library I work in last night... drama!).

The Last Page is one of the first non-horror Hammer films that I saw, and watching it again recently it is quite fun. A bit far fetched yes, but I like to imagine that's how people were in the 50s!

If you think that's convoluted, wait till you come across titles like Death in High Heels!

Death in High Heels? Never even heard of it, but it sounds like a great title. And according to IMDB it is only 48 minutes long, so I guess it won't overstay its welcome too much.