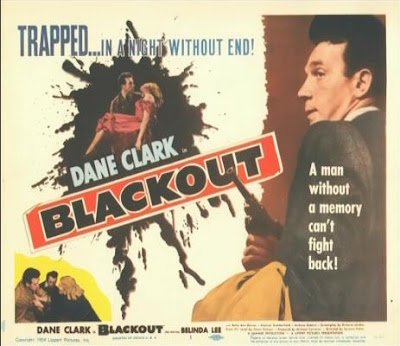 Blackout is the first Hammer Noir I came across that can properly claim to be on a level with the classic Hollywood Film Noirs. Most of the other Hammer Noirs I have seen were all passable. I have yet to find a truly dreadful movie of that subgenre, but I also hadn’t experienced a really outstanding one until I watched Blackout (original UK title: Murder by Proxy).

A man down on his luck (Dane Clark) drowns his sorrows in a bar and meets a stunning Blonde (Belinda Lee) who offers him £500 to marry her. The next morning he wakes up in the apartment of yet another dame with the mother of all hangovers and no recollection of what happened the night before and soon finds himself in the centre of a murder investigation desperately trying to clear his name.

That kind of plot is the stuff that proper Noirs are made of. There’s nothing like seeing an innocent amnesiac caught in a web of deceit of scheming ladies and scumbag lawyers to get you in the mood for bourbon, babes and cigarettes.

Tightly plotted (courtesy of Richard Landau) and excellently directed by Terence Fisher, Blackout also offers great acting all around. With three Hammer Noirs to his name Dane Clark (who also appeared in The Gambler and the Lady and Five Days aka Paid to Kill) would prove to be Hammer’s most popular Noir lead. Belinda Lee is absolutely amazing as an archetypical Film Noir Blonde. She oozes sex appeal and charisma and is able to be both cold as ice as well as charmingly warm or even vulnerable depending on the situation. It’s a pity that she died far too young at the age of just 26 following a car accident.

As in a lot of other Hammer films at the time Jimmy Sangster is again the Assistant Director.

There are still a number of other Hammer Noirs waiting for me, so fingers crossed I can find some more of those gems.