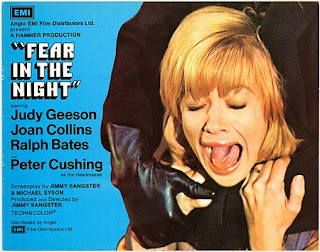 I really like FEAR IN THE NIGHT as well Holger. Its good to see a positive review for it.

This is one of those Hammers that I've previously ignored too, but after this post I'll dig it out of the Hammer Collection Box Set and give it a spin... I've been swayed to check out the Eureka Blu-Ray of Paranoiac as well, another Hammer thriller I dismissed...

Yes... this one is numbered high on my list of "why do people say such bad things about it?"

Great review. More people should do what you did and give this film a chance.

Oh great to see I am not alone. Funny, Wes, you mention the Hammer Collection Box Set as this was the last of the ones on it I was unfamiliar with that I finally watched after owning the set for a few years! I expected to be bored to pieces but was positively surprised. Maybe it helped to have small expectations but it's definitely worth a watch. Cushing's shattered glasses have become some of my favourite images of him!

I also dismissed this one even though I had seen that creepy image with Mr. Cushing and the shattered glasses on a few pieces of cover art in the Ultimate DVD collection. I'm SO glad I popped it in the DVD player and gave it a shot, because it's a WONDERFUL film. Sangster proved that he had a solid grasp of the camera as well as the page with this one, and all the performances working with the location and production design make this one of my favorite Hammer Films.

Great to see the FEAR IN THE NIGHT love (or at least: appreciation) spreading. ;-)